THROUGH THE WARDROBE: How C.S. Lewis Created Narnia

Last fall I attended the SCBWI-Carolinas panel in which Lina Maslo co-presented "Bringing Your Voice to Non-Fiction."  I heard about her forthcoming book, THROUGH THE WARDROBE which she wrote and illustrated.  Immediately I knew I wanted to share it with all of you--and with my grandchildren. 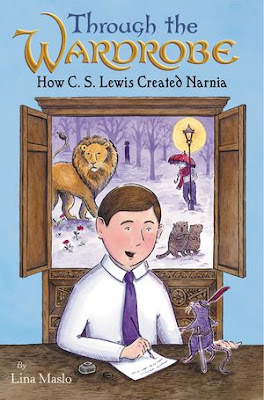 This non-fiction picture book provides enough details about C.S. Lewis's childhood and adult traumas to help the reader understand how the world of Narnia came into existence.

"As a boy, Clive Staples Lewis did not like his name. He imagined himself as more of a... Jack. When he was four years old, he changed it." 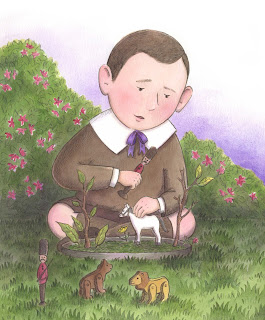 Since Jack didn't always like his own world, he imagined and wrote about other worlds. That was a precursor of things to come.

Jack lived in Ireland where it rained a lot. He and his older brother spent hours reading about talking animals and knights in armor. They made up a world populated with frogs, mice, and rabbits who argued about politics and went on quests to defeat evil cats. Conquering evil played a part in Jack's early stories. 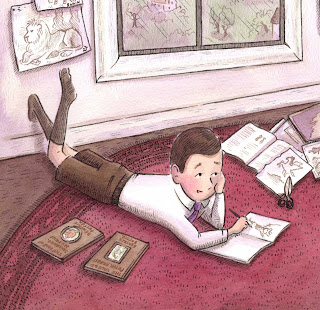 Jack's pleasant childhood ended when he was nine. His mother died and he and his brother were sent to a boarding school in England--a horrible experience for him. Jack finished his education with a tutor and was on his way to being a teacher when WWI broke out. Jack went into the army but was determined to be a writer. After the war, he "pushed his imagination away." He taught at Oxford University and wrote many books about "pain, faith, love; about medieval times; about people discovering strange planets."

"But in the back of his mind, Jack had characters waiting for a story of their own." 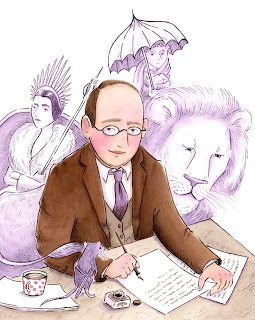 During WWII, Jack took in evacuees. One day, a little girl asked him if there was anything behind [his] old wardrobe. 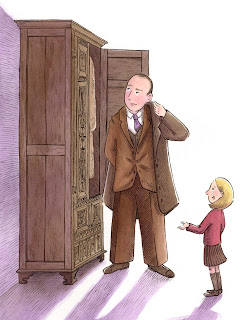 That started him thinking. He "decided to write a fairy tale...about a land unlike the dreary one they lived in, and about the characters in his imagination."

Jack's publisher, and his good friend, J.R.R. Tolkien, didn't like his first ideas about Narnia, so he put it aside. But when he got sick, he decided he didn't care what others thought. He would write a story about four children who had been sent far from home during the war. "It was raining, and they were stuck inside a house of endless hallways. They found a wardrobe and crawled in. But as they pushed back the old fur coats, they fell into a magical realm..." 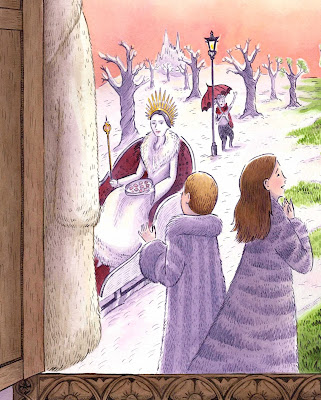 Narnia was a place that children learned about characters who stood up to bullies and that "the worst moments of your life were only leading you to become the person you were meant to be." 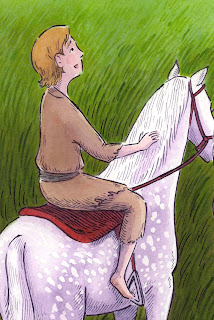 Children wrote to him and begged for more stories about Narnia. But by the time he wrote the seventh book, he knew he was finished. "This time, it was up to others--to discover a world only they could imagine and to find the door they were destined to open."

Look closely at the clever cover of the book pictured above and notice what Lina incorporated into it. If you get the book for a young reader--as I hope you will--you'll discover that the hardback cover is a wardrobe. Young readers open the doors of this beautifully written book and step inside C.S. Lewis's life.

Make sure you don't skip over the endpapers. In the front are imagined letters from children to C.S. Lewis. Since he destroyed all of his correspondence, Maslo created these. The back endpapers are actual letters from Jack to children which can be found in C.S. Lewis: Letters to Children. Back matter includes interesting facts about Jack and an extensive bibliography.

I love stories within stories and in fact, this is a picture book about a man who loved reading and writing books. The illustrations are accessible to children; the color pallet which Lina Maslo used is beautiful. Although C.S. Lewis ages in the book, he still has a child-like wonder in his facial expressions.

I bought this book for my not-quite-five-year-old granddaughter since I knew her father had already read The Lion, The Witch, and the Wardrobe to her. During the Covid quarantine, my daughter suggested that I read books to her via Skype. I happily obliged. After my granddaughter received Through the Wardrobe she asked if I could read it to her. I was glad I had saved the F and G's so I could read the book to her.

I have a special giveaway for you! Lina Maslo is donating a personally autographed copy of THROUGH THE WARDROBE for you or for a young reader in your life. All you have to do is leave me a comment (please include your email address if you are new to my blog) by Friday, June 19 at 5 PM. Want extra chances? Share this on social media and tell me what you did.

I'd love a chance to win - my girls loved the Narnia books!

And you would love reading this to your grandkids, Susan!

When I was a young reader, I devoured nonfiction books about writers -- Cornelia Meigs, Louisa May Alcott, A.A. Milne, and more. I'm so glad Lina Maslo wrote about C.S. Lewis and how his life shaped his stories, so young readers will know that adversity often births creativity.

Thanks for sharing this book with us. It looks like a great way to introduce my granddaughter to the magic of Narnia!
I shared this blog post on Twitter and Facebook.
Blessings!
Connie
cps1950(at)gmail(dot)com

Thanks Kim and Connie. Connie--you're in three times! Thanks for shaing.

This sounds like a fascinating book, Carol. I love reading about how authors conceived their works especially when the stories have become so famous.

I love the Narnia books and finding out more about the author through a book is awesome. Thanks for the post and chance to win a copy. I shared on tumblr: https://yesreaderwriterpoetmusician.tumblr.com/post/621190955792531456/through-the-wardrobe-how-cs-lewis-created

Thanks Sandra and Danielle. Danielle--you're in twice!

This looks like a lovely book and I'd love to be in the drawing. Thanks for the great review, Carol.

Oh I know my nephew is going to love this book.
turtle6422 at gmail dot com

I love the Tales of Narnia! It's intriguing how we unknowingly put our lives into our writing. Enjoy your day being your sweet self.

Thank you for writing your blog.

thanks Joan and Jana Leah. You're both in !

Yes, I know you and your grandkids would enjoy this book, Jo Lynn!

Thanks, Dorothy. You're in!

Thanks everyone for your comments!!

Excellent review! Now, I plan to find this book and buy it.