The Voice that Won the Vote: A Review and Giveaway

Congratulations to Barbara Younger who won a copy of Racoon's Perfect Snowman from last week's blog. 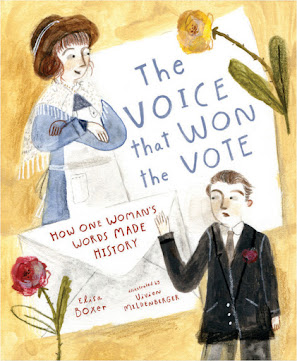 After I read The Voice that Won the Vote: How One Woman's Words Made History (Sleeping Bear Press, 2020), I realized that the cover and title were perfect. Inside the book was an unexpected story written by Emmy-winning journalist, Elisa Boxer. Illustrator Vivien Mildenberger's kid-friendly illustrations draw readers into the story.

The book opens by showing contemporary women lined up at a polling booth. 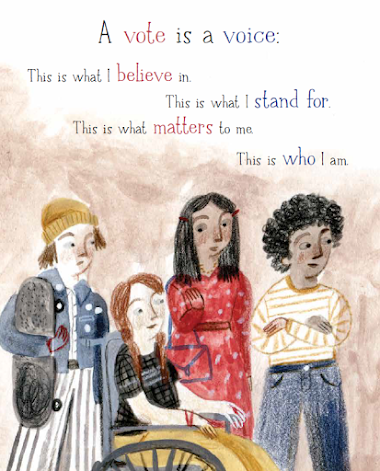 Very quickly, the author turns the clock back to 1920 when women were denied the right to vote. Boxer tells the reader about Febb Burn, a woman in East Tennessee who studied, went to college, became a teacher, and had a farm. 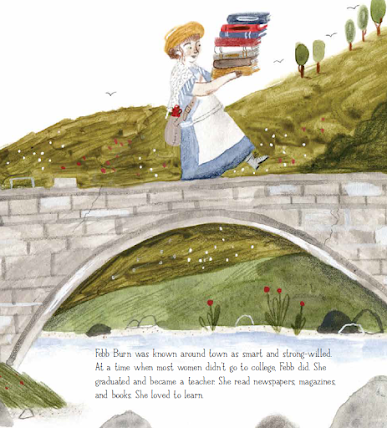 Every year on election day the men on her farm would head to town hall to cast their votes.

And every year, Febb Burn would watch them go.

She was sick and tired of staying home, shut out of the process. 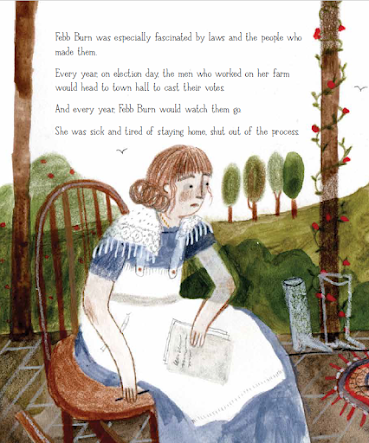 So, she sat on her front porch and wrote a letter.

A few days later that letter arrived on her son Harry's desk.  He was the youngest lawmaker in Tennessee and a witness to history in the making. 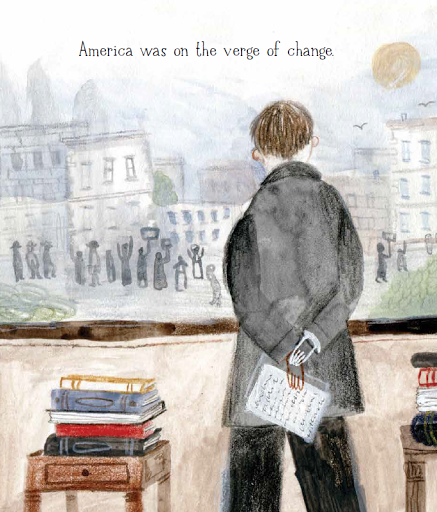 Thirty-five states wanted women to vote, but the country needed thirty-six to make it law.

It all came down to Tennessee, the last state left to vote.

But the lawmakers in Tennessee were divided. Half wanted to allow women to vote, half didn't. After the first vote was tied, the lawmakers had to vote a second time.

It was a soul-searching moment for Harry Burn. Previously he had voted against women's suffrage. Most of the people he represented hated the idea of women voting and many of them were in the audience that day. I imagine he thought about the note he had received from his mother: 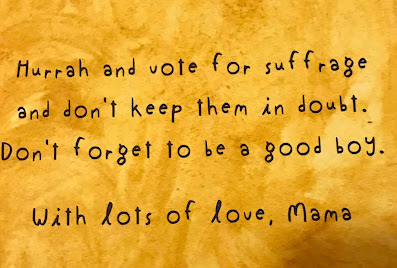 (Image of the back cover.)

He surprised the other legislators and broke the tie by saying, "Yes." 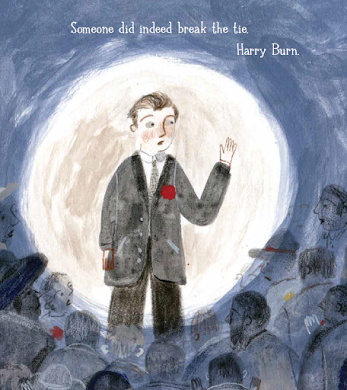 When Harry was asked why he changed his vote, he replied,

"I know that a mother's advice is always safest for a boy to follow."

The people who elected Harry were shocked and angry. Harry understood that his decision probably cost him his political career. But, he told reporters:

"I am happy simply because I followed my conscience. It kept telling me women are people."

It took courage for Harry to stand up for his beliefs. At the next election, he and his mother were probably worried what the results would be. But when the votes were counted, they were thrilled when Harry was re-elected to the Tennessee legislature. 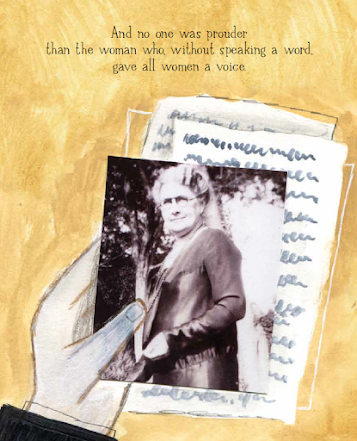 And no one was prouder than the woman who, without speaking a word, gave all women a voice.
The book ends with a long author's note about the pressure both Febb and Harry faced after his historic vote. It includes how the women's suffrage movement was linked to the anti-slavery movement. A pictorial timeline of significant events is also provided.
This book will be useful in second-fifth grade classrooms. You can download the teaching guide if you search for the book using this link.

Since I love knowing the story behind a story, I reached out to author Elisa Boxer to find out how she discovered this little-known story of Febb Burn. Here is what she wrote:

"As a journalist, I've always been drawn to researching unsung heroes. So a couple of years ago, when I decided to write a book about the upcoming 100th anniversary of the ratification of the 19th Amendment, I searched online for little-known women in the suffrage movement. When I came across the story of Febb Burn, and learned how she helped save suffrage by writing a letter to her son at a time when society was trying to keep women small and voiceless, I knew hers was a story I wanted to tell. Especially because there were no books about her!"

Leave me a comment by 5 PM on November 20 and I'll enter your name. Make sure you leave your email address if you are new to my blog.

Never heard of Febb - great story. I'd love to be entered!

Hooray for 100 years of voting! Would love to read this to Jonathan.

Was having trouble making a post, so trying again. This is a great story! My grandmother would have been 20 when the amendment passed and knowing her, I’ll bet she was one of the first women voters! She also worked as an election judge later.

I love the illustrations. This looks like an important book to add to our voting history story.

This sounds fascinating! Thanks for introducing me to Febb Bunn and for this chance to win.
Blessings!
Connie
cps1950(at)gmail(dot)com

Thanks Connie, Theresa, Carrie, and Jo Lynn. YOu're all in!

I've also never heard this story. Would love to win a copy! Thanks for the chance.

Today is the perfect day to feature this inspiring book--in 1872, suffragette Susan B. Anthony is arrested by a U.S. Deputy Marshal and charged with illegally voting. Thank you for the chance to win a copy!

Danielle, I didn't realize that. thanks for passing that info along. You and Melissa are in the giveaway.

This looks like an amazing book to add to my library. Thank you for doing a giveaway.

Thanks for stopping by Diana. I need your email address to enter your name in the giveaway.

I had never heard this story before - looks like a great one to share with my daughters!

what a wonderful story. the hand that rocks the cradle indeed can change the world. congratulations elise

Thanks Vijaya and Wendy. You will both enjoy this book!

This story sounds amazing! I can just imagine Febb fuming while watching all the men go to vote. What an inspiration! Would love to win it.

Dear Carol,
Great story and illustrations in "The Voice that Won the Vote."
Don't put me in the drawing. Thanks.

Never Give UP
Joan

A perfect book to give to my niece.
turtle6422 at gmail dot com

Thank you Jana Leah, Joan, and Gwen. I know each of you would enjoy this book. (And I won't put your name in Joan.)

What a wonderful story (and one I did not know). And I LOVE the art. I'd love to read the book myself and then give it my granddaughters. Thanks for this and all your wonderful giveaways!

Happy to enter your name, Barbara.

What a fun story. I had never heard of these people, but what a difference they made. Thanks for the post.