SILLY BOOKS FOR KIDS (with not-so-silly messages): 2 REVIEWS AND 2 GIVEAWAYS

I'm slowly making it through my to-be-reviewed shelf (which keeps getting replenished by publishers and publicists sending me books!). Last spring I received these two books from Sleeping Bear Press and I'm now getting around to sharing them with you. 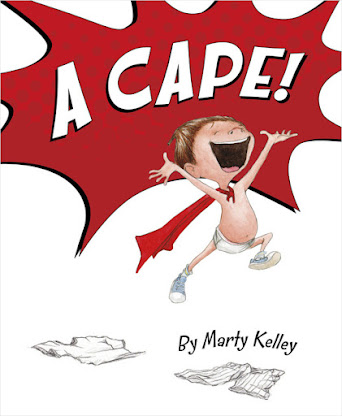 Author-Illustrator Marty Kelley's book begins and ends without words. In fact, I bet the entire book has less than 150 words. But his line art tells a story that every preschooler will be able to read.
The story begins as soon as the reader opens the book to see the main character jumping, leaping, and giving a thumbs up as he tries out his cape. The initial textless pages are in black and white...except for a red towel that the little boy discovers in a linen closet.
The towel, of course, becomes his cape. 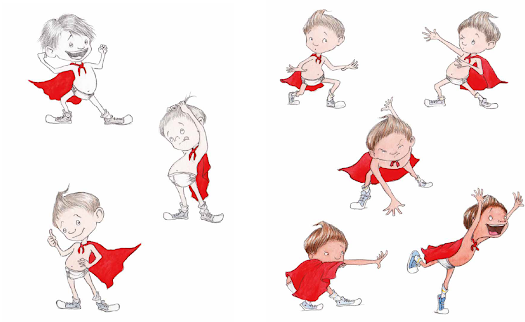 Study this spread. Do you see how the boy begins in black and white and the character gradually gets colored in? Do you see the expressions on his face? The story's action is communicated through the illustrations.
He announces to his father (who is almost always shown in black and white): 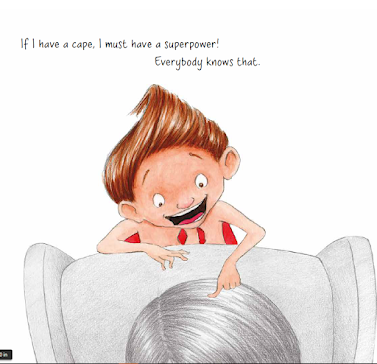 On the next page his father answers: "Hmmmmmhmmm."
That begins a pattern with the boy looking for his super power. He thinks it might be super strength, invisibility, or flying. 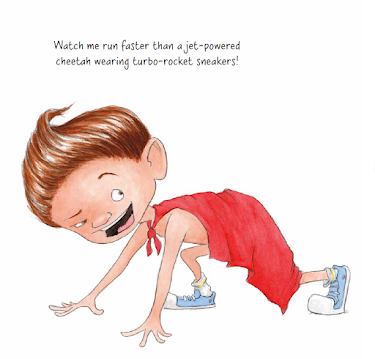 Each time his father answers with a typical disinterested, parent response. "No running in the house."
When the little boy becomes discouraged because everyone who has a cape has a super power, his father puts down his iPad and says,
"Well, you have a super powerful imagination. Not everybody has that."
And with that, the boy pushes his father off his comfortable chair and gets just what he needs: 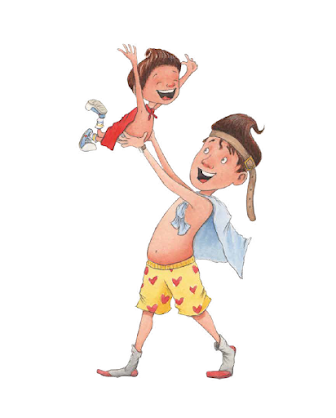 Someone to join him in his super-power-imagination playtime!
Check out the rest of Marty Kelley's books on his website.

Author Robin Newman had a great idea. What kid won't want to read a book with the word "butt" in the title? And illustrator, Susan Batori, portrayed the text with humor and a touch of animal empathy. 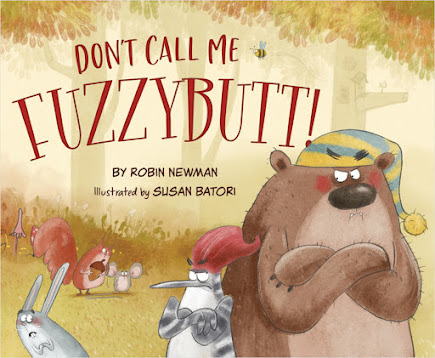 Bear has a problem. If he doesn't get enough sleep, he turns grizzly. 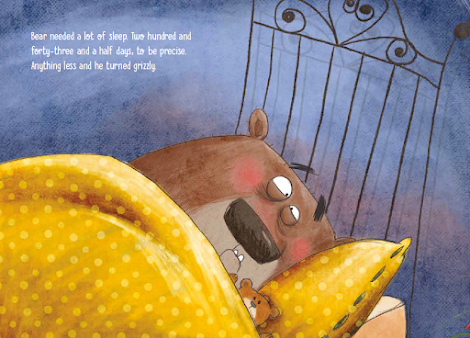 Since he is a light sleeper, he prepares for his 243 (and a half) days of sleep. 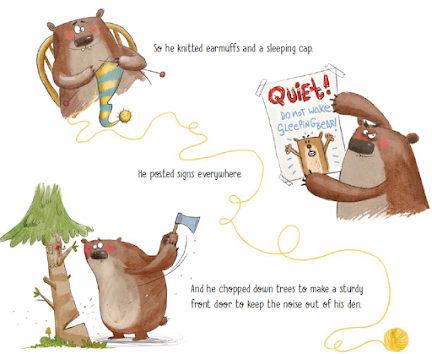 But, that creates a problem for Woodpecker. 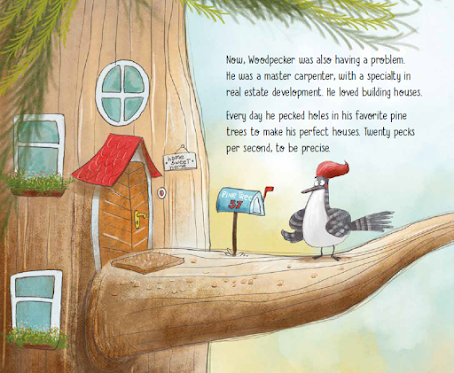 When Woodpecker goes looking, he finds remnants of his homes scattered on the ground. He goes straight to work pecking and building.

Which leads to a very angry bear confronting an equally angry bird.

With hurt feelings, Bear tucks himself into bed. But Woodpecker is upset too. He apologizes and the two of them put their heads together to figure out a solution. 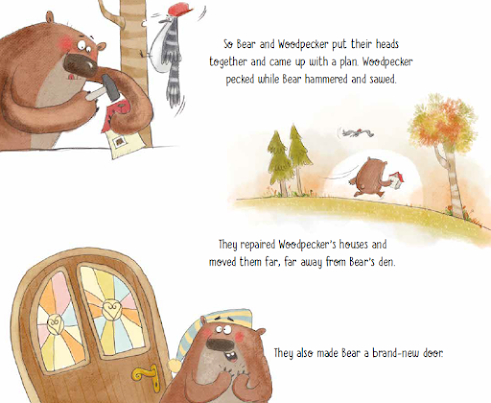 After Bear wakes up from his long sleep, the two friends can't figure out what a fuzzybutt is, and as they say, they live happily ever after.

Authors often want to include a message in their books. I admire how both A CAPE! and DON'T CALL ME FUZZYBUTT! have positive messages of imagination, respect, friendship, and problem solving are woven into these stories.

I'm giving away both of these books. To enter, leave me a comment by 5 PM on Friday, August 27; continental United States addresses only. MAKE SURE you leave your email address if you are new to my blog.

Thanks for spotlighting the SILLY in books! We need more SILLY! Both the books do a great job of tapping into the joy of playing and the real-world interaction of kids who get pushed out of shape—but can still be friends! Great messages!

These both look absolutely delightful! I love Marty Kelley’s books and am always excited to see a new one. Don’t Call Me Fuzzybutt has been on my to-read list for a long time. Thanks for sharing a sneak peek, and thanks for the opportunity to win a copy!

Patricia, thanks for leaving a comment but I need your email address to enter your name in the giveaway!

You're welcome Becky. I'll start the giveaway list with your name!

I've seen both of these on the publisher's website and appreciate your post today. Both look heartwarming and fun and will make excellent mentor texts too. I have a draft of a manuscript that A Cape! will be useful for in revisions. I especially love the twist at the end of this book.

These books will delight young readers and have them laughing from beginning to end!

Carol, Thank you so much for the lovely review. It's fuzzy-tas-tic!

Thanks, Robin. Glad you liked the review! Some fortunate winner will receive it in the mail!

Such a great issue. Kids love to laugh but it must tempered with other emotions for the real enjoyment to be appreciated. Thanks for this issue, so necessary.

Silly books are so perfect for the pre-school age (and my age!!). These both look so cute. Thanks for telling me about them and for a chance to win.

Capes and butts! Perfect for the kids in my life! I'd love to be entered in this giveaway. Thanks, Carol!

My son wore a cape for many weeks when he was a little boy. I had to sneak it away while he napped for washing. Oh, those were the days! Thank you for a fun post! Not to even mention: Don’t Call Me Fuzzybutt. :)

I'd love to be entered - these look really fun! Thanks!

I'm fortunate enough to have a copy of Don't Call Me Fuzzybutt!. It's a fun and funny book.

Yes, It is. Check out A Cape! too Janet. Very clever. (Sorry, giveaway is over though.)