THE KITE THAT BRIDGED TWO NATIONS: A Picture Book Review

I can't seem to get enough of beautiful nonfiction picture books. I'm particularly drawn to "unknown heroes" who authors discover and bring to life. As my husband's 91-year-old uncle has said to me many times, he wishes he had books like those when he was a child. 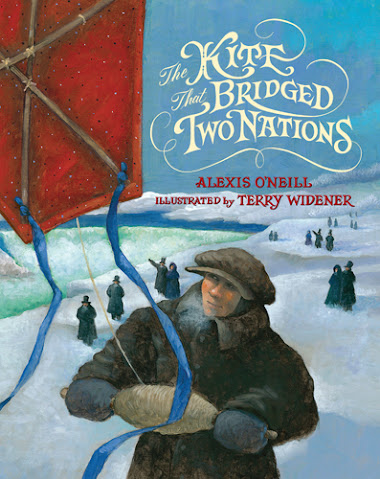 The Kite That Bridged Two Nations (Calkins Creek, 2013) is the second picture book by Alexis O' Neill that I have reviewed. (See Jacob Riis's Camera for the first). Both books capture the protagonist's emotions and a great many details that makes each book memorable.  Jacob Riis's biography spans most of his life and is written in third person POV narrative with a few free verse poems. Kite is a slice of life story based on the true story of Homan Walsh, the 16-year-old teenager who flew a kite across Niagra Falls and is written in free verse first person POV.
Here is the first illustration and the accompanying text. (Note the poetic use of alliteration and personification.) 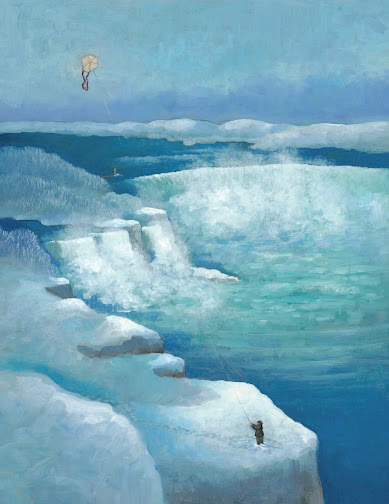 Whenever wind lifted off the river

and sent the trees to dancing,

I'd race to the great Niagra,

wind licking at my face.

which day would be perfect for flying kites.

Homan's family immigrated from Ireland. His merchant father wanted him to focus on his studies. Instead, Homan studied the wind, the lift of his kites, and how much line he needed.

Homan heard of a kite-flying contest. Ten dollars would be awarded to the person whose kite spanned the falls. That person's string would be the beginning of a bridge between the America and Canada.  Homan got to work.

He measured, cut, and used over a thousand feet of string to reach across the gorge. When Homan was done, he named his kite, Union.

Homan trudged through the snow with a "confetti of kites" flying in the wind, climbed down "endless stairs" and took the ferry across the "roiling river" to Canada. Marvelous illustrations depict this momentous day and how "the inky night spilled on the sky... and the crowds urged him on." But then...disaster struck. 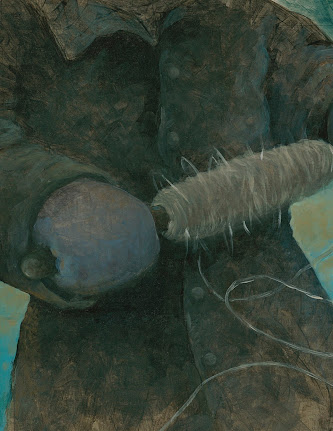 As midnight dropped, so did the wind,

a landing near at hand.

Now with a jolt, the string pulled tight.

It caught and held.

Then suddenly, a sag, a jerk.

It snapped on ice below.

Although Homan wanted to find Union, "ice choked the river's throat" and blocked his journey home. After eight days the ferry ran again and he was able to return home, where his father placed his broken kite in his hands.

At last, when "a favored wind was blowing" Homan retraced his steps to Canada. This time, he stood on the Canadian cliff that was closest to America and "in that calm, the string spooled out!" 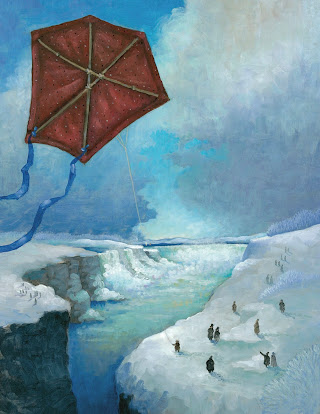 As if she knew

her purpose greater than to fly,

Union danced above the rapids.

She danced to heaven's gate,

and then she landed swiftly, safely, strongly

on the American side.

The prize was mine.

was my father in the cheering crowd.

Thick strong lines were attached to Hamon's kite's string. After that, Charles Ellet, Jr. strung a cable from which he built the first bridge to span the Niagra River. 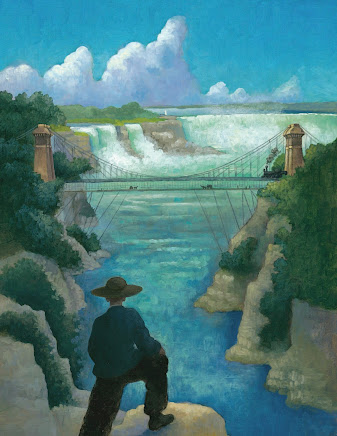 And though this happened in my youth,

this much is true:

whenever wind lifts off the river

and sends the trees to dancing,

I still itch to fly a kite.

Terry Widener's phenomenal acrylic paintings augment the text. Back matter includes an author's note explaining her choice of first person POV; the facts about Niagra Falls, the kite-flying event, the weather, and the ferry. I found it interesting that Alexis also mentions the facts she didn't know and what she supplied from her imagination. The rest of the story and a timeline of the Niagra Suspension Bridge, provide additional information for curious children (and adults!)

I asked Alexis a few questions about her writing process. I was curious how she found the topic and her decision not to write it as a straight biography. She said, "I heard about Homan Walsh through an editor who asked if I wanted to write a book about him and the kite-flying event. I researched it deeply, tried writing it as straight nonfiction, but it had no life and didn't get to the emotion of the contest and kite flying. So I switched to first person POV and suddenly the book came to life."
No giveaway this week since this book now resides on my "mentor text" shelf. But, here's a free download of the musical based on the book. There are several activities on Alexis O'Neill's website making it a great curriculum resource for grades three and up. And here's the book trailer:

Congratulations to Rosi Hollenbeck who will receive a copy of I WANT MY BOOK BACK when it comes out.

I also enjoy reading about otherwise unknown historical figures and events in picture books. Thank you for posting about this book.

We are like-minded Danielle. Thanks for commenting!

Dear Carol,
Intriguing story. Thank you for sharing. Please do not add my nsme to the drawing.
Joan

Yes, it is a great story!

What a great story. Interesting to put it in first-person verse. I'm looking forward to reading it. And there's a musical??? Wow! I will be looking for that. Thanks for picking me to win I Want My Book Back. It looks like such a fun book.

Great post—can't wait to read this book. It was so helpful to hear about only getting to the emotion with the switch to 1st Person POV. Thanks!

Thanks, Susan. I hope you come back for more picture book reviews and giveaways.