UNDER THE TANGERINE TREE by Esther Bandy: A Book Review by Guest Blogger, Elliott Kurta

Some of you know that one of my passions is teaching writing to teens and adults. I haven't had that opportunity for awhile, but I recently met a young man who loves to write. I've taken Elliott Kurta under my writer's wing and am excited to share his first book review with you.

Without further ado, here is Elliott's review of Under the Tangerine Tree, a debut middle grade book by Esther Bandy. 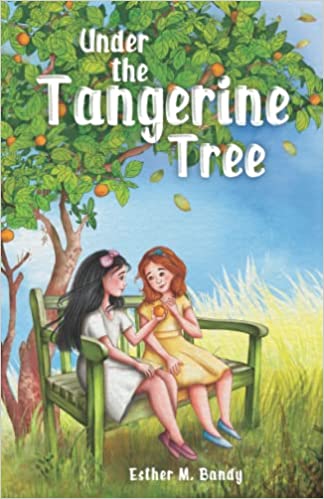 Under the Tangerine Tree is a Christian novel set in 1963, geared towards readers 9 to 13 years old, written by Esther Bandy. It details the adventures of Angie Mangione as her father is killed, causing her to move to Florida with her mother and five-year-old brother, Joey. Angie meets a cast of memorable characters along the way, including her best friend, devout and optimistic Melanie, embittered teenager Leroy, and friendless and ostracized Juan.

Esther Bandy does an exceptional job portraying young Angie and her little brother, Joey. Both characters are likable with natural dialogue packed with plenty of quips that betray their naivety. One of my favorite lines from the book is spoken by Angie, in response to her friend Melanie.

Angie frowned. “Just too what?”

You can find other instances of Esther Bandy’s wordplay present throughout her debut novel. "Angie felt like a mouse in a room of hungry cats" and "That smell pulled me right out of bed," are more examples of what you’ll find throughout Under the Tangerine Tree.

The Christian aspect of this book is not apparent until nearly a hundred pages in. From then on, references to God are frequent and there appears to be an unexpected paradigm shift. I was surprised by the sudden appearance of religion in a seemingly neutral novel, especially given its intensity. However, if readers take this change in stride, they’ll find the rest of the book enjoyable.

Not a single page of Under the Tangerine Tree is wasted; even when the plot appears to slow down, Esther Bandy is simply planting references that will be tied together later. The characters in Under the Tangerine Tree have complicated yet easy to follow personal histories. The book begins on a sad note, the death of Angie’s father, but is not overly melancholic. Esther Bandy jumps right into her story, quickly introducing us with goals and obstacles that reveal more of Angie’s, Joey’s, and Mama’s personalities. Some characters, such as Leroy and Granny, appear at first to be archetypical. However, their unique histories defend seemingly stereotypical behavior.

Throughout Under the Tangerine Tree Angie struggles with her father’s death and accepting God as well as better understanding the Bible, but ultimately comes to terms with each issue. Towards the end of the book, Angie accepts God and as a result, is brought closer to her family and friends. Angie has changed as a person, becoming more understanding and devout, and readers will like her all the more because of it.

In conclusion, the religious aspect of Under the Tangerine Tree might not appeal to readers of other faiths. However, middle schoolers can appreciate the relatable and original story present throughout Under the Tangerine Tree. Esther Bandy’s storytelling will surely inspire children and help them discover what it means to be a Christian with her moral-rich writing.

I am giving away a copy of Under the Tangerine Tree. Leave me a comment on this blog and you'll receive one chance; leave another on the author interview and you'll receive a second chance. U.S. addresses only. If you prefer not to leave a comment, email me and I'll enter your name. PLEASE LEAVE YOUR NAME AND EMAIL ADDRESS IF YOU ARE NEW TO MY BLOG.
Congratulations to Danielle Hammelef who won VALENSLIME from last week's blog.
at February 01, 2022

Excellent! Super! Good job! Great, Elliott!
(That's one of my "teacher cheers" I share with my students.)

I enjoyed reading the review you wrote for UNDER THE TANGERINE TREE.

So pleased to know you are a reader and a writer.

All the best with your studies.
Suzy Leopold

Thank you Suzy--Elliott did a great job sharing Esther's book. Glad you enjoyed it.

This sounds like a wonderful book! It sounds like one I would enjoy sharing with my grandchildren!

Thanks, Trish. You're in!

I am intrigued. I think the title is especially catchy. Theresa Pierce

This review was so well thought out and very organized. I'm impressed and think this young talented writer is off to a excellent head start.

I agree, Danielle! He's going places! (but first on my blog!)

Thanks, Theresa. You're in!

Great review. I love mid-grade novels and your review certainly piqued my interest in the book.

Thank you, Gail. I thought you would be interested in the book! (If you don't win now, Esther will also be giving away a copy through W2I later)

Wonderful review. Thanks. I will pass on the giveaway.

Thank you all for your wonderful comments. I'm sorry it's taken me so long to reply.
Carol, thank you so much for adding my novel to your blog, and thank you for asking Elliott to review it.

Elliott, thank you again for writing such a thorough and thoughtful review. I look forward to reading more of your work.

I agree, Suzy. Elliott did a wonderful job. I'm glad you enjoyed his review.

Thank you for your comment, Trish. I hope you enjoy reading my book with your grandchildren. I have wonderful memories of being with my grandmother when I was young, and my novel includes many interactions between Angie and her little brother with their granny. I hope you enjoy them.

Hi, Danielle. I agree with you. Elliott certainly did a wonderful job on his review.

Thank you for sharing this giveaway, Rosi.

Thank you for all of your comments. Your support and kind words make reviewing books all the more rewarding.

I'm also extremely grateful for Esther Bandy and Carol Baldwin for presenting me with this opportunity. I look forward to working with you in the future.

Elliott—you are quite the talented reviewer. Very concise and clear with many points of why we should read this story. Keep up the great work. I do want to read this story but will have to pass on the giveaway with my stack of "to be read" books at an all time high. Thanks for joining us on Marvelous Middle Grade Monday.

Very impressed by Elliot's review, and I will definitely be back Friday for his author interview! Thanks for posting!

What an insightful review, Elliott. You captured what I wanted to know about the story with such ease. Good luck with your own writing. You're on your way!

Thanks Greg, Valinora, and Patricia. I know Elliott will be encouraged to read your comments!

Thank you so much for your words of encouragement and positivity.