Zora and Me: Multi-Racial Read #5 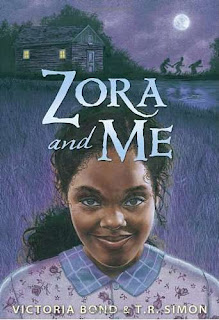 I didn’t realize when I selected Zora and Me from the audio book shelf of my local library that I would be treated to a powerful, multiracial historical novel. But I was.


Under 200 pages long, this book is the result of collaboration between Victoria Bond and T.R. Simon. Their fictionalized account of Harlem renaissance author Zora Neale Hurston’s childhood, brings the reader into gator country, Eatonville, Florida, during the Jim Crow period.
Zora’s outspoken manner and boldness is seen through her best friend Carrie’s eyes. The two young girls get caught up into the myth and mysteries of the local “Gator King” (half-man, half-alligator) which they imagine to be ghostly white. In a line foreshadowing later conflict, Carrie observes, “If coloreds can be different colors, why can’t gators?”
When Ivory, an itinerant turpentine worker is murdered, Zora decides to apply her alligator-sleuthing abilities to solving the murder. The story gets more complicated when the girls meet Gold – a woman who is beautiful, stylish, and colored but “not like us.” Gold is engaged to a white man and the black community is horrified that she has turned her back on her people.
In a powerful scene, the girls come across Gold sitting in the forest by a fire, her clothes dirty and in disarray. By the firelight Gold “looks colored but like she’d been wiped down by chalk dust.” Zora confronts Gold on why she has chosen to pass. Here are snippets from this dialogue revealing Gold’s conflicts and motivation:


Zora asks, “Why would you want to be like white folks?”
Gold replies, “I get tired of being colored. I get tired of seeing everything the world has to offer and settling for a big bowl of nothing."


During the same scene, Gold relays a story from her own childhood. Her mother was much darker than she was. When the two would go shopping, Gold’s mother would pretend to be her nanny in order to purchase what she wanted. Gold remembers, “It’s like I was the skeleton key unlocking the other world just for my Mama.” In this conversation Gold tells the two friends, “You’re both lucky. You don’t have to make hard choices. You know exactly where you belong.”
This is a powerful story about hurt, fear, and prejudice and two young girls coming of age in a town that had previously sheltered them from the bigger scope of life’s conflicts. As Carrie realizes at the end, “The bad things in life don’t define misery—what you do with them does.”
This book would be an excellent supplement to a class in US history, or to be read during Black History month. Although the two main characters are both girls, Ivory’s plight and the overarching historical theme make this also an appealing book for middle school boys. Students and writers should both analyze the internal and external conflicts permeating Gold’s, Zora’s, and Carrie’s lives. There is much to learn from this well-written book.


View this video for more information on Zora Hurston and the story behind the story:

Wow! This looks terrific! I shall have to read it!

I know I'd love this book. Thanks for pointing it out and giving such a through review and including a video clip. Looks so good!

Good luck with your own writing!

Carol, Thanks for sharing ZORA and ME. I didn't know about the book, but your post about it was compelling. I'm definitely adding it to my "Must Read" list.

I had never heard of it before either, but was really glad to find it. Great as an audio book too. Thanks ladies for leaving comments!

Thanks, LInda. ANother book for you to listen to in the car!

sounds wonderful, Carol. And your review is inticing.

thanks, Jean. I had fun writing it!