Not on Fifth Street: A Review and ARC Giveaway- Part I


If you're one of my faithful followers, than you're no stranger to Kathy Wiechman's historical fiction for middle grades. I'm proud to review her newest book, NOT ON FIFTH STREET (Calkins Creek, 2017), a fictionalized account of the flood of the Ohio River in 1937.

Two feuding brothers + one record-breaking flood = a fast paced middle grade book for boys and girls they won't be able to put down.

Thirteen-year-old Pete doesn't understand why his big brother, Gus, has become more interested in a girl named Venus than spending time with him and their friend Richie. They had been the Three Musketeers up until Gus met Venus. On top of that, a New Year's dinner where Venus is the guest goes sour and it's all Pete's fault.

Then the rain starts. Within days the mighty Ohio river is rising and the folks in Ironton, Ohio fear flooding. Pete looks at the river and thinks,


...out in the middle, the river surged like a fierce animal, whipping into waves that rose and hurried downriver. A tangle of branches floated past, carried in the swift current. Were they branches from an Ironton tree? Or had they traveled all the way from Pittsburgh?

Pete looked at houses and imagined them with muddy water up to the second-floor windows and people using rowboats to go places. He and Dad had fished on the river before. But that river was nothing like this wild, alive one. He hurried away as though it might reach out and grab him. (p. 32)

Pete's father asks Gus to come with him to help out on the riverfront and Pete is devastated. He's the one who works around the house--not Gus, who would be rather reading Shakespeare and "who doesn't know which end of a shovel to hold." Why is he being left behind with the women and children?

Even though he's angry with his father and jealous that Gus was chosen to fight the flooding river, his practical knowledge of their home proves useful to his mother and two siblings. After he starts moving household items to higher ground his mother says:


"Your dad knew what he was doing, Pete, leaving you here to take care of things."

Was she right? Was that why Dad had taken Gus to the West End? Because he wanted Pete to take care of Mom and the kids and the house? Maybe Pete had been wrong about Dad. (p. 59)

As the rain continues to fall and street after street is flooded, his worries increase over not hearing from his father and Gus. Where are they and why hadn't they been in contact? As he evacuates the family to the second floor the reader feels the impending doom, "He almost felt the river lapping at his heels as he kept moving." (p.86). The ticking clock of the rising river parallels Pete's growing anguish and remorse over his misunderstandings with Gus. 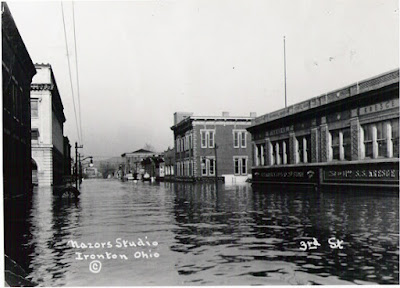 In the middle of the book, Kathy Wiechman switches over to Gus's point of view. In a manner in which I've never seen before, (and which she'll explain in my interview with her in next week's blog), Kathy begins Gus's POV from the time he leaves with his dad to work on the riverfront. It's a clever device that shows not only what some were doing to battle the rising river while others were trying to survive, as well as each brother's misconceptions and fears about the other.

At first Gus is thrilled to be chosen to do men's work. But after unending hours of filling sandbags, eating little, wearing soaking wet clothes, and blisters blooming on his hands, he feels like a chain-gang prisoner. He can't imagine that Pete really likes this kind of work. In fact, when he asks if his father shouldn't call home to tell his mother they're okay, his father replies,

"I don't have to worry about home," Dad said. "Pete's there. He can handle things as well as I can."

Gus had been easing down to the floor as Dad spoke, but he landed hard when the impact of Dad's words hit him. Dad hadn't left Pete at home because Gus would be a good worker, or because Dad wanted to do something with Gus. Dad needed Pete at home because Pete was the reliable one. The one who can handle things as well as I can. 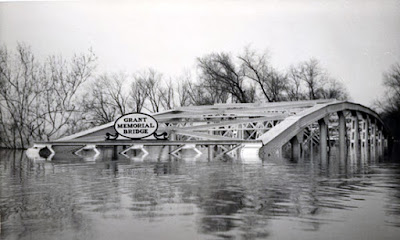 In a "love conquers all" moment, when the river continues to surge and the National Guard send the men home, Gus decides he must check on Venus, who lives on the other side of the river. The trip is perilous and Gus proves his mettle as he risks his life to help her family.  While stranded at her house, Gus spends a lot of time thinking about his family, realizing what is important, and wanting to make things right with Pete.

Maybe reading to David (Venus's younger brother) was a way to push the rising water to the back of his mind. But the back of his mind was already filled with shame for the way he'd treated Pete. And regret for failing to tell Mom where Dad was. The flood wasn't his fault, but so much else was.  (p. 198)


I've probably already given away too much of this fine story, but I'll just tell you this--the ending will bring sighs of relief and smiles to readers' faces.

This would be a great classroom resource for history, science, and English classes. I'll use it as an example of "man vs. nature" the next time I teach problems that characters encounter. (Here is my Plan a Problem worksheet.) Teachers could have great discussions about family misunderstandings and trying to see a situation from another family member's point of view.

Next week Kathy is going to talk about how her father's experiences in this flood inspired this book. This ARC giveaway will last two weeks. Leave me a comment today and I'll enter your name once. Leave a comment on both blog posts and you'll be in twice. Please leave me your email address if you are new to my blog. Winner will be drawn on August 17th.

Carol,thank you for featuring this book. My late father-in-law often reminisced about the Flood of '37. He and my mother-in-law married that year and moved from Kentucky to Ohio for a brief period. Ohio and Kentucky were both affected by this event. Please enter my name.
Blessings!
Connie
cps1950(at)gmail(dot)com

Connie, you would love this book! Kathy will be so pleased to read your comment and I'll start the giveaway with your name!

Oh my! I want to read this and would love to also share with my grands. Sign me up if I'm eligible.

Of course you are eligible, Joyce! Signed you up!

I have read both of Kathy's previously published books. I am anxiously awaiting this new book. My parents and in-laws also lived through this flood. Thank you for the great review and giveaway!

Thanks, Mimi. I'm happy to add your name but I need your email address!

Thanks, Carol, for this wonderful review. If the winner of the ARC is interested, I can send that person a signed bookplate to put inside the book.

Thanks, Kathy. that would be wonderful!

What a breathtaking review, Carol! I was holding my breath the whole time. Congratulations to Kathy!

I’ll be hosting Kathy for this book in September, so don’t add my name to the giveaway. Looking forward to the next installment with Kathy about NOT ON FIFTH STREET.

Thanks, Clara. Glad you liked the review. You'll love her book!

This was a great book review, Carol!

Thanks, Dorothy. I enjoyed writing it. Your name goes in the hat!

Sounds like Kathy has a real winner on her hands with this one. I really want to read it. I liked her first book very much. This one sounds even better. Thanks for the chance to win. I'm looking forward to the interview next week.

It is very good, Rosi. You and your grandkids would like it! You're in the drawing.

You're Gretchen. You'll love this book!

Wow! what a wonderful, interesting novel. I can't wait to read it- A great way for all of us to learn about historical events. Thanks for sharing Kathy's story.

Thanks for leaving a comment, Sheri. I think you'd enjoy this book!

If your review is half as exciting as the book, it is certainly a page turner. I couldn't stop reading what you wrote and definitely want to read the book.

Hat's off to you for another great review.

Thanks, Sandra. I'm hoping that reviewing books will teach me how to create a page turner too! Your name just went into the proverbial hat

This definitely sounds terrific. Thanks for another great review, Carol.

thanks, Linda. You're in!

Flooding tests everyone in its path. This sounds like a great story with characters who act like we would act setimes and how we wish we woul act in others. Thanks for sharing.

You'd love this book, Joan. Your name is in the hat.