Memphis, Martin, and the Mountaintop: A Review and Giveaway

Congratulations to Linda Phillips who won a copy of Back On Earth from last week's blog.

Alice Faye Duncan reached out to me through Twitter and asked if I was willing to review her two new picture books. Since I'm always interested in highlighting new books for you, of course I said yes! Here's the first one, MEMPHIS, MARTIN, AND THE MOUNTAINTOP: The Sanitation Strike of 1968, illustrated by R. Gregory Christie. (Boyds Mills Press, 2018) 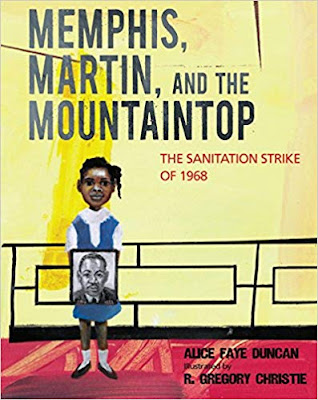 This historical fiction picture book aimed at upper elementary or middle school readers, is based on the life of Memphis teacher, Dr. Almella Starks Umola. Her father was a pastor, community organizer, and strategist for the sanitation strike. Dr. Umola walked with her parents during the protests and heard Dr. Martin Luther King, Jr. deliver his "I've Been to the Mountaintop" speech.

Here's a great interview with Ms. Duncan that includes the many revisions that went into this story told from the fictional character, nine-year-old, Lorraine Jackson's POV.

I remember the stinking sanitation strike.

Alley cats, rats, and dogs rummaged through the trash.

I also marched in '68 with red ribbons in my hair.

That is the stark opening to Memphis, Martin, and the Mountaintop. Lorraine relates that the garbage trucks were old, rusty, and not well maintained. On a rainy, bleak day in Memphis, two black sanitation workers--working for $1.70 an hour--were crushed when a packer blade malfunctioned.

It was a difficult winter for young Lorraine, her parents, and the other strikers' families. But everyone was encouraged when they heard Martin Luther King, Jr. was coming to Memphis.

Dr. King organized a protest march and Lorraine, her mother, and other mothers and children went to the back of the line, while the sanitation workers marched in the front. Unfortunately, fifteen minutes into the march it was interrupted by rioters. The police responded quickly with tear gas and by beating innocent people. Her mother said, "Sometimes bad people mess things up for good people doing good."

That night, Mayor Loeb declared a state of emergency. "From my bedroom window, I saw soldiers in big green tanks creep slowly up the street. I waved to my friend Jan who sat in her window too."

In April, Dr. King returned to Memphis but became sick and was unable to speak in person. His speech was broadcast to those who had gathered together at Mason Temple Church. "In the face of death threats, Dr. King spoke boldly. He encouraged Memphis strikers and strike supporters to march, boycott, and raise their voices for workers rights until victory was won."

That night, he was gunned down when a "bullet pierced the dreamer's neck." Afterwards, Lorraine Jackson wrote this poem and her mother hung it up on the crumbling walls of their rental home:

The King Is Dead

There lived a King.

He did not live in a castle.

He did not wear a crown.

He did not rule a royal court

Or ride in chariots.


The King marched in the streets.

He lived to help the poor.

He lived for peace and love.

The King is dead.

What will the people do?

The sanitation strike ended eight days later when President Lyndon B. Johnson sent in a labor official to negotiate a settlement. In the deal, the city recognized the labor union, the sanitation workers received 15 cents an hour more, and they were promised job promotions based on merit--not race.

That hopeful yet sobering thought helps conclude this informative picture book. Ms. Duncan, as a librarian for the last 25 years in the Memphis public schools, included a timeline and annotated source list at the back of the book. I recommend this book as a curriculum resource for grades 4-7. There is a lot to learn within these pages and R. Gregory Christie's illustrations amplify the text.

Having recently listened to Eyes on the Prize, Memphis, Martin and the Mountaintop helped me visualize this particular event on the civil rights timeline.

Ms. Duncan is giving away a personally autographed copy of this book to one fortunate winner. As she said in an email to me, "Readers deserve kindness and an extra 'oopmh'." Please leave me a comment by November 8 and your email address if you are new to my blog. If you share this post on social media and let me know what you did, I'll enter your name twice.

Wow! What a story! Can’t wait to read it
Jo Lynn

This looks fantastic! I would love to share this with my students.

Thanks Jo Lynn and Theresa. Your names start the list!

Carol, I think you know how much I love history and I lived through this period! Thanks for sharing and for the chance to win a copy. I have shared on FB, Twitter and Pinterest.
Blessings!
Connie
cps1950(at)gmail(dot)com

Wow! I'll recommend this one to my son's elementary school. It sounds fantastic! Thanks for featuring!

Thanks Connie (you're in twice) and Jillanne. Appreciate your support!

This is a story that definitely needs to be add to the classroom & library. Shared the post on Facebook. Thanks for the giveaway!
turtle6422(at)gmail(dot)com

YOu're in, Jana Leah. Thanks for sharing on FB too!

Thanks for sharing! I just found Alice on Twitter and started following.

Wow. This sounds like a wonderful book. I will definitely check it out. I wonder a book recently, so will step aside for the drawing. Thanks for the post.

You'll love this book, Dorothy! Thanks for commenting, Rosi.

Brilliant content. Awesome illustrations, too, Carol. And you found this great connection via Twitter! So impressed-:D. Thanks for sharing (No need to enter my name in the GA as I am a recent double winner on your blog)

Thanks for stopping by, JOan!

Carol, I'm so glad you featured this book! I had the pleasure of meeting Alice Faye at my first author panel ever-in Memphis, TN. She's as sweet as she is talented. She mentioned the book then and I couldn't wait to see the published copy(I have bought a couple for gifts). I didn't know about this story until she mentioned it and I love how she did a picture book of it. Such an important story that needed to be told.

Very cool that you met Alice Faye! Thanks for sharing, Kathleen.

Wow! Beautiful storytelling! And tough but important story. Would love to win this! Congratulations, Alice Faye!