Mothers of Massive Resistance: White Women and the Politics of White Supremacy: A Review and Audio Book Giveaway


Congratulations to Connie Saunders who won Memphis, Martin, and the Mountaintop from last week's blog. 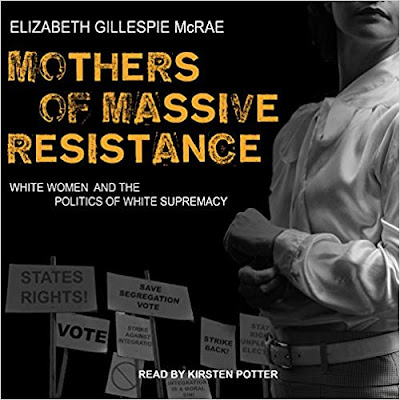 When I read the blurb about MOTHERS OF MASSIVE RESISTANCE: White Women and the Politics of White Supremacy (Oxford University Press, 2018) in the Tantor Audio catalogue, I thought it might provide a different perspective on the Jim Crow era. It definitely did.

Dr. Elizabeth Gillespie McRae's work is a comprehensive, well-researched treatise on the role white women played in the politics of Southern segregation from the 1920's-1970's. McRae focuses on four women who influenced multitudes of others through their writing and political activism:

Since I am unable to summarize twelve hours of listening, I will share some facts that resonated with me.

Here is an audio snippet narrated by Kristen Potter. Ms. Potter does an excellent job articulating the book and using a southern, genteel voice as appropriate.

I am giving away my copy of this audio book. Please leave me a comment by November 15. Share it on social media or become a new follower of my blog and tell me what you have done, and I'll enter your name twice.

Carol, this makes me think you should spend some time writing nonfiction, you are such a great researcher and documentarian.

I agree with Linda. This is a fabulous post!

Thanks Jilanne. You're in!

Apparently you took notes. And Linda makes a great point!You have the drive that writing non-fiction requires!

Sure, I took notes, Joyce! Walking along I'd stop and put notes in my phone. We'll see about non-fiction. I'd rather use facts as a platform into fiction. Even as I explore some genetics websites right now!

Wow. This sounds pretty amazing. I will have to check it out. I will step aside from the drawing. I won very recently and haven't had time to read that one yet.