The End of the World and Beyond by Avi: A Review and Audiobook Giveaway

Congratulations to Susan Rice who won One Red Sock on last week's blog. 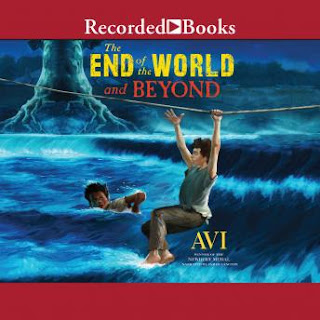 I'm a pretty big Avi fan, so when I found The End of the World and Beyond in the Recorded Books catalog, I knew it was a book I'd want to pass along. (I heard Avi speak at the SC Reading Association conference and still quote his thoughts on revision.)

This story of twelve-year-old Oliver Cromwell Pitts takes place in 1725. When the book opens, he is a prisoner on board an English ship taking him to the colonies. Instead of being hung for thievery, Oliver has been sold into slavery. The book is told in first person, uses the language of the times, and is aptly narrated by James Langton. Here is a brief link to the recording so you can get a taste of the book.

Before boarding the ship, "Goodwill," he and his beloved older sister, Charity, are separated. Finding her is Oliver's driving goal throughout the story.

While on board, Oliver is padlocked to six other prisoners. Their ordeal to survive with chains around their necks, is described in detail. At one point Oliver observes, “Truth is always held up as a shining ideal. ...truth can also be horrific." He develops new empathy for Negroes who are slaves for life. Although his future is dismal, he hopes he'll be able to be freed after his years of service.

The boat docks in Annapolis where the captain proceeds to sell the prisoners. As much as it is an anathema to him, he realizes he must sell himself or become the property of the city. Since he is young, he is passed over and feels shame over being sold for a lot less than the other felons. Locked up for a time because no one purchases him, he concludes that London jails and American jails are both awful: Misery has no geography, and he "remains a tethered bird in a locked cage."

Eventually, he his bought by a cruel master, Mr. Fitzhugh, an alcoholic tobacco planter. Oliver is released from jail and into an unknown, dreadful world. Even on the way to the tobacco farm, escape was always in his mind. "But fear overwhelmed me. My iron collar showed I was an enslaved felon." When he realizes that many people were attempting to running from their masters he observes that this doesn’t speak well of America.

Oliver's antagonist, Mr. Fitzhugh, is shown vividly through his dialogue and actions. He threatens Oliver, “You are my property... I only do what I want, when I want. If you try to stop me, I’ll kill you." Fitzhugh's ever-present loaded pistol and knife in his belt demonstrate how he is the epitome of being a malicious bully.

When Oliver gets to his master's house he feels as if he is at the end of the world. There he meets the other servant, a Negro teenager named Bara. Fitzhugh says to Oliver, "Consider yourself lucky. Bara will never get free."

Oliver observes that Bara "is self-contained. It was if most of what he had was within and he had little desire of letting anything out." Bara shows Oliver how to survive Fitzhugh's cruelty and advises him not to resist. "He becomes enraged at resistance. He wants you to fight back." He also suggests that the master will make someone helpless so that he becomes even more helpless as he believes the lies.

Oliver's discovers that his sister Charity is in Philadelphia and his desire to find her leads him to several reckless decisions. Bara is frustrated with him, but together they make a difficult and harrowing escape. When the two part, Oliver feels as if he is saying goodbye to his brother. In fact, Bara was the best friend and mentor Oliver needed. The book chronicles Oliver's physical and psychological maturation.

The ending will surprise you. But, take my word for it, this is a terrific book and classroom resource. It will open middle grade and young adult readers' eyes to slavery and indentured servitude before the Revolution.

Leave me a comment by August 15 and leave me your email address if you are new to my blog. Start following this blog or share it on social media and you will earn an extra chance to win.

I love AVI, and this book sounds wonderful. Thank you for the opportunity to win.

Yes to this author's work! Thanks for the chance to win a copy to listen to while I do chores/mow the lawn. dhammelef(at)yahoo(dot)com

Thanks Lisa and Danielle. You're in as well!

I love audios... This sounds like a moving listen. Thanks for the chance!

Thanks for the chance to win a copy. hvn101@hotmail.com

Remember Avi well from my library days. Thanks for a great giveaway.
Connie
cps1950(at)gmail(dot)com

Thanks Connie, Hvn101, and Linda T. You're all in the giveaway!

I don't know how I've missed Avi! Thanks for this introduction and a chance to win.

This one will be fun to listen to with my niece & nephew. Shared on FB.
turtle6422 at gmail dot com

I usually step aside for these drawings, but I can't resist trying for this one. Thanks for telling me about it. Fingers crossed!

Thanks, Jana Leah and Gail.

Eye-opening indeed, and I, too love Avi. Thanks for this review, Carol.

Thanks, LInda. You and your grands would like this!

I love Avi too and since I am working on a historical fiction novel, I will look this up to use as a mentor text. I assume that it is available in paper, not just as an audio-book.