The Player King: An Audio Book Review and Giveaway

Congratulations to Kathy Dykstra, an “old” friend who is new to my blog, for winning Four Seasons of Fun and to Connie Saunders for winning Lulu & Rocky in Milwaukee.

I was already an Avi fan when I had the privilege of hearing him speak at the South Carolina Reading Association. I’ll never forget his guessing game for his audience. He asked us how many times we thought he revised a novel. I don’t think anyone came close to the answer: 100 times!

His books demonstrate his driving desire to "get it right" results in well-crafted books for children which adults enjoy too.

(For my other reviews of Avi's books see The Book Without Words,  and Crispin at the End of the World.) 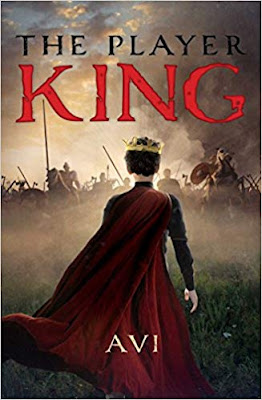 England, 1486. King Henry VII has recently snatched the English Crown and now sits on the throne, while young Prince Edward, who has a truer claim, has apparently disappeared. Meanwhile, a penniless kitchen boy named Lambert Simnel is slaving away at a tavern in Oxford—until a mysterious friar, Brother Simonds, buys Lambert from the tavern keeper and whisks him away in the dead of night. But this is nothing compared to the secret that the friar reveals: You, Lambert, are actually Prince Edward, the true King of England!

With the aid of the deceitful Earl of Lincoln, Brother Simonds sets out to teach the boy how to become the rightful English king. Lambert has everything to gain and nothing to lose, or so he thinks. Yet in this dangerous battle for the throne, Lambert is not prepared for what’s to come—or for what it really means to play at being a king. (Taken from Avi's synopsis of the book.)

********
"If you act like a king, you will be king." Brother Simonds drills this advice into Lambert every waking moment. This motto dictates how he must bathe, wear shoes, memorize his royal lineage, and act like nobility during during an audience with the Earl of Lincoln.

Although Lambert's belly is full for the first time in his life, he longs to return to his simple life as an enslaved kitchen boy--to hear once again that he is a "nobody." But when he runs back there, believing that Simonds must be mad to think he is the rightful king, he finds that no one recognizes him with his trimmed hair and elegant clothes.

The second time Lambert escapes the guarded house where he is being trained to assume his role, he sees a "player king," a man who acting the part of a king in a play in the marketplace. Lambert realizes that he has the unique opportunity which every boy in England dreams of--he could actually be the King of England.

Although he recognizes that Brother Simonds and the Earl of Lambert are using him for their own political gains, he begins to believe, "I am Edward. Earl of Warwick. I am the true king." But it is clear to the reader that he is a boy enjoying a grand adventure.

Lambert gets more than he bargains for. He mocks Simonds who leaves him and Lambert belatedly realizes that the priest was his only friend. With allusion to "The Emperor and His New Clothes" and My Fair Lady, Earl of Lincoln and his advisor, Lowell, condescend to calling Lambert their king. But as Lowell pointedly says, "It is always better when the storyteller believes his own tale."

Since Avi writes a lot of historical fiction, I assumed there was some historical foundation to this book. I was unprepared to read this on his website:

Read the histories of the time, and he [Lambert] is barely mentioned. Indeed, just last week I saw a documentary about Henry VII and Lambert was not even cited. But Lambert—a boy—was crowned King of England (in Dublin, Ireland) and led a large invasion army into England, only to be defeated at the Battle Of Trent, the last battle of the War of the Roses. I noticed Lambert in a footnote.

That’s what I have tried to write in The Player King.

Strictly speaking, the title should have been The Player Kings. There is more than one false king in the book.
The challenge was to write about something which is well known—except the central player, the player king—the boy known as Lambert Simnel.

The truth is, foot notes are the foot soldiers of history.

I'm able to give this book away courtesy of Recorded Books. John Keating does an excellent job as narrator. It will make a great middle grade curriculum resource; teachers could discuss English history and political maneuvering throughout the ages.

If you are interested in joining this giveaway, please leave me a comment (with your email address if you are new to my blog) by December 29th. Share this on social media or start following my blog and I'll enter your name twice.
at December 26, 2018

This was fascinating. I love Avi, and I love historical fiction. How interesting that he found this footnote and tried to fill it out. Is this a new Avi book?

Published in 2017, Caroline. Yes--I thought that bit about footnotes was amazing. Just had to quote him! You start the giveaway list, Caroline.

WOW, Avi!. Would love to add this to my collection. Such an interesting premise.

Thanks, Deb. It’s a great premise and book!

We are great fans of historical fiction around here.

Thanks, Carrie. You're in twice too--your kids will like this book.

That's really neat that you've meet Avi!! (Or at least see him in person and learn from him.) I loved his Crispin books when I was younger, and even named one of my first chickens Crispin. :) I didn't know he was still writing, but that's pretty neat! The premise behind The Player King sounds exciting!

I liked Crispin too. You would enjoy this book, Julian!

This one really pique's my interest. I'm reading an adult-oriented book, The Cruelty Men, about Ireland right now. Am fascinated to hear more about this young man. Thanks for letting me know about this. I'm off on vacation over the holidays, but had to stop by to put in my name for the drawing. Thanks!!!

And 100 revisions! Guess the novel I wrote during NaNoWriMo is the beginning of a long haul, LOL. But one I'm looking forward to! Cheers!

Wow, this sounds fascinating, especially since it was based on a mere footnote in history.

Thanks Gretchen and Jo Lynn for your comments. You both would enjoy this book.