Congratulations to Clara Gillow Clark for winning Hanukkah Hamster from last week's blog. Clara is a fellow writer and blogger with whom I often trade books!

********
In this post, I'm introducing a new format for some of my book reviews. I'm known to five of my six grandchildren as the grandma who loves books. (The sixth is only 3 months old. Give him time.) When I read this book I knew it would be a perfect read for my seven-year-old granddaughter, Libbie, who not only loves dogs, but has wanted to be a veterinarian since she could say the word. She agreed to read the book and give you her thoughts. So here you go, friends--a book review brought to you by Libbie and me! 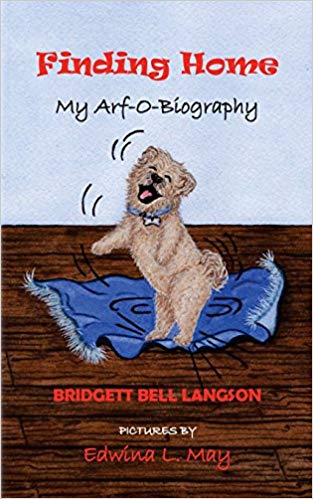 This sweet early chapter book is perfect for the 1-2nd grade reader who is starting to read on her own. This is Bridgett Langson's debut book and her love for all things four-legged and fuzzy comes through loud and clear.

Like Christie Miller's book, Raccoon Rescue, FINDING HOME is written for young readers from the point-of-view of the animal character, involves a rescue, and is self-published.

"Puppy" as his new family calls him until they decide on his name, wants one thing: a boy of his own. He and his "Sis" were abandoned by their parents (Marf and Darf) in an attempt to protect them from a mean man they called Bad Boots. Puppy is thrilled when his boy, Eric, wants to keep him. But Puppy's problems aren't over. He arfs too much and doesn't always go potty in the right place. Even though he does his best to look cute and adorable,


Eric's father dislikes his yapping and is not convinced he wants to add another dog to the household.

Puppy's "dialogue" with Moka, the big scary dog who belongs to Eric's brother John, as well as his own thoughts are interspersed throughout the story. During a visit to Sis she tries to convince him to stay with her. He says,


I love visiting you, but I need to go back to my own home. Darf was right. It's the way of dogs to live with their own humans. (p.88)

At another time Puppy thinks,


Puppy has a keen sense of smell, and can smell when a person is scared. This sense of smell saves the day when Puppy finds Eric's father lost work notebook.

This is the last illustration in the book. I'll give you one guess how the book ends! 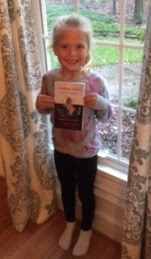 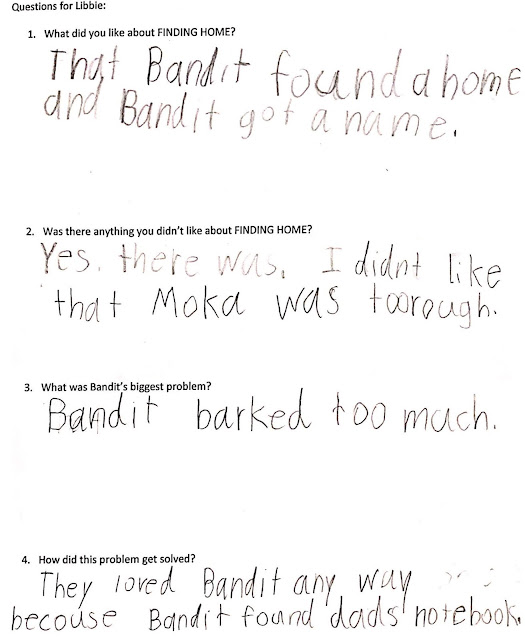 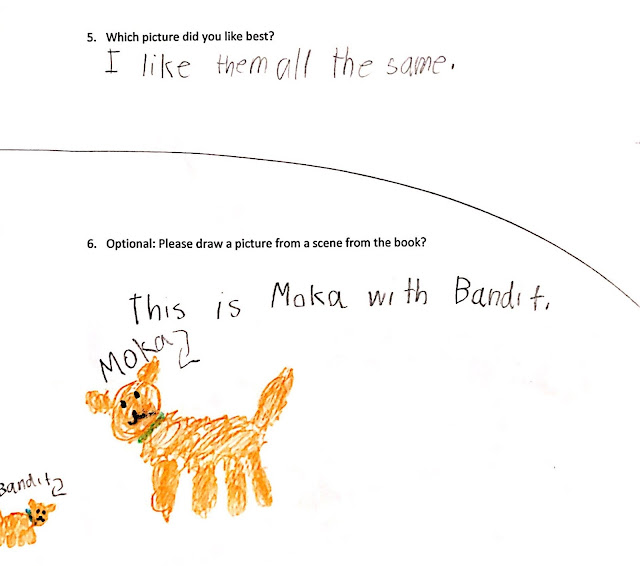 Please leave me a comment by December 6 and I'll enter your name in the giveaway. Bridgett will be happy to provide an autographed copy for one fortunate winner. This will make a great holiday present for a young reader. Don't forget to leave me your email address if you are new to my blog.

I always enjoy reading your thoughts but Libbie's review is the perfect touch! I loved learning aboiut Finding Home and I appreciate the chance to win it.
Connie
cps1950(at)gmail(dot)com

Love that you did a review with Libbie! Sounds like a cute story and I loved the illustrations shown.

Thanks Carrie, Connie, and JoLynn. Your names are in the hat!

Awwwww. I love hearing from new readers. What a great review. Thanks for the post. I will pass on the drawing. I am buried in books.

I love the grandmother-granddaughter duo review! Libbie’s illustrations were a delightful bonus, too. It’s great to hear what young readers think of the books they’re reading. Brilliant, Carol!

An adorable review by Libbie and a dog book giveaway in time for Christmas. How can you beat that? Please enter me in this one. Thanks! Merry Christmas, Carol!

Thanks Linda and Clara. You're both in!

Dear Carol and Libbie,
Thank you for your review of "Finding Home." So clever. It's fun to see a habit going from generation to generation!

Glad you liked it, Joan! I hope I pass along my love for books and the Lord to my grands!

Dear Carol,
I know for a fact that you do pass along your love for books and for the Lord to your grandchildren and to everyone that you meet!