Run to the Light: A Review and Giveaway


********
My blog readers know that I generally read and review books for children and teens. Every once in awhile I come across a book for adults that I want to share with you. Run to the Light (Bedazzled Ink, 2018) by Laura King Edwards is one of those.

But first a disclaimer: Laura Kings Edwards' book about her sister Taylor's battle against Batten Disease is not an easy book to read. Batten, a rare inherited neurological condition that causes vision loss, progressive cognitive and motor decline, and seizures, usually strikes children between the ages of 5-10 and is always fatal. Laura does not hold back on describing her fear, anger, depression, and anguish during the twelve years that Taylor bravely fought the Batten monster. But she also eloquently shares the joy she experienced in the moments she shared with her brave little sister.

If you've been reading my blog long enough, you will recognize this story. Laura gave me the privilege of hosting her cover reveal on my blog last March. Now, you'll hear about the story. Read it, and be inspired.

In 2006 Taylor was not quite eight when her family realized that her vision and school problems signified something far worse than any of them imagined--they were Taylor's first symptoms of Batten Disease. In evocative detail, Laura shows the reader the disease's progression, how it impacted Taylor and her family, Laura's journey to find acceptance, and most of all--how Taylor became a symbol of courage to her Charlotte, NC community and to the Batten world at large.

Throughout the progression of the disease Taylor never asked, "Why me?" "Even as her body started failing her, she sought a normal life and never asked for extra help or attention." (p. 26) Taylor's resilience amazed Laura more than anything else.

Although there were the common stages of denial and numbness that we all experience when we receive shocking news, the King family--particularly Laura and her mother Sharon, turned their anger towards fighting the disease. Several months after the diagnosis, Sharon invited a small group of women to come for lunch. Laura listened as Sharon "declared war on Batten disease and urged the rest of us to join her on the battlefield."

"The doctors said there's nothing we can do," she said. "But I'm not going down without a fight." Her voice cracked as she described our opponent, ticking off the symptoms that had crept into my sister's life and the awful ones yet to come. But her resolved never wavered. "Nothing about this will be easy. There's little being done for Batten disease. There aren't many kids like Taylor. But we have to start somewhere. Someone has to take a stand."
.......
In that moment, Taylor's Tale was born. (p. 29)

Sharon's decision to fight Batten led to taking Taylor cross-country to participate in a clinical trail to receive purified neural stem cells at Oregon Health and Science University in Portland. It led to raising thousands of dollars for research, attending umpteen Batten disease conferences, and learning the foreign language of medicine and science. It even led to a new North Carolina law that established the first rare disease advisory council in the country.

At the same time, Laura joined the battle by educating others by blogging, attending conferences, meeting leading scientists in the field, and working hard to raise money for research. Laura's personal journey intermingles with her running career which became a metaphor for her own fight. She was afraid to give up, thinking that Batten would win. "All my life I'd been running; I wasn't about to lose this race." (p. 54)

Two years later Taylor inspired Laura by running a 5K-- the only blind person in the race. Taylor ran tethered to her running buddy by a bungee cord.

Whereas I'd often felt only anger toward Batten disease, my sister had beaten her demons by ignoring them--by focusing not on what she'd lost, but on what she could still do. She didn't waste her time worrying about what Batten disease had taken from her. She paid it no mind, and she ran her race.

Before the trees bloomed in the spring, I'd started running for her. ( 101)

Although Laura began running for something greater than herself, the specter of not crafting the perfect blog post or not answering an email to Taylor's Tale on time haunted her. Would she hurt her sister's chance of survival? As she moved from being a sprinter into a long-distance runner, Laura realized,

I'd come to understand the value of a long-term plan. I'd learned how to push my body past the limits of what I'd previously believed it could achieve.

It took me a long time to learn that Batten disease is more like a marathon [than a sprint]. You start off strong, with lots of energy. You have runner's highs and lows. Some days you think you could run forever. But then some days you feel like when you cross the finish line, you'll be so glad to see it--so exhausted--you'll just be happy it's over. Some families, families whose kids have died, have told me in the end that it's like that. It's so bad, so freaking ugly, they can't face it anymore. It isn't even about making happy memories at that point. it's about their kid's dignity and their own survival, and about finding peace. (p.209)

The last race that Laura describes in the book is the one she ran blind--just like Taylor did. She trained for five months and used the same bungee cord that Taylor had used several years prior. She was cheered on by other runners, the media, and her family.


I'd run 13.1 miles in the dark But I didn't take a single step alone. As I ran the final stretch of Thunder Road, led by the voice of a friend and the courage of a dying girl, I understood: Batten disease may have cast a dark shadow on our world, but I wasn't running away any longer.

I was running to the light. 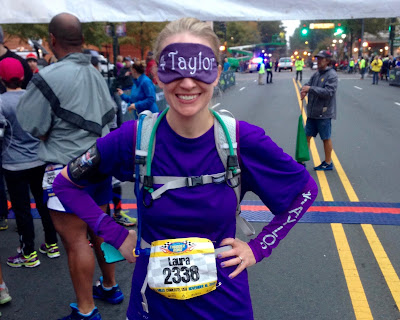 
Also, Linda Phillips most recent YA novel in verse, Behind These Hands, is a story of a young girl struggling with the fact that her two siblings are diagnosed with Batten. It is based loosely on a family in Charlotte.

This giveaway began in March with Laura's cover reveal. Add your name to that list by January 3 and you'll be in the drawing also. This time you have an extra chance to win since both Laura and I are giving away a copy. Please leave me your email address if you are new to my blog.

Thanks for reviewing Laura's wonderful and inspiring memoir. If you don't know what Laura and her family have done to fight the ugly rare disease, Batten, you need to read this book. I'm privileged to have known Taylor and to have swapped beta reading with Laura! Thanks for the mention, Carol.

Thanks, Linda, for opening my eyes to this disease.

I was intrigued when I first heard Taylor's story and I applaud her family's efforts to make others aware. Thanks for sharing!
Connie
cps1950(at)gmail(dot)com

I'd never heard of this insidious disease until I read this post. It does sound like a hard read at times - but also an inspirational one.

Thank you LInda, for sharing this post. I'll put your name in twice.

Thanks, Connie. You're in twice since you commented on her cover.

We have a Battens Child in our family. Infantile onset and she is now eleven. Prayers for Olivia is her Facebook page. Olivia Grace Lewis our angel on earth. Diagnosed at four but it took a year for diagnosis. A slow death of a child is the most horrible ordeal for a parent. But God knew Olivia needed a special family and she has one. Livvy used to laugh, walk, eat and see before but no more. She’s fed thru a tube and we believe she can hear us! She has made us all better people. Thanks to Linda for bringing Battens into the public eye.

Thanks Debbie, for sharing your family's personal anguish. Yes, both Linda and Laura have done us all a service by writing these books.