Congratulations to Jolene Guiterrez who won Maiden of Iron from last week's blog.

The Teachers March! (Boyds Mills & Kane, 2020) is a nonfiction picture book that many of you will be interested in adding to your home or school library. This is the story of Reverend F.D. Reese's activism and how it led to obtaining equal rights for African Americans. Set in 1965 in Selma, Alabama, co-authors, Sandra Neil Wallace and Rich Wallace use storytelling techniques to bring history alive.

The first line hooked me right away.

Reverend Reese loved teaching science, but he was passionate about teaching his students that under the Constitution, they had the same rights as whites.

He led marchers to the courthouse to register to vote but was met by Sheriff  Clark who swung his billy club and threatened harm to the Negroes. Reverend Reese knew that even if they registered, they would be forced to take a voting test that Whites didn't have to take--and that was impossible to pass.
Reverend Reese thought about how the Black teachers were respected in their community. They were the somebody somebodies. College educated. Shiny leather shoes. Suits and Sunday brooches seven days a week. No group like that had marched for freedom before.
(Side note: When I interviewed people for Half-Truths this was the attitude that was expressed toward the Second Ward High School teachers. They were respected and loved.)
But how would he convince the teachers to march? They were frightened. Reverend Reese needed a "glorious opportunity" and a "triumphant idea."
He discovered he had both. After hearing Dr. Martin Luther King talk on television, he decided to write to him and ask for help with the teachers.
The night that Dr. King spoke at Brown Chapel, seven hundred people packed the auditorium. Two people from the community came also, 15-year-old Joyce Parrish, and her mother "Too Sweet." 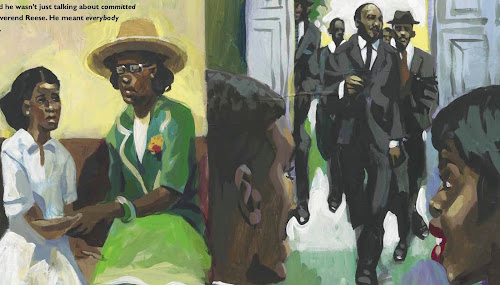 Despite their fears of going to jail or losing their jobs, one by one, over a hundred teachers agreed to march for the cause: they were leaders of the community and they would come forward and demonstrate their commitment to gaining the right to vote.
As a teacher, Too Sweet had a difficult choice to make. She was a single parent. Who would take care of Joyce if she went to jail? More than a hundred teachers pledged to march, and Too Sweet was one of them.
On the morning of January 22, 1965, the teachers who had said they would march packed a peanut butter sandwich and a toothbrush. They would need them if they were arrested. Reverend Reese was worried. He'd seen other individuals arrested as they tried to register. Would the teachers show up for the march?
They did! 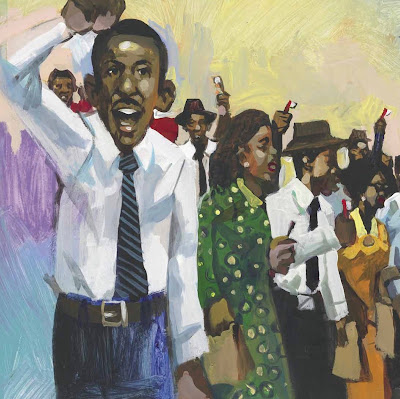 When they arrived at the courthouse, they were greeted by the same sheriffs who had angrily confronted Reverend Reese before.
But this time, the sheriff and his deputies faced a huge crowd of teachers. If they all got arrested, who would teach the students? The superintendent would have to close the schools. The sheriff knew that and had to put away his billy club. 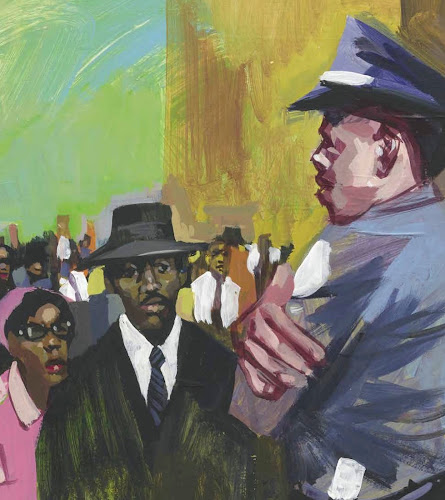 Reverend Reese and his triumphant idea had gained a glorious victory.
Afterward, Joyce was relieved when she found her mother amidst the group of marchers. She and her mother hugged; Dr. King came back and praised the teachers.
Because the teachers marched, other groups marched also. Beauticians and barbers. Undertakers. Even the students.

Many of the Selma marchers were arrested and the nation took notice. They wondered why respectable citizens in suits and dresses, and school kids carrying books, were jailed.
In the summer of 1965, the Voting Rights Act passed. In August, Reverend Reese, Too Sweet, and other teachers climbed the steps to the courthouse. There were no voting tests or bully clubs. 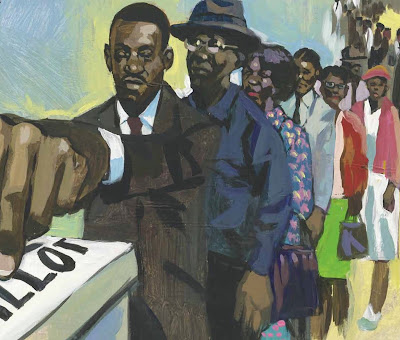 And the first thing they did, was vote Sheriff Clark out of office.

The back pages of the book are filled with information. The authors, Sandra Neil Wallace and Rich Wallace discuss their interviews with Reverend Reese, Joyce Parrish O' Neal, and Lawrence Huggins, another teacher mentioned in the book. In addition, the illustrator, Charly Palmer, discusses his use of photographs to create his unique illustrations. A detailed timeline and bibliography make this an excellent curriculum resource for students in 2nd-5th grades.

Leave me your name and email address (or email me privately) by September 11 to enter the giveaway. For an extra chance to win, share this post on social media and let me know what you do.

Since I am also working on a book related to civil rights, I was very interested in how the Wallaces became interested in this story. Because I'm running a series on writing collaboratively (check out the first post here) I asked them about that too. Look for their responses to these questions on a bonus blog post on Saturday. (And a second chance to win The Teachers March!)
at September 09, 2020

I would love to read this book--this is a new topic to me and nonfiction picture books are my favorite to read and write. I shared on tumblr: https://yesreaderwriterpoetmusician.tumblr.com/post/628802829776306176/the-teachers-march-a-picture-book-review dhammelef(at)yahoo(dot)com

Thanks for sharing on TUmblr, Danielle. Happy to start the list with your 2 entries--I knew you would want this book!

Dear Carol,
It is great when people stand up for one another's rights.
Thanks for sharing THE TEACHERS MARCH.

Oh this is a definite one to give to my nephew.
turtle6422 at gmail dot com

Thanks Joan, Jolene, and Jana Leah. I appreciate your comments and any of you would love this book. Jolene, you're in twice.

Awesome book! I'd love to win it!

Now you're in twice, Joyce!

What a fascinating event. I’ve never heard of the Teacher’s match before. I’d love to read this book and learn more about it. Thanks for sharing about this book!

Thanks, Kesha. I’m sure you would love this book ok!