The text and illustrations for Saving Granddaddy's Stories  (Reycraft Books, 2020) complement one another beautifully and I'm excited to share both with you. This is author, Shanon Hitchcock's debut picture book. (You will find my review of one of her novels, The Ballad of Jessie Pearl, here.) She wrote about Ray Hicks because she grew up in the foothills of the Blue Ridge Mountains near where Ray lived. And like Ray, her family loved to tell stories too. As you read the book, you can almost hear Ray's voice spinning off the pages.

Look closely at the illustrations by Sophie Page. She is a mixed-media artist and creates images in two dimensions to tell her stories. These illustrations were made from paper, fabric, wire, and a "handful of Jack's magic beans."

Ray Hicks was a poor boy who grew up among the "shimmering peaks and coves of the Blue Ridge Mountains." 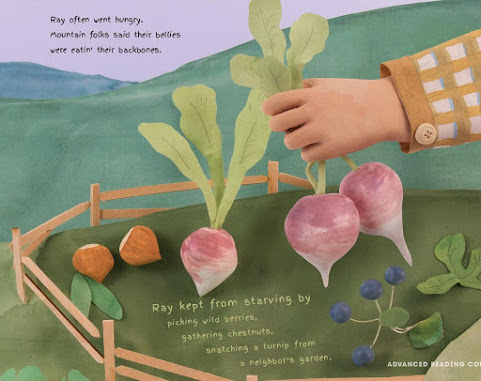 Ray spent a lot of time listening to his Granddaddy Ben's Jack-tales. 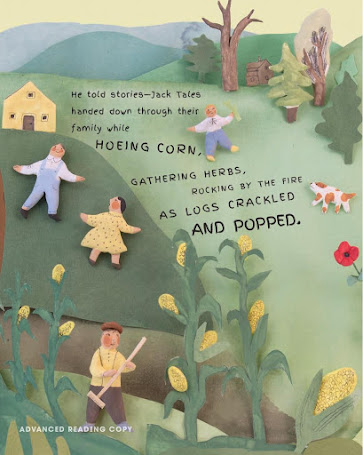 All of the stories were about a poor boy named Jack who worked hard but "traded his cow for a magic bean, because he was starving." 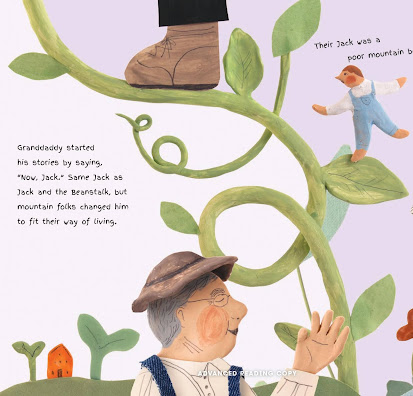 At school when his teacher read Jack and the Beanstalk, Ray asked to tell it the mountain way. "Ray imitated Granddaddy and spread his arms wide." 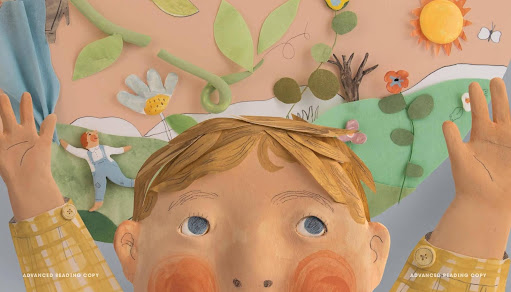 Ray grew up and started telling Jack tales, just like his Granddaddy. 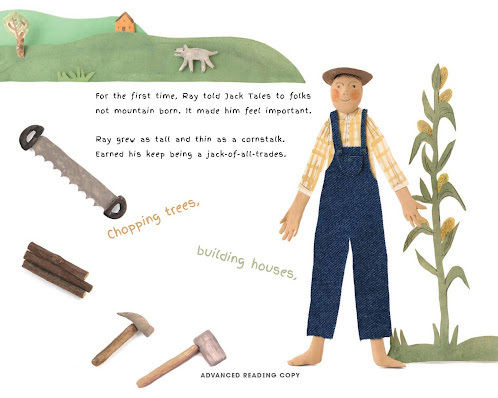 Morning and night, Ray told stories to anyone who would listen.
Then he heard about the International Storytelling Festival in Jonesborough, Tn. 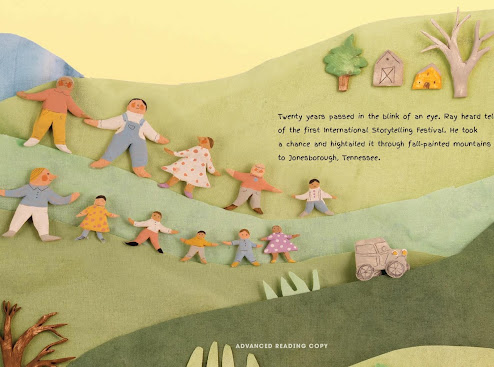 The people in Jonesborough had never heard a man like him. He was,
"A teller who'd lived his stories--gone cold and hungry."
After ten years, he won the grand prize for storytelling, traveled to Washington, D.C., and met the vice president, "a fellow named Bush." Ray was recognized by the Smithsonian by receiving a National Heritage Award. 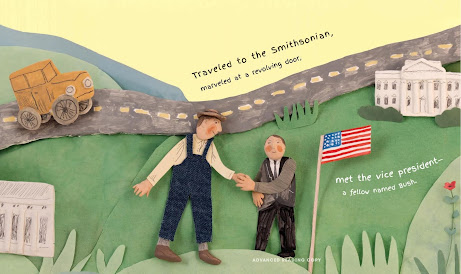 Granddaddy's stories lived on. Ray returned to his beloved mountains, to the same home he was born in. "And he never turned away anyone who wanted to hear a story." 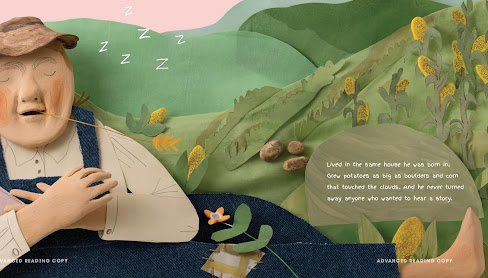 I have my ARC to give to one of you. I'm going to change the giveaway this time, so listen up! IF you live in North Carolina, tell me that in the comments and I'll put your name in twice. To entice my non-North Carolina friends into wanting to visit my beautiful state, leave me a comment and I'll enter your name THREE times. MAKE SURE you leave your full name and email address. Lately, someone named Victoria has been commenting but I have no idea who she is so I can't include her. Also, a lot of comments are showing up as "Unknown;" although people with Google accounts seem to be getting through OK. To be safe, leave your name and contact information.

Why not have your child create his or her own mixed media project? Pinterest is loaded with ideas. Or, just create a picture out of craft materials in your house. My granddaughter and I spent a fun hour together and made these: 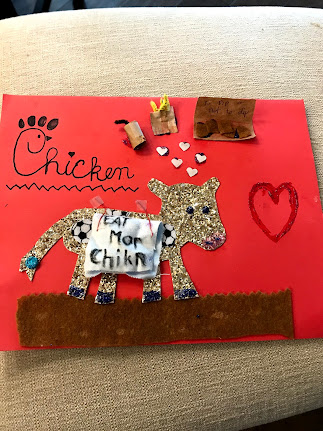 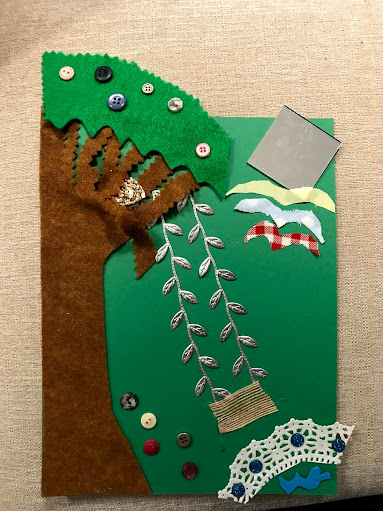 Would love to get this book. I think I've heard of Ray Hicks but not sure. And I live in North Carolina!

Adorable and I loved it!
Hewi Mason

I live in Georgia, but I love the mountains. My happiest place as a kid was my grandparents' house in Sautee-Nacoochee in the Blue Ridge Mountains. NC is a gorgeous state. Like GA and VA it has cities, mountains and beaches, plus lots of countryside that isn't developed yet. Thanks for sharing the book, and the beautiful art techniques!

I don't live in NC, but my sister does and my daughter lives SC (does that count). But I am a family storyteller as well as o e who apreciates family stories from the many regions of the US.
Antoineet Truglio Martin
Storiesserved@gmail.com

Carol, thank you for introducing this new author to me, Shannon Hitchcock. I'm going to check out her other books, too.
I love Sophie Page's art. Mix media is so fun and it's inspiring to see what others can make out of simple products.
As you know, I'm in Missouri so I'd love to visit N.C. again someday. It would be fun to meet you in person and see our friend, Cat Michael's.
Thanks again for your awesome post today, Carol.
~Rosie

Happy to hear from NC friends and those out is state too. Entering all your names. Antoinette, thanks for leaving your contact info. Now at least I know who you are!

Thank you for sharing! This looks wonderful. I hope to visit NC soon as a possible someday retirement home. I shared on Pinterest
https://www.pinterest.com/pin/570620215293168643/

Thanks, Danielle. Your name goes in 3x since you are out of state--and it's a great state to retire in!

I don’t live in Georgia but definitely want to visit!
Think my twins would love this book!
Zachary Snyder zacharysnyder@gmail.com

I can't wait to read Shannon's new picturebook. I have read and loved all her other books. The artwork on this is charming. I have visited North Carolina three times. Does that get me an extra chance? ;-)

Thanks for leaving a comment and your email address, Zachary. I hope you come back and visit my blog again--I share a lot of picture books here!

Congratulations to Shannon and thank you, Carol, for sharing Shannon's first picture book with your readers. The illustrations and text capture rural living reminiscient of days gone by. We are hoping to visit North Carolina from here in rural PA some time this year to visit a friend who recently moved there. I've been MIA on social media but looking forward to jumping back in. This is a start! claragillowclark(at)gmail(dot)com.

Baltimore Girl here now living (for 36 years) in North Carolina. Love this art! Fascinating to see how the artist turned all sorts of items into illustrations.

Barbara, I knew you would love the art and the book. Clara, I'm honored that you're getting back into social media by visiting my blog. THanks to you both, and you are both entered!

You're in Joyce. I knew you would love it!

Love this, Carol. We've lived in North Carolina twice, but now we're transplanted to Pennsylvania. My dad was a storyteller, but just to our family. Today is his 114th birthday and we've been reading and telling his stories, and remembering him. Thanks for sharing this book.

Thanks, Lois. What a way to celebrate your father's life! SInce you're no longer in NC, I'll put your name in 3x!

I have you done for 3x Rosi!

I live in North Carolina. This reminds me of the treasure trove of stories from our family members. We should all ask questions and listen more carefully to their memories and record them. Lovely review of the book.

I Agree, Debbie! Ask questions and savor our elder's stories. You're in 2x.

Hi Carol, I may be too late for the drawing but I absolutely loved seeing this book. Definitely one to get for special times with my granddaughter. I've actually been blessed to visit Billy Graham's homeplace and library in Charlotte, NC and we hope to go back soon to see more of this beautiful state!
Blessings!
Connie
cps1950(at)gmail(dot)com

NOt too late for the drawing, Connie--your name goes in the hat 3X-- as well as Carrie's!

Dear Carol,
Such a clever book. Don't enter me in the drawing!
Enjoy being you.
You are amazing!

Never Give Up'
Joan

My niece and nephew would love this! Isaac Snyder aryehsnyder@gmail.com

Thanks for stopping by Issac. I'll assume you're not from NC so will enter your name three times. If you don't win, please come back next week for another great giveaway!

And thanks, Joan, for leaving a comment but saving the book for someone else!