BUZZING WITH QUESTIONS: The Inquisitive Mind of Charles Henry Turner- A Picture Book Review and Giveaway

I received a record number of comments on last week's blog. Congratulations to Danielle Hammelef for winning GRANDDADDY'S STORIES. 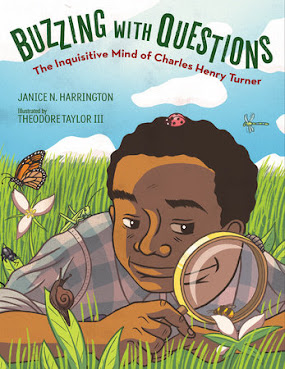 At the moment I am studying picture book biographies, with the hope of writing one or two myself. That means you will meet some notable dreamers, scientists, and artists through the words of talented authors and illustrators. Buzzing with Questions (Calkins Creek, 2019) written by poet, author, and creative writing instructor, Janice Harrington, is the story of Charles Henry Turner, a 19th-century scientist. Vivid, joyful illustrations by Theodore Taylor III bring Charles' quest for understanding the natural world accessible to young readers.

Without a doubt, Charles was a boy with questions. 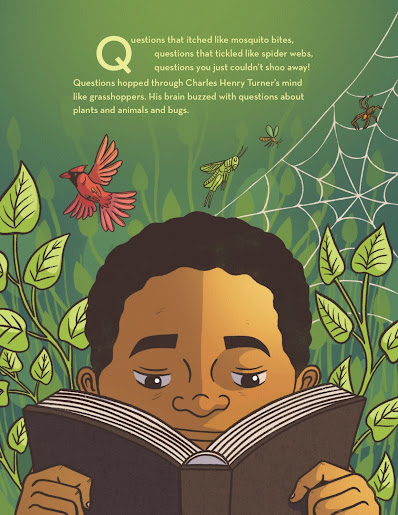 His teacher encouraged him to search for his answers. And that's exactly what he did. After finishing high school, Charles Henry Turner did what very few African Americans did in 1886 -- he went to college.

He was the only brown-skinned man in the class and his white professor was worried about how he would be received. But the other students enjoyed the company of their fellow hard-working student. 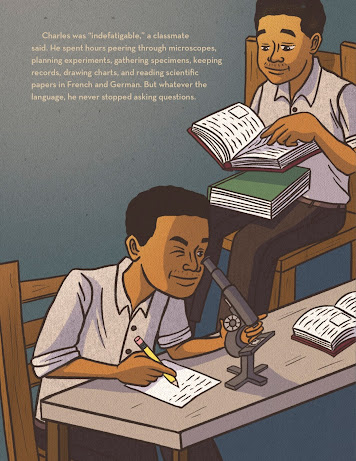 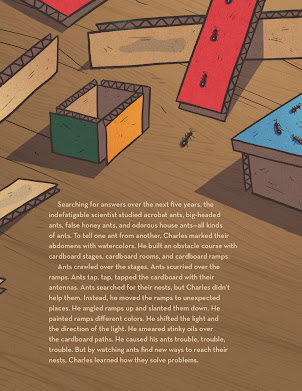 Searching for answers led to devising experiments. Which led to more information and more discoveries.
Along with his high school students, Charles investigated bee behavior. First, they fed them at breakfast, lunch, and dinner. When they only set out jam at breakfast, the bees still buzzed and circled at other meal times. From that, they deduced that bees had a sense of time.
Bees, giant water bugs, whirligig beetles, dragonfly nymphs, water striders, paper wasps, hornets, or tent caterpillars. Charles studied them all.
....
His mazes, spider jars, paper circles, and cardboard stages toppled old ideas about insects. He never stopped inventing new ways to study the smallest creatures, searching for new ideas, or asking new questions.
Despite facing racial prejudice, Charles became an integral part of his St. Louis community. He hoped that by studying biology, people could see the connections between all living things. 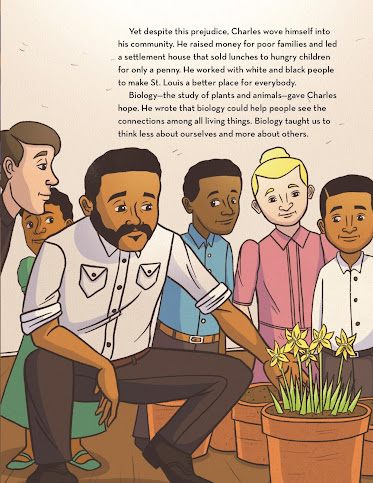 Charles Henry Turner, the boy whose teacher urged him "to go and find out," grew into a teacher himself, a devoted scholar who taught students to look closely, to find the webs that connect us all, and--just as he did--to fill the world with questions, questions, questions.

Resources at the back of the book include why Ms. Harrrington wrote this book, a timeline, and other resources.  It is a great curriculum resource for Kindergarten-third grade classrooms and STEM book.
For a Buzzing with Questions read aloud, watch this:

For another great video about Charles Turner's experiments, watch this:

Please leave a comment along with your email address by 6 PM on February 6. It's a great addition to your classroom or home library.
at February 03, 2021

This looks like a great addition to our library.

Really love this! Besides being a great book about a scientist, it is also a great way to introduce research skills in a library class setting. Would love to win it for my school library.

Thanks Carrie and Gwen. Your names start the list!

mazing! Who would have thought to approach studying insects in such a fashion? I'm impressed with Charles Henry Turner's thought process! Great book!

I am also studying picture book biographies in the hopes of writing one myself. I have several on hold now at my library, including The Oldest Student which has been recommended to me. This one will be a joy to read and study. Thank you for the chance!

Oooh, I love picture book biographies and this is one I don't have in my school library. I think Charles Henry Turner will be an inspiration to my students! Thanks so much for sharing, Carol.

Happy to include your name, JOlene!

This book will make a great gift for my nephew. Thanks for the giveaway!
turtle6422 at gmail dot com

Anything science will intrugue my granddaughter.

This looks like a really beautiful book on a fascinating subject. Thanks for the chance to win a copy.

Carol, I do have a little grandson who would Love this book!! ❤️

Charles was a fascinating man! I'd love to read more about him and share this book with my grandchildren. And I love the title since my childhood nickname is Buzz.

Buzzing with Questions is intriguing with the great title and book cover to pull readers in and not let them go when they see there's even more wonder inside.

Thanks for sharing it with us, Carol.

Thanks, Joan. I assume you want to be in the giveaway?

Amazing guy! I love discovering hidden history and historical figures like Charles Henry Turner! I'm amazed at the integration depicted in this story.

Thanks for this great review, Carol. My inquisitive, science-loving grandson would love it!

Yes, he would, Linda!