The other day I received a stack of books from Sleeping Bear Press which included several nonfiction titles.

In honor of Black History month, I chose Stompin' at the Savoy: How Chick Webb Became the King of Drums by Moira Rose Donohue as the first one to read and giveaway. 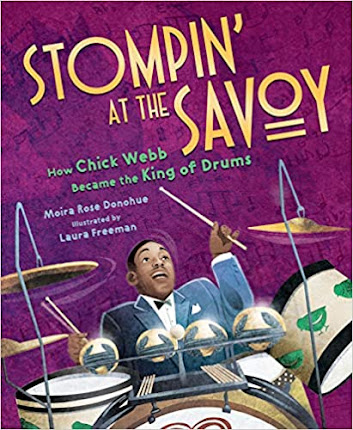 As I write two nonfiction picture books, I am participating in a superb online "crash course" in writing nonfiction, NF Fest. Each day a different author posts information and an activity related to writing nonfiction. Today, I was inspired by Candace Fleming's challenge, "Let's Make a Scene" to look at the scenes and summaries in a nonfiction text. She defines scenes as "a specific time, a specific place, and one change." Summaries,

tell the reader something necessary without creating a full scene. You can use summary to transition between scenes, set the tone or mood for the next scene, leap forward in time, or explain something (context) your readers will need to understand the next scene. We can identify it by its lack of time and place.

This blog will be my analysis of some of the scenes and summaries in Stompin' at the Savoy.

The book opens with a scene of William Henry "Chick" Webb tapping rhythms on iron railings and marble steps. The author and illustrator foreshadow the changes that will occur in Chick's life. 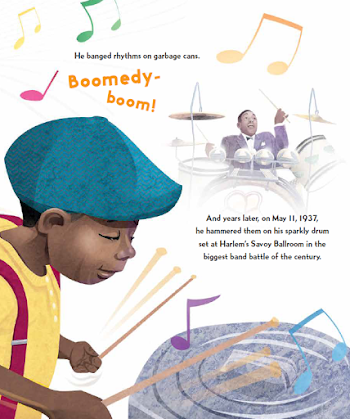 The reader turns the page and on the left side finds a summary of William's early childhood illness that affected his spine. On the right is the dramatic illustration of this scene: 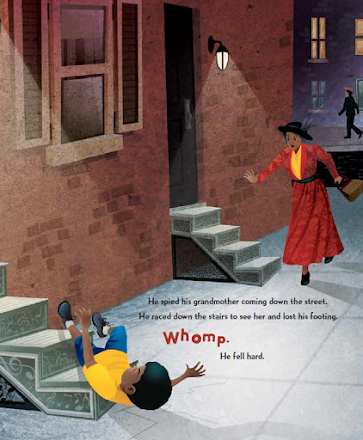 After the fall and an operation, the doctor wanted him to get a set of drums to strengthen his arms (summary). In the next two-page scene William is in the kitchen with his mother pounding on "pots and pats, floorboards and washboards" (notice the wonderful alliteration and internal rhyme!) because the family couldn't afford drums or drumsticks. William made his own drumsticks!

The following page is a summary illustrated here. There's no time or place, but rather an explanation of how William became known as Chick. 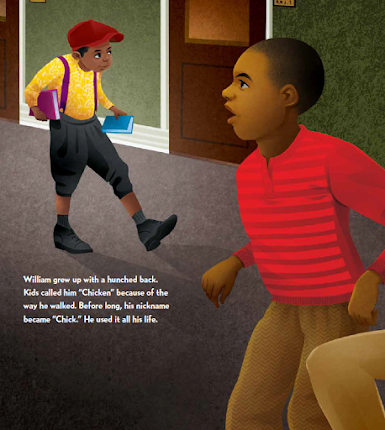 Next, the reader sees a scene in which Chick is making money by selling newspapers and twirling his real drumsticks in the air. The change is that he has saved up money to buy the drumsticks and is attracting attention, and spare change, with his tricks.

The next scene shows how although Chick stopped growing at four feet, one inch, he saved enough money to buy a drum set. 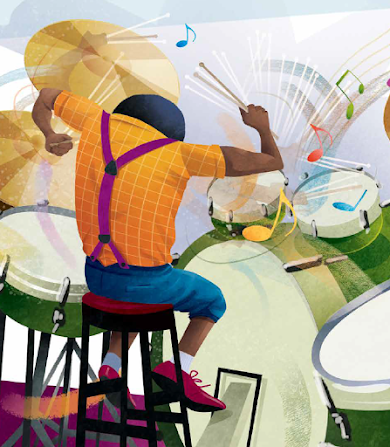 The reader then learns through the following scenes how jazz bands were "jamming all over the country" and Chick was hired to play with other bands.  Finally, Chick started his own swing band and hired Ella Fitzgerald as his lead singer.

The next scene shows the dancers at the Savoy ballroom where Chick's band was hired to play. 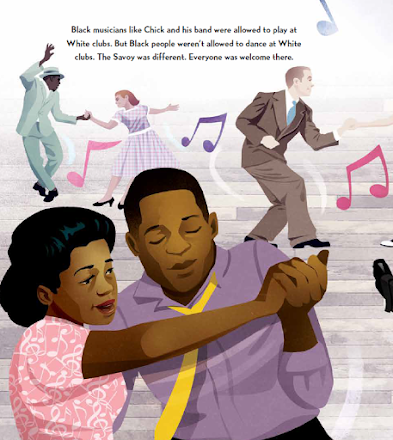 At that time, band competitions were the rage. There's a scene where Chick loses to Duke Ellington. Disappointed but undeterred, Chick challenges Benny Goodman, the "King of Swing" to a battle of the bands.

Several pages depict both summary and scenes at the Savoy the big contest night.

The climax of the competition is depicted in this scene in which Benny Goodman's drummer bows to the new "King of Drums." 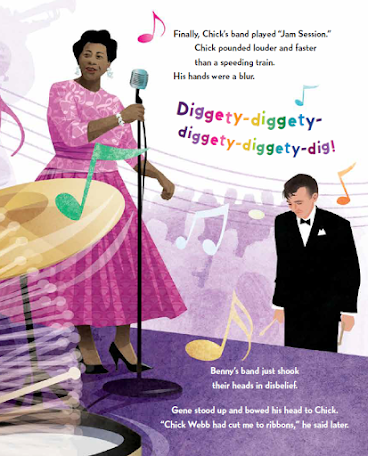 Have you considered scenes and summaries in the book you are writing or reading? This exercise was helpful to me as I go forward in writing picture books, but it is also helpful for all genres of writing. I previously blogged about scene elements here and here.

I loved Laura Freeman's artwork that swirls through the pages.  She captures the music's movement through art--which to me, seems like an incredible feat.
Stompin' at the Savoy is a great classroom resource to teach K-2nd graders about African American history, music, and perseverance. The one page of back matter expands the reader's knowledge of the challenges which Chick faced as well as information about swing music. In the touching last paragraph, the author shares why she was drawn to Chick's story.

Leave me a comment by 6 PM on February 26 to enter this giveaway. Increase your chances to win by sharing it on social media and/or following my blog. Make sure you tell me which you do. If you are new to my blog, make sure you leave your email address so I can notify you if you win. U.S. addresses only.

I love that you have wonderful books for Black History Month. These books look like they have vibrant pictures! Thanks for sharing.

Thanks, D. Wise. Please leave your email address if you wish to enter your name in the giveaway.

YEah! Thanks for leaving your email address and being first to comment!

I loved Candace's post about scenes over in NFFest. Thanks for guiding us through how this book does it! (I also love studying books about music as mentor texts!) My email is callie.b.dean@gmail.com

Thanks, Callie. You're in!

Thanks for your commentary about the book. Very insightful! I appreciated seeing the vivid illustrations, too. I’m a writer who is particularly interested in the topic because I Swing dance to Chick Webb and Ella Fitzgerald music. They were among the best from the Swing era. Email address is: sydniekleinhenz@gmail.com

That is awesome, Rose. I love your connection to the book!

I love the illustrations and the beat of the drums from Chick Webb! This is a perfect book to celebrate Black History Month! I shared on Twitter. @CathySOgren.

Thanks for sharing, Cathy! YOu're in twice.

Carol, great job on your Nonfiction Fest "assignment" with this book. I too am participating in this event to learn as much as I can. As a musician myself, I really want to read and study this book too--the spreads you shared are exciting and so vivid. I am happy to follow your blog as I find mentor texts too. I shared on pinterest, Facebook, and tumblr:
https://www.pinterest.com/pin/570620215293508279
https://www.facebook.com/danielle.hammelef/posts/10221368076525180
https://yesreaderwriterpoetmusician.tumblr.com/post/644024494490632192/stompin-at-the-savoy-a-nonfiction-picture-book

Thanks, Danielle. I knew you'd comment today and I appreciate how many times you shared this title! Your name goes in the hat 3 times!

My sister is a former drummer & I know she'll find this book interesting. I'm a follower of your blog. Thanks for the giveaway! turtle6422 at gmail dot com

Thanks Jana Leah, You're in!

I love that the amount of nonfiction picture books has exploded exponentially and I love that this book explores a wonderful musician. What an inspiring blog post!

I agree, Catherine. Thanks for stopping by. Your name is entered!

I'm excited you're entering the world of NF PB. I had a wonderful time publishing one PB bio that did very well years ago, and am currently having some real frustrations finding homes for three others.

I'd love to win a copy of this book! Love the stompin energy in that art!

I knew you'd love this art, Barbara. You're in twice!

I loved Candace Fleming's post. She had such great examples. Thanks for telling me about this book. It looks like a real winner.

Thanks so much for the kind review and for looking at the book using Candace Fleming's scenes and summaries analysis. She is phenomenal!!! I met her when I took a course on nonfiction writing at Highlights, so it is gratifying to know that some of her lessons came through when I wrote this book!

That's so cool that you took a workshop with Candace at Highlights. Yes, her teaching must have stuck in your head, Moira! Thanks for stopping by.