Saving Lady Liberty: Joseph Pulitzer's Fight for the Statue of Liberty- A Picture Book Review and A Giveaway- Part I

Like me, you might associate Joseph Pulitzer with the Pulitzer Prize. But, you might not know how he was instrumental in bringing the Statue of Liberty to the United States. Here is the inspirational story of Saving Lady Liberty  (Calkins Creek, 2020) which author Claudia Friddell packed into forty-eight informative pages. The illustrator, Stacy Innerst, is not new to my blog. Check out his illustrations from Lincoln Clears a Path. 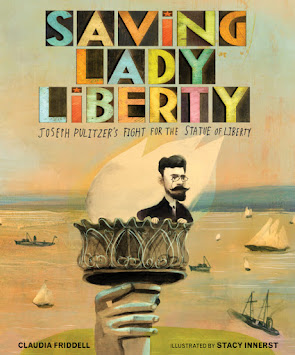 Joseph Pulitzer loved words. And the word he loved best was liberty.
Maybe that's because Joseph, the son of a wealthy Jewish merchant, enjoyed freedoms that other Jewish boys outside of Pest, Hungary could not. But after his father died when Joseph was eleven, his world changed forever.

That is Claudia Friddell's opening which lures readers into turning the page.
The book proceeds to show how Joseph was left penniless--unable to even get a job in the army because of his poor eyesight. But,
Pulitzer went from guard duty in the Civil War (where he'd rather plan battles on the chess board than be in a battle) to a poor immigrant who couldn't speak English (although he was fluent in French, German, Hungarian, and Yiddish).

After weeks of sleeping on park benches, Joseph hopped a train and headed for St. Louis--a city filled with German-speaking immigrants.

When he wasn't working or learning how to read and write English, Joseph played chess in the library. He caught the attention of an owner of a German newspaper and finally got a job he loved--he was a reporter!

Grateful for the freedom to write what he chose, Joseph uncovered corruption and inequality. His brash manner and relentless drive didn't earn him many friends but no matter--Joseph kept moving up until he owned the newspaper alongside his chess-playing boss.

Joseph married and traveled to the 1878 Paris World's Fair where he was entranced by Graham Bell's talking machine and the "colossal copper leaf of Auguste Bartholdi's unfinished statue, Liberty Enlightening the World.."

After being impressed with the statue, Joseph met Auguste. 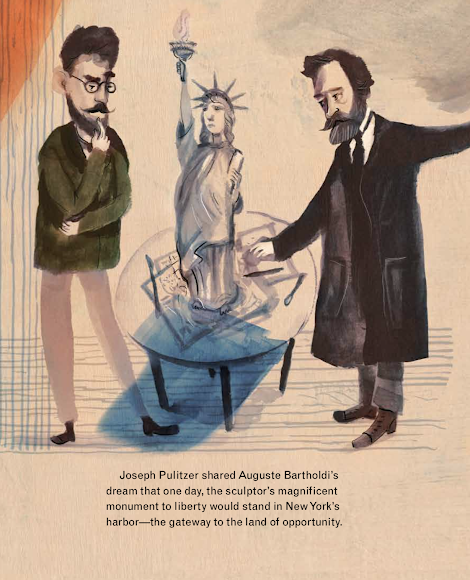 But although the United States had agreed to build a pedestal for the statue, New Yorkers didn't want to pay for it. When he returned to the States, Joseph vowed to convince his fellow citizens to pay to have the pedestal built and installed on Bedloe's Island (renamed Liberty Island in 1956).

Pulitzer bought the New York World newspaper and put Lady Liberty in the middle of the masthead:

https://www.loc.gov/item/sn83030193/1900-01-30/ed-1/
He wrote editorials and scolded wealthy NewYorkers.
What a burning disgrace it will be to the United States if the statue of the goddess is brought to our shores on a French government vessel and is met by the intelligence that our people, with all their wealth, have not enough public spirit, liberality, and pride to provide a fitting pedestal on which it can be placed!
No matter how hard he tried to raise the money for the pedestal, Pulitzer didn't have enough. Finally he came up with a new plan. "If a person donated even a penny, he would print their name and their story in the World." 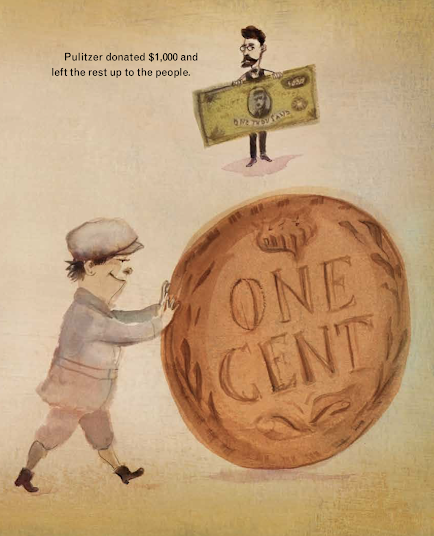 His idea worked. Stories poured in and Pulitzer printed them all. Two of my favorite pages show letters from children with their contributions. One child sold squash and pumpkins and sent in ten cents, another raided his "frog-bank" and combined his earnings with his friends for another ten cents. One kindergarten class sent in $1.35.
Finally, Lady Liberty was loaded into 214 crates and sailed across the stormy Atlantic. 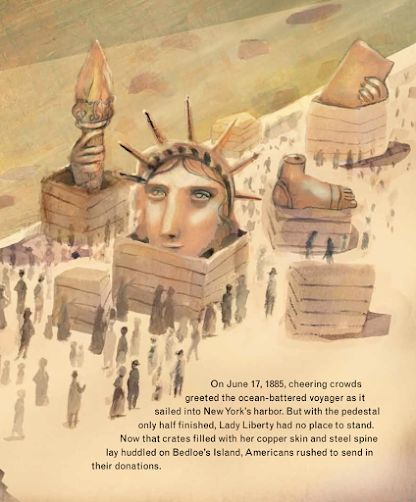 Of course, when the pedestal was completed, that was a newsworthy story!
Eight years after Pulitzer first saw Lady Liberty, he "witnessed Bartholdi unveil his magnificent monument ready to welcome every traveler with a torch of hope and a promise of freedom."
As the daughter of German Jewish immigrants, I imagine that the first time my parents saw Lady Liberty, they were filled with a mixture of fear, awe, and excitement. Here was the symbol of the country that would be their new home--a place of liberty.
****
Next week Claudia will answer questions about her research process and her path to publication.

This book is an excellent resource for any student studying immigration and American history. Eight pages of back matter include little-known facts about the statute and Joseph Pulitzer. Claudia Friddell has created an educator's guide with a variety of  activities for students in grades 2-6.

For more details about how the statue evolved and how it was connected to the end of slavery and Reconstruction, see this post.
GIVEAWAY
Leave a comment to enter the giveaway along with your email address if you are new to my blog. If you also leave a comment next week on the interview, then I'll put your name in twice. Winner's name will be drawn at 4 PM on July 16.  Continental U.S. addresses only.

Congratulations to Helena George and Kim Peterson who won copies of THE BUTTON GIRL.

This topic is awesome! I learned so much just from reading your post and now want to read this book for myself. A long time ago I was contracted by an educational publisher to research and write a nonfiction book about the statue of liberty so learning even more will be fun.

You would love this book,Danielle! Your name starts the list.

Enjoyed this post. Would love this book. A Joseph Pulitzer biography I read in 8th grade sparked my love of writing.

Thanks, Beth. I think it was on more than one person's list of books to write! Unknown, please leave me your name and address to enter the drawing.

This sounds like a wonderful book. Having grandparents who came through Ellis Island, the Statue of Liberty has always been an important symbol in our family.

This looks fascinating! It's not a subject that I would expect to be drawn to, but after seeing these excerpts, I'm hooked!

This looks great - Hanley just got her masters in history so I know she would enjoy it too!

Thanks Susan, Janet, and Cathy! It was fun putting this post together. Susan--you should get this book not only for your grandkids, but for Hanley as a congratulations present! (ha ha!(

I love the Statue of Liberty and what it stands for. Every schoolchild needs to know this story. Thanks for your review, Carol.

This looks so good! I love sharing history books with my kids. Real people make the best and most inspirational stories! I also go my degree in history, stories like this remind me why!

(Audiobooks@stephanienarrates.com is my email btw!)

This looks so good! I think children's history books are the best way to learn history. Storeis about real people often are by far the nest and most inspirational. I love sharing them with my kids! I also got my degree in history and stuff like this reminds me why.

I agree, Stephanie. Thanks for stopping by and thanks for leaving your email address.

You are welcome Lois. And thank for recommending my blog to your friend!

Dear Carol,
Saving Lady Liberty is a wonderful story! So glad Claudia wrote the story. Thanks for sharing it with us.

Thanks, JOan. I'll add your name to the list! It's a marvelous book.

This sounds like an amazing book! I will definitely recommend it to the librarians and educators in my district!

This sounds like an incredible book! I never to remember that Pulitzer worked to bring Lady Liberty to the U.S. I am going to have to have it for my classroom library! The illustrations look awesome!

Carol, I'm so glad you reviewed this book. I absolutely loved learning about Pulitzer's life and this particular mission to get a pedestal for Lady Liberty! Such a committed and creative human being! Claudia is an outstanding researcher and historical author.

Yes, she is Joyce. Thanks for introducing me to this book and its author!

Great blog post. We all need to know more about our county and our history.

Thank you, Terri. Come back next week for Claudia's author interview!

Great review Carol. Not only did I not know that Mr. Pulitzer was instrumental in bringing the statue of Liberty here, I had no idea about all the pieces that had to fall into place, the clever way he raised the funds to construct the pedestal, and bring it over to New York City! Illustrations look fantastic as well!

NF PB authors and historical novelists have something in common--we love to discover nuggets for our work! Nice to see you here, Kathleen.

What a wonderful review! I'm excited to check out the educator's guide. Thanks so much, Carol and Claudia!

A fabulous review! As an aspiring NF PB author, this was particularly valuable. Thank you!

thank you, Natalia, and welcome to my blog! I hope you sign up and come back again. I give away a lot of nonfiction pb!