Don't you love this cover? 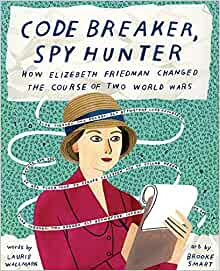 Besides being captivating, the title informs the reader EXACTLY what to expect from Code Breaker, Spy Hunter  (Abrams Books, 2021). Written by Laurie Wallmark and illustrated by Brooke Smart, this book will be good for students from 7-10 years old. As you look through these illustrations, make sure you read Elizebeth's quotes that are cleverly "hidden" within the illustrations!

Similar to many picture book biographies I have reviewed, Code Breaker has a brief glimpse into Elizebeth's childhood.  But there's a catch: this glimpse is provided after the reader meets Elizebeth as an adult working as a cryptanalyst and a spy catcher. In some ways, the book is a flashback from that introduction on the first two pages.
This glimpse into her childhood comes next. 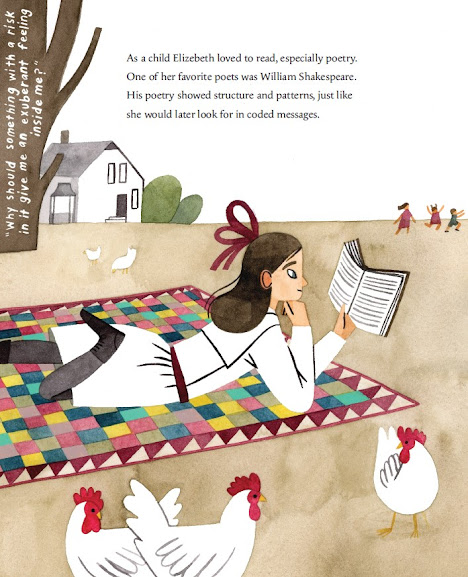 Elizebeth loved languages and studied English literature, Latin, Greek, and German in college. After going to Chicago to get a job in research or literature, she met George Fabyan, an eccentric millionaire who hired her to prove that Shakespeare's play were written by someone else. Although she never proved his hypothesis to be correct, she shared her conclusions with a scientist friend, William Friedman. Not only did he agree with her conclusion, but their friendship turned to love, and within a year they were married.
After the United States entered WWI in 1917, the government needed people to decode spy messages. Elizebeth and William set up the country's first code-breaking unit, the Riverbank Department of Ciphers. Their ground-breaking techniques became the basis for cryptology--the study of secret codes. 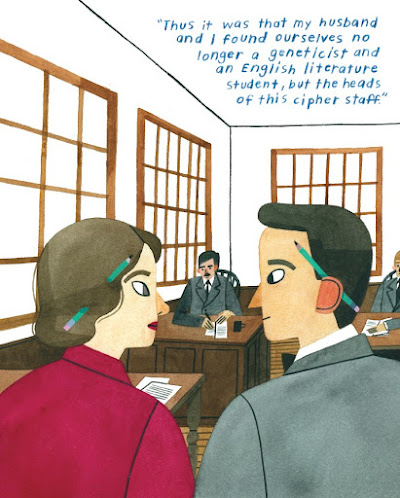 The couple moved to Washington, DC to work as code breakers for the Army's Signal Corps. Together, Elizebeth and William invented a scientific method to create ciphers--complicated codes--using only a pencil and paper. This was a necessary invention in order for field soldiers to send secrets.
After the war ended, Elizebeth stopped working full time in order to write books and start a family. 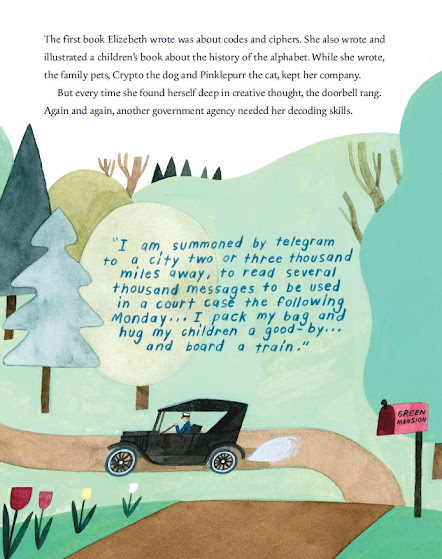 Elizebeth was hired by the Coast Guard hired her to catch bootleggers, she testified at criminal trials, and she trained the staff for the Coast Guard's first code-breaking unit.
But her home and family were also important to her. 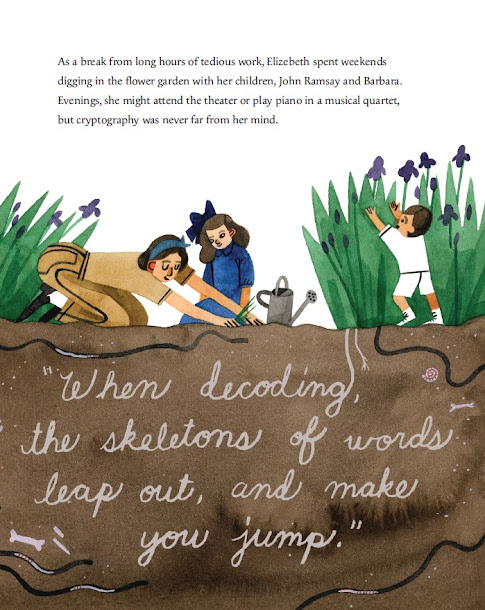 When the United States entered WWII, the Office of Strategic Services had gathered communications from around the world, but they were unable to break their codes. Enter Elizebeth. She created another code-breaking unit and hired and trained mathematicians, physicists, and chemists.

After Elizebeth helped capture Nazi spies, the U.S. Postal Service asked for her help. They had seized letters from an American spy; on the surface they appeared to be about buying and selling dolls. But Elizebeth decoded the real message.

The war's "Number One Woman Spy" was sentenced to ten years in prison. Elizebeth wrote, "It is obvious that even a casual examination of these letters, indicates their suspicious nature." 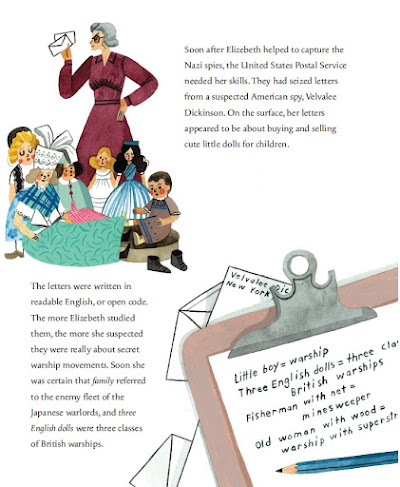 Elizebeth's work was top secret. She was even threatened to be put in prison if she spoke about it to anyone--even her family! Thirty-five years after her death her secrets were finally declassified. 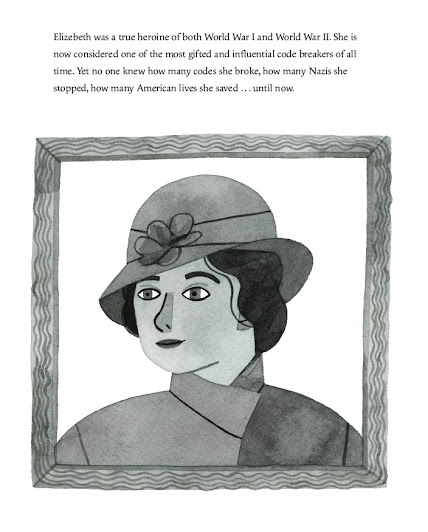 Five pages of interesting back matter concludes this book. The first is dedicated to "Codes and Ciphers" and includes instructions on how to decode the Caesar cipher written on the ribbons throughout the book. The second page is step by step directions for cracking a code, the third is information on Cryptology today--including hints for creating online passwords. The last two pages, a timeline and bibliography, are the end pages--what a clever use of space in this 42-page picture book!
Teachers and home school educators: Click here for a teacher's guide.

LAURIE: I have always found codes and ciphers fascinating. As a child I would create them and write notes that no one else could read. I found out about Elizebeth in Jason Fagone’s book, The Woman Who Smashed Codes. After reading her story, I knew she had to be a subject for one of my women in STEM picture book biographies. There’s also an excellent new YA book about her by Amy Butler Greenfield, The Woman All Spies Fear.

CAROL: This book seems longer than most picture books with a longer word count. In a publishing world of tight word counts, how did you swing that?

LAURIE: I seem to be able to get away with longer word counts than others. I can’t tell you why. This book, at 48 pages, not only has more text words, about 2,200, but quite a bit of back matter, too. It was quite a trick fitting it all in.

CAROL: What was your favorite part about writing this?

I think most of us who do any writing of nonfiction love doing the research. It’s delightful finding that special nugget of information that you know adds a little extra something to your book. The hard part is know when to stop researching and start writing.

LAURIE: Can you speak a little bit about the research involved?

I always start my research by reading books. That gives me a good overview of the person’s life and helps me figure out how I’m going to structure my book. Then it’s time to dig deeper. With Elizebeth, I’m lucky that many of her papers and photographs, both personal and professional, are archived in the George C. Marshall Foundation collection. I’m especially lucky that even during a pandemic, the librarian was able to help me with my questions. (Thank you, librarians everywhere!)

CAROL: It was fun to discover that Elizebeth’s quotes are hidden in the illustrations. Was this your idea or your illustrator’s?

LAURIE: I had used quotations in the illustrations with two of my previous books, GRACE HOPPER: QUEEN OF COMPUTER CODE and HEDY LAMARR’S DOUBLE LIFE. I believe the original idea was mine, but I wouldn’t swear to it. What’s different in this book is the ribbons of code that swirl around several of the pages. The illustrator had put in random letters to represent coded messages. I suggested that the letters should actually be coded messages. It was a lot of extra work for me to give Brooke the codes, her to hand letter the ribbons, and me to check them. I live in fear that a ten-year-old will find I’ve made a mistake. If you look closely at the cover, you'll see the ribbon of code.

Leave a comment by 6 PM on November 6 to enter this giveaway. Educators and librarians--you will get an extra chance if you tell me where you work. US addresses only. I am featuring this book in the January issue of Talking Story on "Behind the Scenes of War" and if you're a subscriber (if not, follow the link above and hit "subscribe") you'll have another chance to win the book if you don't win now. Please leave me your email address if you are new to my blog--if not, I can't enter your name!
Congratulations to Esther Bandy, a new follower, who won Kathleen Burkinshaw's audiobook of THE LAST CHERRY BLOSSOM.
at November 04, 2021

I have some little grandsons that will especially enjoy this book!! Great artwork! They will love the codes.looks like such a fun and informative book! I have some grands that will enjoy it. . . Especially the codes!

Trish, it's a fantastic book and your name starts the list! (get your daughter-in-law to enter. She's an educator and would receive 2 chances!!)

How neat that the author has woven codes into the book. It will be so fun to challenge my grandchildren to break the codes while reading the book.

What a fun book. It is so exciting to learn more about the women that helped in the Wars.

I agree, Carrie. Even if you don't win the book, I think your hubby would really enjoy reading it!

This book looks great!
Think my twins will enjoy it!
Zachary Snyder

Great post, can't wait to grab this off my library's shelves!

I'm a fan of all of Laurie's books. And it's hard to say which is a favorite.

This interview was fascinating and so is the topic. I've always enjoyed making decoding puzzles as well as working them out. I'm especially interested in reading the backmatter of this book. I read and loved Hedy Lamarr's Double Life and know I will also love this book.

What a great story! I love the way the code and quotes are incorporated. Thank you for the great post.

Thanks, Helen. Please leave your name and email address to enter!

Thanks Danielle, Jillanne, Terri, and Zach. I'm happy to add all your names to the giveaway.

There's a curriculum guide for this book on my website (www.lauriewallmark.com) that has a link to directions for making a decoder ring. Check it out.

Thanks, Laurie. I'll add the link to my blog!

Thanks, Joyce. The more I read it, the more impressed I was!

I have loved every one of this authors Picture books. They're such a joy to share with my kids!

Carol,
Thank you for interviewing Laurie. Her book sounds wonderful!

Laurie,
Thank you for telling us about your interesting book. I look forward to reading it!

This looks like a fascinating book. I love the use of hidden quotes in the pictures. Thanks for an interesting interview.

Thank you for stopping by, coducett515, but I can't enter you w/o name and email address.

Thanks, Esther. You're in!

I think there was a chapter on Elizabeth in the book Code Girls, because I remember being fascinated by her story. I'd love to win this book. Thanks for the great interview!!

Thanks, Melissa. You're in!

Hi Carol.
My school library is in Portsmouth, NH.

UNknown--I need your email address (and name) to include you in the giveaway.

OOps, sorry. My name is Tammi Truax, author of For to See the Elephant and a school librarian.

I'm so sorry, Tammi, but the giveaway ended yesterday!