I'm following my own advice, "If you want to write, READ!" Since I'm exploring writing picture book biographies, I recently read several of Nancy Churnin's excellent picture book biographies. When I saw that she had a new book coming out, I requested a review copy from Albert Whitman. Dear Mr. Dickens is illustrated by Bethany Stancliffe and a great curriculum resource for 4-8 year-old readers. 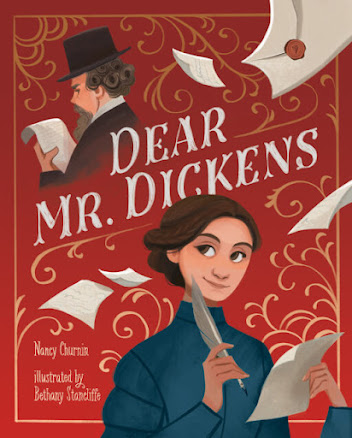 The year was 1863 when Eliza Davis decided to write to Charles Dickens.  She was a Jewish reader, who like many of her fellow Englishmen, paid two pence for his weekly magazine, All the Year Round. 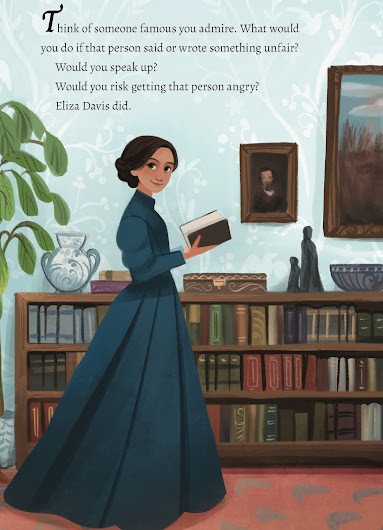 Eliza admired Mr. Dickens stories because they were filled with compassion.

.... he used the power of his pen to help others. When he wrote about children forced to labor in workhouses, people demanded change. When his readers were moved to tears by tales of families struggling in desperate, dirty conditions, they gave what they could to charities. As did Eliza.

Eliza loved his stories until she read Oliver Twist and read about Fagin, the "old shriveled Jew," who taught Oliver to steal.  Each time Eliza read Dickens' reference to the Jew,  "the word heart hurt like a hammer" on her heart.

Eliza feared her letter would make things worse. In spite of her fears, she wrote that his portrayal encouraged a "vial prejudice" and that he needed to "atone for a great wrong."

What would the great Mr. Dickens think?

He was not pleased and let Eliza know it! He wrote, "Any Jewish people who thought him unfair or unkind--and that included Eliza!--were not "sensible" or "just."

Eliza wrote back to him. In her second letter she wrote about his past, present, and future. 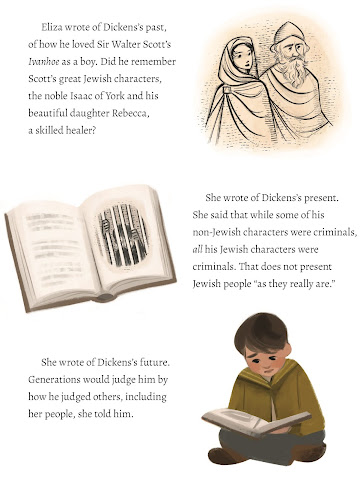 Finally, chapters of his new novel, Our Mutual Friend, began to appear at newsstands. Eliza "thumbed through the pages, shaking when she realized he had indeed created another Jewish character. Had her fears come true?"

In fact, it was the opposite. Mr. Dickens created a Jewish character and named him Mr. Riah, after the Hebrew word, re'a which meant generous and loyal.

"I think there cannot be kinder people in the world."

She sat down at her writing table and thanked Mr. Dickens for his great compliment to her and her people. 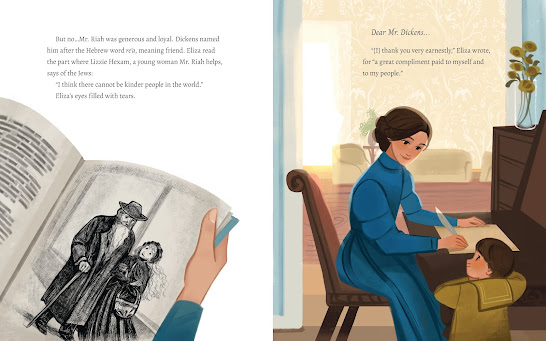 Eliza's letters had a profound impact on Charles Dickens. He published essays protesting prejudice and during Oliver Twist's reprinting he told his printer to substitute "Fagin" where he had written "the Jew" 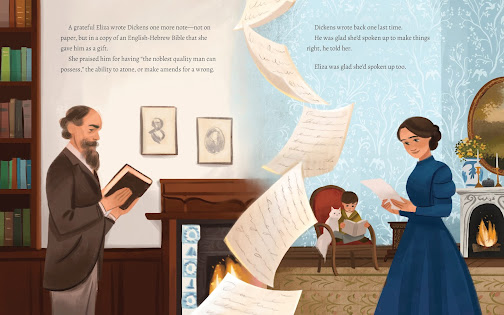 In their last correspondence, Eliza sent him an English-Hebrew Bible and praised him for making amends. Dickens wrote back that he was glad she'd spoken up to make things right.

"Eliza was glad she'd spoken up too."

BACK MATTER and MORE INFORMATION

The Author's Note includes extensive background about the history of anti-semitism in England as well as more information about Dickens and Eliza.
For more backstory about why Nancy wrote this deeply personal book, please see Kathy Temean's blog. All the questions I would have asked Nancy are answered there!
Teachers: Nancy has a lot of materials on her website for you to use in your classroom.

To enter the giveaway for my ARC (uncorrected proof), please leave me a comment by 9 AM on Friday, December 3. Teachers or librarians: Tell me where you work and I'll enter your name twice. Continental U.S. addresses only.

PLEASE NOTE: YOU MUST LEAVE YOUR NAME AND EMAIL ADDRESS IF YOU ARE NEW TO MY BLOG.

Congratulations to Susan Rice who won THE MEANS THAT MAKES US STRANGERS from last week's blog. Funny thing--her daughter graduated with Christine Kindberg too!

Thanks for highlighting this story of Charles Dickens, Carol. I am also interested in writing picture book biographies. I'm looking forward to seeing your book in print.

I'm eager to share this one with my family!
annettemwhipple at gmail dotcom

Thanks Annette and Lois. Your names start the list!

Thank you for alerting me to this book. My family is Jewish, so it is of special interest. ~ Amy Houts amysase [at] gmail.com

This woman is inspirational to me--to be able to convince Charles Dickens he was wrong in his portrayal of Jewish people is amazing to me. I loved the part where she wrote about Dickens' past, present, and future. This reminds me of our holiday family movie nights that are upcoming. Thank you for sharing your ARC with your readers.

Thanks, Amy for commenting and for leaving your email address. FYI, I plan to blog about a new MG novel, MIGHTY INSIDE, that I think will also interest you.

So glad you enjoyed the review, Danielle!

I'd love to share this book with my family. It demonstrates the power of speaking up and persistence.

Thanks for this insightful review, Carol. I love learning tidbits from history which I've never heard before. This sounds like a wonderful book.

Thanks, Sally, It is a great book!

Thank you for telling us about this book, Carol. It sounds like a wonderful book.

Thanks, Esther. You would enjoy it!

Great blog post. I want to read this story for sure and use it as a mentor text. thank you for sharing!