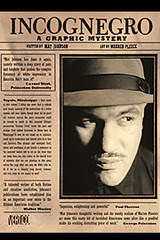 Good review. I don't really enjoy reading books this way but I know some people do and it's great to have good literature available in the graphic novel format.

I just bumped into this one somewhere else on the web.

For a nonfiction resource on mixed race issues and challenges, see Sundee Frazier's CHECK ALL THAT APPLY.

I, too, was a newbie to graphic novels. Then I read Greg Neri's Yummy. (A Coretta Scott King honor book this year)
Bears no resemblance to the comic books of our youth! Such power in these books.

Yes, Augusta, there is a lot more "meat" to these graphic novels!