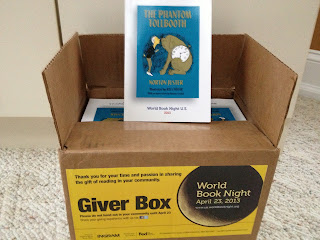 As a part of World Book Night, this year I will be giving away copies of The Phantom Tollbooth to students in my tutoring program. I regret not reading this book with my father--a true lover of puns, imagery, and wordplay--but I am glad that I finally savored it myself.

For those of you who have never read Norton Juster's classic tale of   Milo, the young boy who goes on a quest for something to enliven his boring life and returns enriched and ready for his next adventure, this post is a list of my (some!) favorite quotes. I hope they will entice you to share the book with another reader--old or young--who will enjoy Milo's adventures, Juster's imagination, and Jules Feiffer's illustrations.

So, without further ado and some brief explanations:

"I never knew words could be so confusing," Milo said to Tock as he bent down to scratch the dog's ear.

"Maybe if I buy some I can learn how to use them," said Milo eagerly as he began to pick through the words in the stall. Finally, he chose three which looked particularly good to him-"quagmire," "flabbergast," and "upholstery." He had no idea what they meant, but they looked very grand and elegant. p.47
*********
A small wagon is sent to pick up Milo and Tock. Milo is perplexed.

"Be very quiet," advised the duke, "for it goes without saying."

And sure enough, as son as they were all quite still, it began to move quickly through the streets... p. 79
*********
King Azaz the Unabridged has just asked Milo what he can do. When Milo admits he has no special talents, the king replies:

"What an ordinary little boy," commented the king. "Why my cabinet members can do all sorts of things. The duke here can make mountains out of molehills. The minister splits hairs. The count makes hay while the sun shines. The earl leaves no stone unturned. And the undersecretary," he finished ominously, "hangs by a thread. Can't you do anything at all?" p. 85

"Do you know where we are?" asked Milo.

"But how do you invent a sound?" Milo inquired.

"Oh, that's very easy," she said. "First you must decide exactly what the sound looks like, for each sound has its own exact shape and size...

"Take laughter; for instance," she said, laughing brightly, and a thousand tiny brightly colored bubbles flew into the air and popped noiselessly. "Or speech," she continued. "Some of it is light and airy, some sharp and pointed, but most of it, I'm afraid, is just heavy and dull." pp. 156-157
**********
Milo lands on the Island of Conclusions and queries a man named Canby:

"But how did we get here?" asked Milo, who was still a bit puzzled by being there at all.

"You jumped, of course," explained Canby. "That's the way most everyone gets here. It's really quite simple: Every time you decide something without having a good reason, you jump to Conclusions whether you like it or not. It's such an easy trip to make that I've been here hundreds of times.

"But this is such an unpleasant-looking place," Milo remarked.

"I should have known it," he mumbled, resting his tired legs and filling his lungs with air. "This is just like the line that goes on forever, and I'll never get there."

"You wouldn't like it much anyway," someone replied gently. "Infinity is a dreadfully poor place. They can never manage to make ends meet." p.193
**********
Milo and Tock bring Rhyme and Reason (two banished princesses) back to the kingdom and the king remarks:

"... as you've discovered, so many things are possible just as long as you don't know they're impossible."

And for the remainder of the ride Milo didn't utter a sound. p. 247
************
I read the 50th anniversary edition which includes comments and notes from authors and educators who were inspired by The Phantom Tollbooth. If you haven't read it yet, make sure to add this playful yet provocative fantasy to your "to read" list and share its delicacies with another reader.

To entice you further, here's a short video where you meet Juster and Feiffer:

One of my all-time favorite books which was made into a surprisingly good movie. I think I'll reread it soon.

I'll have to check out the movie, Rosi, maybe with my grandkids!

I'm glad you discovered this great book and shared your delight in it. I sometimes found it challenging to teach, but always hoped my students would revisit it as adults as you did.

I love the Phantom Tollbooth! Thank you, Carol, for posting the video of Norton Juster. It's always fun to meet the author. I think it is wonderful and admirable of you to give copies away to students in your tutoring program.

Clara,
I should have clarified this-- I don't give the books away, World Book Night does! you should check them out; great organization!