Plot Elements and What Happened to Goodbye: Part I

Congratulations to Ann Eisenstein who received a copy of Odette's Secrets in last week's giveaway.

In this ongoing mini-series of blog posts, I share more nuggets from my online writing class, Plot and Structure, with instructor Bethany Nuckolls.

********
As our class proceeded into analyzing Act II of our novels, Bethany explained the concept of Shock: “Shock is the moment when the protagonist’s world comes crashing down, their ideals prove to have a fatal flaw, their companions betray them, or their desire proves to be short of expectations.  This is the darkest moment in their journey thus far.  For the first time, success will seem impossible.  Doubt becomes certainty, bringing about the third point of Act II: the Critical Choice.” 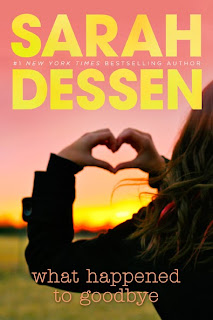 Since I had just finished listening to What Happened to Goodbye? by Sarah Dessen, I decided to use that to discuss this concept and  explore why I felt the book was emotionally compelling. I have included some of the previously discussed plot elements as well.

McLean, the 17-year-old protagonist, chooses to live with her father after he and her mother divorce. Her father’s job is helping faltering restaurants to either survive or close.  In the last two years, McLean has gone into each new school and established a new identity for herself along with a new name.  At one school she is a drama diva, at another a cheerleader, and most recently the student council secretary. Along with new names, McLean makes sure she never got attached to any of her friends since she knows she will be leaving soon.  This is her Stasis (original state).

She moves to a new school (Trigger)  and her pattern changes when she “accidentally” introduces herself as McLean and allows herself to develop new friends and a special friendship with the boy next door, Dave. As Dave and her group of friends work on putting together a model of the town (a superb example of an objective correlative of McLean’s life) she builds relationships and enjoys eating at one of the girl’s homes (Food, and the lack of eating together with her father is another objective correlative). When her friends look on a popular social media website, and discover that her email address is associated with four different names, they question who McLean really is--a question she is already asking herself. They react with distrust and she sinks into self-doubt.

I don’t remember if I cried at this point (although something in this book triggered tears); Dessen built up to this Shock point very cleverly and logically, but it still took me by surprise. McLean’s sense of loss when she realizes she has betrayed her friends by not revealing these past “selves” totally makes sense. It is definitely her "Point of No Return." After this, the book moves into the end of Act II when McLean faces her Critical Choice: Will she join her father when his next job takes him to Hawaii, or will she find a way to finish her senior year with her friends?

After I posted my analysis, Bethany commented, “Indeed, the Shock is not necessarily supposed to shock the reader (via the definition of "surprise"). Rather it shocks the lead character, and if the reader has drawn close enough to that character in the meantime, it should emotionally affect the reader as well.
********
Next week I'll continue my review of this beautifully-written young adult novel and will share examples of the tension elements which Dessen employed.

I've been meaning to finally read a Sarah Dessen novel- maybe this is the one? I like restaurants, lol! Great, helpful post!

Thanks, Leandra. If you like restaurants and YA novels-- you'll love this one!

I will definitely have to check this book out. I look forward to the rest of your review next time. Thanks, Carol.

I think you'll love this book, Rosi! Thanks for following.

Carol,
I began reading Odette's Secrets last night. Next, I'll read this one. I knew I'd benefit from doing the recommended reading as the study and tips were discussed.

You are great to offer this to your followers. Thanks! Your posts are always top quality!

Congratulations to Ann on winning the copy of Odette's Secrets.It's hard to put down.

Thanks to you, Carol, this book is on my list. I appreciate your sharing the wealth of knowledge you are gaining from this class.

Just wrote "SHOCK" in enormous letters on the ongoing list I'm keeping of revision ideas for my WIP. Thanks!

Glad these book reviews are of benefit to all of you--the writing community is all about sharing, isn't it? Thanks LInda, LInda, & Barbara for stopping by and leaving comments.

Excellent explanation of shock. Now if only it was that easy to write it...(Sarah Dessen makes it look easy.)

Yes, she does Kim!

What great information. Sounds like a class I'd enjoy taking. Where???
I love Sarah Dessen books. Haven't read this one, but am going to the book store today! Love hearing about new books and ways to make mine better.

Sheri, just follow the links in the blog. It's an online class that I'm taking through the Center for Writing Excellence. Glad to recommend books--and I just picked up "The Other Half of my Heart." thanks to you! You can find the class at:http://www.janiewrites.com
look under workshops.