*********
As I begin the fourth major draft of Half-Truths, I need to attack some of my writing weaknesses. According to my writing coach Rebecca Petruck, I have to work on my "internal-life writing muscles." To do this, she assigned me this task:

Type several dialogue-free passages from books you would like to emulate. Type at least three pages to get the rhythm. Then, type at least five dialogue-free pages from Kate’s POV and then again from Lillie’s POV.... Think about the difference between rote description, and description that reveals something about the character. When you describe the external world around them, it has to be in order to reflect how they interpret it, what it means to them and how it feels. 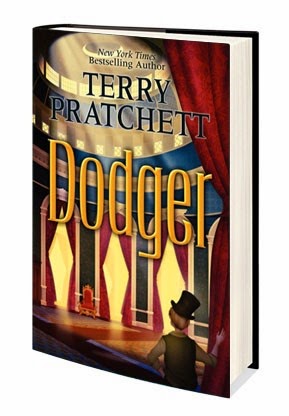 I'm beginning this assignment by sharing a dialogue-free passage from the latest book I listened to, Dodger, by Terry Pratchett. An historical fantasy spin-off of Charles Dickens' character, the Artful Dodger, it is an entertaining and funny book--albeit at times irreverent. Here is a brief blurb from Pratchett's website for context:


A storm. Rain-lashed city streets. A flash of lightning. A scruffy lad sees a girl leap desperately from a horse drawn carriage in a vain attempt to escape her captors. Can the lad stand by and let her be caught again? Of course not, because he's….Dodger….Dodger's encounter with the mad barber Sweeney Todd to his meetings with the great writer Charles Dickens and the calculating politician Benjamin Disreali, history and fantasy intertwine in a breathtaking account of adventure and mystery.


The following excerpt occurs after Dodger rescues the girl and "Charlie" Dickens and Henry Mayhew take them both to the Mayhew household.


Twenty minutes later Dodger was sitting close to the fire in the kitchen of a house, not a grand house as such, but nevertheless much grander than most buildings he went into legally; there were much grander buildings that he had been into illegally, but he never spent very much time in them, often leaving with a  considerable amount of haste. Honestly, the number of dogs people had these days was a damn scandal, so it was, and they would set them on a body without warning, so he had always been speedy. But here, oh yes, there was meat and potatoes, carrots too, but not, alas, any beer. In the kitchen he had been given a glass of warm milk that was nearly fresh. Mrs. Quickly the cook was watching him like a hawk and half already locked away the cutlery, but apart from that it seemed to be a pretty decent crib, although there had been a certain amount of what you might call words from the missus of Mister Henry to her husband on the subject of bringing home waifs and strays at this time of night. It seemed to Dodger, who paid a great deal of forensic attention to all he could see and hear, that this was by no means the first time that she had cause for complaint; she sounded like someone trying to hard to conceal that they were really fed up and trying to put a brave face on it. But nevertheless, Dodger had certainly had his meal (and that was the important thing), the wife and a maid had bustled off with the girl, and now…someone was coming down the stairs to the kitchen.

It was Charlie, and Charlie bothered Dodger. Henry seemed like one of them do-gooders who felt guilty about having money and food when other people did not; Dodger knew the type. He, personally was not bothered about having money when other people didn't, but when you lived a life like his, Dodger found that being generous when in funds, and being a cheerful giver, was a definite insurance. You needed friends--friends were the kind of people who would say: "Dodger? Never heard of 'I'm, ever clapped eyes on 'im, guv'nor! You must be thinking of some other cove"--because you had to live as best you could in the city and you had to be sharp and wary and on your toes every moment of the day if you wanted to stay alive.

He stayed alive because he was the Dodger, smart and fast. He knew everybody and everybody knew him. He had never, ever, been before the beak, he could outrun the fastest Bow Street runner, and now that they had all been found out and replaced, he could outrun every peeler as well. They couldn't arrest you unless they put a hand on you, and nobody ever managed to touch Dodger.

No, Henry was no problem, but Charlie--now, oh yes Charlie--he looked the type who would look at a body and see right inside of you, Charlie, Dodger considered, might well be a dangerous cove, a gentleman who knew the ins and outs of the world and could see through flannel and soft words to what you were thinking, which was dangerous indeed. Here he was now, the man himself, coming downstairs escorted by the jingling of coins. (pp. 6-7)

Rebecca encouraged me to figure out where my characters are coming from. In this excerpt, narrated by the omniscient narrator, but in Dodgers' close POV, I learn that Dodger is coming from a place where:


In other words, Dodger sees the world of London through a lens of "I have less money than the rich, but that doesn't bother me, because by my wits and speed, I get what I need." The reader meets a character who feels confidant about himself and moves with ease--unless he is up against another person who is equally good at reading people and their motivations as he is.

Pratchett has portrayed a character who I want to find out more about and who I want to root for-- as he goes from being a tosher (one who scavenges London's sewers) to a…wait, I don't want to spoil this book for you!

This week I'll be attending the Table Rock Writer's retreat where I'll be studying with John Bemis and Dawn Shamp. I'm hoping to strengthen my "internal-life muscles."

So, watch out Kate and Lillie! You're about to grow deeper, inner lives.

You chose a great passage, and your analysis is spot on. I'm so impressed you've done this already when we spoke only two nights ago! You are such a hard and smart worker--I can't wait to meet the next iterations of Kate and Lillie. Keep going!

Ah, Rebecca. I have a great instructor!

I agree with Rebecca. You are a model student and I'm delighted to be headed for the mountain with you today so we can both learn something new!

This is a terrific exercise, and you did choose a great excerpt. I'll be interested to hear if you find that this is really helpful to you.

Carol,
You selected a descriptive passage that reflects character beautifully. I know you'll demonstrate the same in your novel. Complete confidence in you!

Carol, Thank you for sharing Rebecca's exercise-it is extremely helpful! I cannot wait to see what you do with Kate and Lillie!

Thanks LInda and Kathy. Working on my characters this week!

GOOD stuff, Carol! I am taking notes for my own work! YEAH baby!