If you missed last week's post, I shared ten things I learned In John Claude Bemis's writing class at Table Rock Writers retreat. John also spoke to the entire group on, “What Creative People Can Learn From Children.” After quoting Picasso: “Every child is an artist.  The problem is to remain an artist once we grow up,” John shared ten ways writers should emulate children. In this post you’ll read his first five points with pictures and videos illustrating his points, courtesy of my grandchildren. Next week this series concludes with John’s last five points and the giveaway of his book, The Prince Who Fell From the Sky.

First of all, kids love to play—it’s basically their job! Children make up games on the playground and in their own backyards. Their dolls and trucks act out fascinating stories as children “disappear into their imaginations through play.”

In the same way, adults also need time to play. Companies like 3M and Google have found that giving their employees time to pursue individual interests, take a walk, or even play pinball leads to more innovative work. “Google claims that 50% of their new products come from ‘Innovative Time Off,” John noted.

Play also increases problem-solving ability. A study found that preschoolers were more apt to figure out an unfamiliar gadget than college students because they played with it.

What does this mean to us as writers? Make sure you do something fun each day. Don’t be afraid to play with your work. “Don’t stick to your first pass at the story….Have fun making your writing better.”

Secondly, everything is brand new to a child. These years are a “time of great wonder and stimulation.” When we’re running down an idea for the first time, the newness “sparks our curiosity and creativity.” John explained that from a neuroscience perspective, our brains are building synapses, which boosts creativity and makes our brains function better. John recommended playing a new game, learning a new instrument, or traveling to a foreign country. Citing his own recent trip to Rwanda, John said travel “gets you out of your normal rules and challenges you to be flexible.” He experienced a huge creative bump when he returned home—and wrote like a maniac!

Third, kids embrace ambiguity. To them a pen can be a wand, a sword, a dragon bone, or a bridge. We’ve all seen kids playing with a box rather than the toy that was inside.
Why? The toy has a specific purpose—but the box can be anything. John said this was the type of creative thinking that allowed Picasso to pick up bicycle handles and see a bull’s horn.

John recommended that writers should embrace ambiguity as a source of discovery. Perhaps a typo on a page can lead you to a new idea. Flipping through magazines or pictures in the Apples to Apples game may stimulate a new path for your writing. “The ambiguity loving part of our brain can make wildly original connections if we just let it.”
Fourth, kids have unlimited interests.  Mason created a story in which he starred as a super-hero. His cousin Caitlin (pictured below) described herself as a scientist with a telescope but also imagines herself as a ballerina, likes to cook in her kitchen, and fix things with her own set of tools. 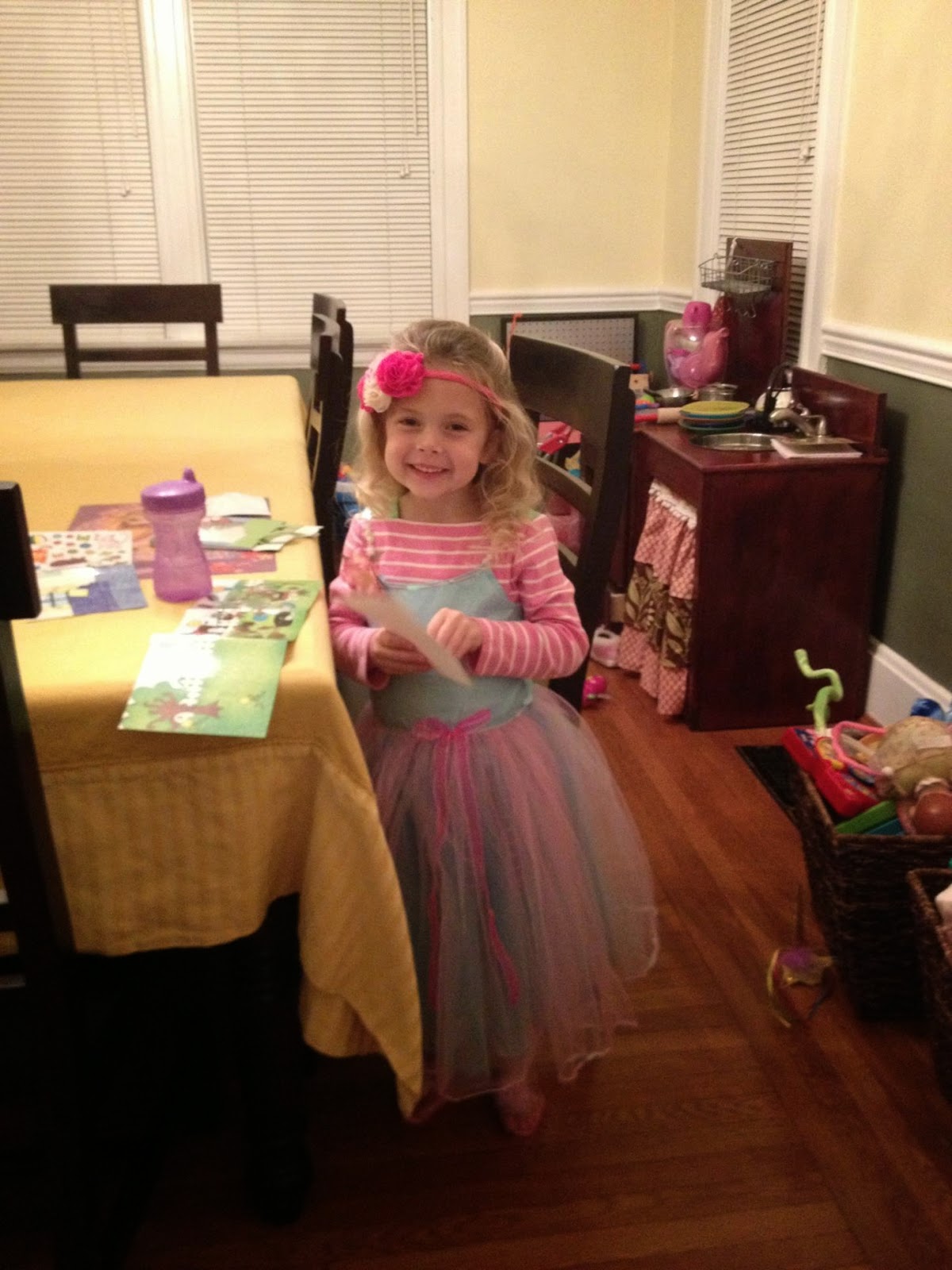 Young kids think they’re good at everything, leading them to explore a wide variety of interests.

Unfortunately, when kids hit middle school, they begin to form a sense of identity based on what they think they are and aren’t good at.  They say things like, “I’m not an athlete. I’m no good at math.” As we age, our interests tend to narrow, constricting our choices. As writers, we need to keep expanding our horizons.

This type of blind confidence makes a person keep doing something over and over again. Some writers dream of becoming NY Times Bestsellers. This confidence helps them work hard and push through discouragements during their early years.

When you hear that self-critical voice whisper in your ear, “You’ll never get published,” remember the self-confidence and stamina you had as a child. “To be successful, you have to be persistent.  And to be persistent, you have to manage the negative thoughts that want to keep us from continuing to try.”

Email ThisBlogThis!Share to TwitterShare to FacebookShare to Pinterest
Labels: grandchildren, John Bemis, learn to play, pretend, Table Rock Writers Retreat, think outside the box, What writers can learn from children

Thanks, Carol. This is great stuff. I am really enjoying reading this series. I think we all need to work on allowing ambiguity to sneak into our thinking.

Clever application of John's teaching points, Grandma Carol! And this kind of "field work" is such hard work, isn't it?

Thanks, Rosi and LInda. Yep--hardest work around, Linda! Rosi-I'm totally with you on the ambiguity part.Hard for me to do too!

Thanks, Barbara. Grandkids are so much fun!!

That information is so true. I believe if you write for children, you need time to play with children. I also think if a child has a positive experience in anything, he/she will be more experimental as an adult. Great ideas!!

Thanks, Sheri. I love my play time with my grandkids--they can teach me a lot!

I need the reminder to keep learning new things and to play with new way of approaching the story.

I really enjoyed the little girls dressing up and sharing art work!

Carol, Thank you for sharing John's wisdom of going back to our childhood world of wonder!! I love your Japanese princesses!! Very pretty!

Thanks JOyce and Kathy. I love playing with these kids! I want their imaginations to rub off on me!