The Spy Catchers of Maple Hill AND a Giveaway!

Congratulations to Ann Eisenstein, a fellow SCBWI-Carolinas writers, who won an autographed copy of Sheri Levy's novel, Seven Days to Goodbye. Thanks to all of you who entered. Here is another book to try and win!

As I considered how I would review the most recent book I listened to, The Spy Catchers of Maple Hill, I thought how the historical setting played such an integral role in this story.  Applying what I learned in Emma Dryden's workshop, here are some of the tenets which govern the protagonist's, Hazel Kaplantsy, world:

First of all, the bigger world in which Hazel lives in is governed by the facts that:

1. In 1954, Communism is a very real threat.
2. Fall out shelters and air raid drills are necessary.
3. Senator McCarthy has a right to search for spies in Hazel's small New England town of Maple Hill.

1. Maple Hill is a sleepy, boring town that Hazel will leave as soon she grows up.
2. It's normal to grow up living and playing in a cemetery.
3. Hazel's best friend has just moved away and most probably her next best friend will leave her too. 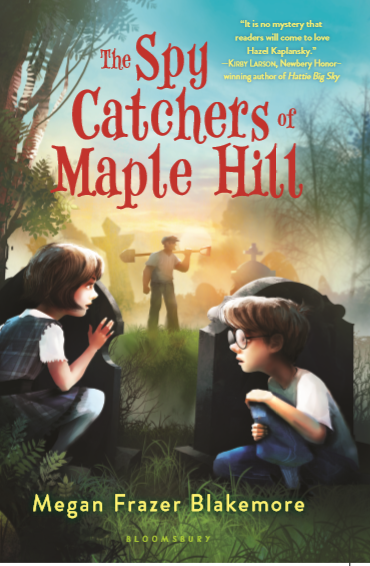 These tenets are the framework upon which Megan Blakemore has built Hazel's dream of showing the world that she is as good a detective as Nancy Drew.  But while Hazel is always ready to find evidence that supports her pre-formed conclusions, her new friend Samuel is the voice of reason suggesting that she might not always correctly interpret the facts.

The backdrop of the McCarthy era forms a perfect canvas for this upper elementary book for girls. When Hazel's favorite librarian warns her that it is a dangerous thing when a "whisper becomes a rumor and a rumor becomes a fact" she is speaking truth not only about the McCarthy investigation at a local factory, but also to Hazel herself. Hazel's moment of truth comes when she realizes that her erroneous accusations are just as hurtful as the smashed window in her favorite Chinese restaurant.

For more information on deep world building, check out Emma Dryden's blog. As a bonus, here are two worksheets on world building from Brenda Windberg of Free Expressions Seminars.

I'm giving away a copy of the audio CD of this entertaining and informative book. To enter, please leave me a comment before 9 AM on Friday, October 24. If you want a second chance, become a new follower or share this on your social media of choice and let me know what you did. Be sure I have your email address too!

I always enjoy your reflections, Carol. And I really loved Emma Dryden's workshop.

Thanks Joyce, You're in!

I had always assumed world building was a science fiction writer's tool - until this same workshop when I realized historical writers had to also build the world for the reader to understand the story. Add my name to your list, please.

thanks, Gretchen. Will add your name. You would love this book!

Like Gretchen, I thought of world building as a fantasy tool. Interesting. Sounds like a great workshop. Please let someone else win. I am not much of an audio book person.

Thanks, Rosi, for leaving a comment--even when you don't want to win! Yes, it was a great workshop.

Once again, I loved your description of the story and the skill of world building. You have such a great writing style! Please let someone else win the audio.I'd rather read it..

Thanks, Sheri. You will enjoy this book! Wonderfully written.

Carol, thank you for sharing Emma Dryden's worksheets and for the summary of The Spycatchers of Maple Hill. What an interesting time in history to portray!

Thanks Kathleen. SOrry I've already picked a winner. But I have a great book I'm offering next week too!