Liesl's Ocean Rescue and a Giveaway!

Congratulations to fellow blogger, Rosi Hollenbeck, who won an autographed copy of Maggie Dana's book, "Riding for the Stars."

Liesl's Ocean Rescue, an historical picture book struck a personal chord for me. It begins with the awful events that surrounded Krystallnacht; an event which deeply affected my paternal grandparents. Like Liesl the main character in Barbara Krasner's story, my mother also escaped Nazi Germany at a young age and took an ocean voyage to America. But unlike Liesl, my mother's ship docked in New York City and her family quickly traveled to Ohio to establish a new home. 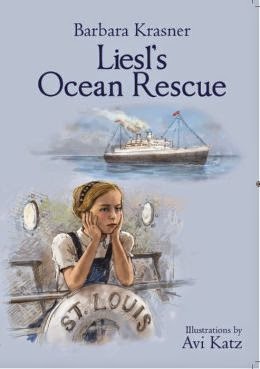 Based on the true story of Liesl Joseph Loeb's voyage on the MS St. Louis, Liesl's journey was different. When the ship attempted to enter Havana on the way to America, the Cuban government refused permission to dock. After almost a week of negotiations, the ship--filled with over 900 individuals trying to escape concentration camps--was forced to return to Europe. Although Liesl's family came to America two years later, over two hundred of their fellow passengers did not survive the war.

Although every page is full of black and white illustrations by artist Avi Katz, this poignant picture book will best be appreciated by children from 8-10 years old. It will enhance classroom instruction about the Holocaust, bring alive the difficulties that immigrants often face, and offer a great starting point for discussions about war and freedom. A teacher's guide can be found here.

I would like to pass along my gently-used Advanced Readers Copy of this book. To enter, leave me a comment by Friday, November 28. If you are a teacher or plan to donate the book to a classroom library, let me know and I'll enter your name twice.

So often, these stories don't survive because no one knows to tell them--or, just as sad, the details get lost because no one thinks to write them down. It must be reassuring to know that Liesl's story will be remembered by friends and relatives. Too, that it will no doubt spark conversations among those who have similar immigration tales in their own family backgrounds,

Thanks, Melodye. You're the first one "in" I agree, these conversations are priceless.

It's always touching when we find ourselves and our families in the pages of a good book.

The Holocaust has always been a fascinating part of history to me. My emotions range from extreme sadness for the victims; intense revulsion for the perpetrators and an unending hope and prayer that future generations will learn from and never repeat these events. This is a part of history that all people need to know and remember and I am anxious to share this with my granddaughter.

Thank you, JOyce and Connie, for your thoughtful comments. I agree Joyce, it is very meaningful when we can personally related to a book. Connie, I'll enter your name in the contest on behalf of you and your granddaughter.

Carol,
Great post and giveaway. Due to several recent wins, I won't ask to be included in the drawing, although this book does sound like a keeper!

Thanks for passing along a story that needs to be heard!

Thanks Linda. APpreciate your faithful following of my blog--and graciously suggesting that someone else wins this time!

This is such an important book and so beautifully done. Barbara Krasner as given a great gift to children with this book. I'm glad the word is getting out about it. Please don't put my name in the drawing. I've already had a copy to enjoy.

I can see how this would touch your heart. It looks and sounds like a wonderful depiction of historical facts.

Thanks, Linda. Yes- you would know how this book touches my heart!

Thanks, everyone. Researching and writing this book has been very close to my heart.

I'm sure it was, Barbara!

On behalf of Kim Van Sickler, I'm posting her comment which I accidentally deleted: "How horrific: making that traumatic journey just to be sent back home again. Quite a story and learning opportunity."