Congratulations to Linda Phillips for winning a copy of Grace Ocasio's book, The Speed of Our Lives.

In August I reviewed Maggie Dana's book,  Turning On a Dime. When I asked her if she would share about her love for all things equine, she sent me this post which first appeared on Tudor Robins' blog. I know you will enjoy this glimpse into how Maggie used her life experiences to inform her writing.
*******

As I writer, I am often asked, “What got you started and how do you come up with ideas for stories?”

The first question has many answers; so does the second, and writers have covered most of them, such as: I’ve always wanted to write . . . my high-school/college English teacher told me I was a natural . . . friends can’t wait to read my next story . . . I have so many ideas, I can’t keep up with them.

And they apply to me, too. But my favorite questions, though, are these:“How old were you when you learned to ride?” and “Where did you do that?”

Being a rider and a writer, I couldn’t wait to answer.

Back in the dark ages, when helmets weren't required and we all rode in whatever outfits we could cobble together, my first riding lesson scared me so much that I didn’t try again for another three years. But all it took was the right instructor at the right stable, and I was hooked on horses for life.

My new riding teacher, Tom Taylor, was strict, but he understood kids. He drilled us on the flat and over jumps, relentlessly, without reins and stirrups — we knew better than to complain — and when we flubbed up, Tom climbed onto our horses and showed us how it should be done. No matter how cranky our horses had been, they were complete angels with Tom.

On top of all that, Tom's stable was slap bang in the middle of Pinewood Studios, England’s version of Hollywood (now home of the James Bond films, Superman, and several other blockbusters)... 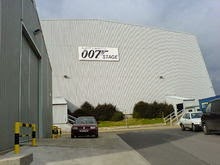 . . . complete with gigantic sound stages, odd-looking props, and movie stars wandering about in full makeup and costume. Just imagine being eight years old, riding a scruffy pony, and seeing ALL THIS AMAZING STUFF as you trotted toward the paddock where your riding lessons were held.

In addition to horses and ponies, the stable boasted a Jersey cow, two belligerent sheep, and a gigantic pig that had one litter after another. Added to this mix were numerous chickens, ducks, and turkeys that pecked at your feet if you weren’t super careful.

Us kids -- the stable rats -- took care of them all. To pay for our riding lessons, we also mucked stalls, groomed horses, stacked hay bales, helped beginners tack up and mount, and made sure the animals didn’t escape.

So, of course, they did.

One afternoon, Mother Pig and her ten piglets got gloriously loose among tea roses, herbaceous borders, and topiary trees at Pinewood's most prestigious garden party.

Picture, if you will, starlets with flowery hats and six-inch heels. Imagine film producers in tuxedos, sporting gold chains and Rolex watches, glad-handing gossip columnists and wealthy investors. Think about starched waiters circling with trays of chilled champagne. Then conjure up Mama Pig and her exuberant offspring zooming among designer-clad legs, upending buffet tables, and disappearing into the well-ordered shrubbery . . . all pursued by us delighted stable rats. 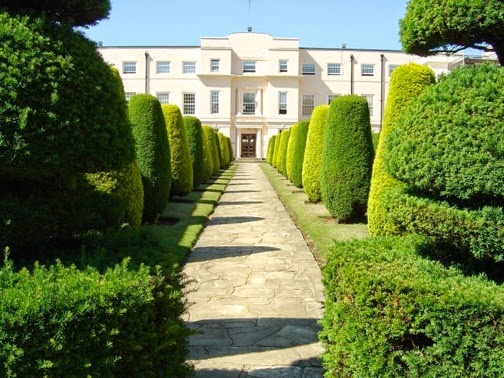 We made it last as long as we could. The last piglet wasn’t captured until well after supper.

But my best memory is about Maud, the Jersey cow, when I was put in charge of leading her from the stable and onto the set of a war film that involved rescuing a valuable cow from the German-occupied Channel Islands. 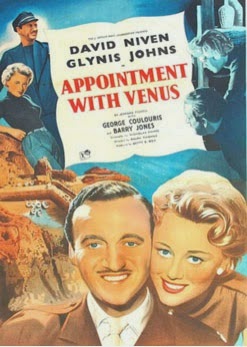 The story (based on a best-selling book) called for a Guernsey cow — brown with white patches — and Maud was a Jersey (think Exmoor pony for color, as in beige). Now, this was a black-and-white film. The shade of brown wasn’t crucial, but the white patches were. So the film crew got to work with brushes and buckets of white paint while I held the cow … and it took rather a long time.

All this was heady stuff, especially for me — an awkward eleven-year-old — and I was beginning to relax when Maud ruined her moment in the spotlight by relieving herself all over the sound stage’s concrete floor.

A cow plop would've been bad enough, but this was urine.

It splashed, it ran everywhere. I thought I would die of embarrassment. Everyone doubled up with laughter, even the tight-lipped director. David Niven, the movie's star, collapsed into his canvas folding chair and insisted the scene be written into the script.

A few years later, when I wound up working at the studios for Richard Attenborough and Jack Hawkins, I worried that someone would bring up the Maud incident, but nobody did.

Now that you’ve heard all this, you might wonder how I’ve used it in TIMBER RIDGE RIDERS, my horse books for kids. Mostly, I’ve pulled on my riding experience, the lessons I learned from talented instructors, and the experiences I’ve had at horse shows. But in the third Timber Ridge Riders book I was able to use my knowledge of the movie industry. The book is called RIDING FOR THE STARS, and it’s one of my favorites of the series. 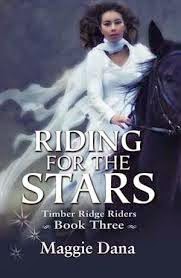 Leave a comment by 6 PM on November 20 for a chance to win an autographed copy of RIDING FOR THE STARS. It would make a great holiday present for your daughter, granddaughter or niece!
Maggie Dana also writes women’s fiction. Her novel, Painting Naked, published by Macmillan, is available on Amazon and other e-book sites.

I never owned a horse but my friend and I used to visit an older couple who owned horses and they allowed us you ride. This book sounds like a wonderful read for a horse-lover!
Thank you for this interview and giveaway.
Connie
cps1950 at gmail dot com

Thanks, Connie. You're the first one in!

Ahhhh! An autographed copy for my granddaughter would be wonderful! Thanks for allowing me to enter the drawing!

Happy to have you on board, Gail!

Oh, I have to read this! My daughter rode and I have lots of stories in my head from her experiences. Sounds like a great read. I will share your blog a many times with her horse friends. One is riding in the Rolex and is listed for the Olympics.
Sheri Levy918

Thanks for sharing, Sheri!

Maggie and Carol,
I am not a rider, but I know people who live to ride. The book about the stars must be full of great events.

I won't ask to be included in the giveaway since I won a gift from your newsletter drawing. I did want to comment anyway though.

I bought a horse when I was eighteen, in love with the idea of owning a horse but not the reality. Ah, the stories. I never thought to use them in a book, but now I will. What a delightful post. I enjoyed every word. The book sounds wonderful. Thanks!

how well I know that feeling of falling in love with the idea--but not understanding the reality! You're in Rosi!

Thank you Carol for allowing me to carry on about how I began riding. It doesn't seem quite possible in today's world that a stable could have existed in the middle of a movie studio . . . but it did. And the film people loved it. When they needed an animal for a scene, they just sent someone to the stable: "Do you have any ducks?"

"We have two. They're named Tom and Jerry."

And of course the piglets.

What an amazing place to have as part of your childhood, Maggie. thanks for sharing it with the rest of us!

Maggie, I'm half scared to death of getting on a horse, but I loved hearing these fun horse stories. The books sound like great reads. I'll pass on the drawing since I've just won one but I'll remember to check out your books for my granddaughter.

My daughter and I both have read (and loved) several books of this series. My daughter would love an autograph copy!
Thank you for this fab post.
Campbellamyd at gmail dot com

Thanks, Amy. YOu're in and I appreciate you leaving your email address too.

Thanks Maggie and LInda for leaving comments, and scooting over for others to win!

Carol, thank you for this spotlight on Maggie Dana. What an interesting and fun way to experience animals. I can just picture the entire cow scene! I love learning the story behind the stories :)

Thanks, Kathy. Your name is in the hat!