The Secret Sky:A Novel of Forbidden Love in Afghanistan and A Giveaway

This new young adult novel by Atia Abawi, a foreign news correspondent stationed in Afghanistan during the war, has all the elements of Romeo and Juliet: young lovers from families of different social status and backgrounds, parents who disapprove of their relationship, a jealous cousin, deaths of innocent secondary characters, and a clandestine marriage performed by a sympathetic priest.  Except this story takes place in modern day Afghanistan and (spoiler alert!) it does have a happy ending. 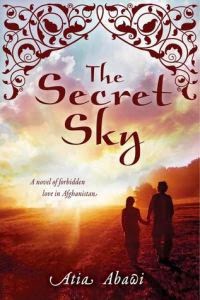 Abawi lifts the veil into a society that will shock most Westerners. She portrays a modern world set in a remote Taliban-controlled village where not only are marriages arranged by parents, but teenage girls and boys can’t talk privately without being accused of sexual immorality and girls risk death by the hands of their fathers for meeting a boy alone. Add to this that girls don’t attend school and upper-class boys go to school to become Taliban soldiers—and you have the key world building components of The Secret Sky.

Into this world step childhood friends, Fatima, who is Hazara and Samiullah who is  Pashtun. Samiullah has just returned from the Taliban controlled school and Fatima doesn't know why. The two meet surreptitiously and confess their love for one another. Stakes are raised when Rashid, Samiullah’s jealous cousin, sees them and reports their meeting to the couples’ fathers.  Believing that the only way to save Fatima’s honor is by declaring his intention to marry her,  Samiullah actually digs a pit so deep that they must escape.

Told from three points-of-view, each character’s journey is full
of external and internal conflicts. If Fatima leaves her deeply-loved family she will surely cause them shame. Samiullah constantly wrestles with his responsibility to Fatmia. Can he ask her to give up her family to go to Kabul where they know no one but could be together? Will Rasheed’s jealousy and own painful backstory fuel his loyalty to the Taliban and betrayal of his cousin  and Fatima? These questions propel the story forward.

The secondary characters in The Secret Sky round out the story. Fatima's best friend's grandmother who is teaching the girls how to read, remembers a time when women were freer and bemoans the direction of her country. The Taliban soldiers, the main characters' family members, and the priest who marries them are portrayed with in-depth accuracy.

As I listened to this audio CD I was reminded of The Good Braider, another contemporary book depicting another culture. I label both as contemporary historical fiction and recommend using them in middle and high school classrooms.

Here is a short video clip in which Abawi gives an overview of the novel:

I would like to pass along this audio CD courtesy of Recorded Books. Leave me a comment by 6 PM on January 15 and I'll enter your name. Become a new follower of this blog or share this on your social media of choice and let me know that you did, I'll put your name in the hat twice.

PLEASE leave me your email address if I don't have it. If you don't, you will be disqualified.  U.S. postal addressed only.
at January 12, 2015

As a four-time AFS host parent to high school students who live with my family for a year at a time, I am very interested in cross-cultural understanding. This book sounds fascinating. I'd love a copy of the audio-book.

You're starting the list, Glena. Maybe you'll win this time!

I'm fascinated by this book because it deals with such a timely issue, and because I don't think I have ever read a book with three points of view. I'm sharing on Twitter and would love my name to be entered in the drawing!

Thanks, Linda. You're in twice!

This does sound like a fantastic book and very in the news. This sounds like it will get a wide audience. Thanks for telling me about it. Please let someone else win, though. I am buried in books right now.

What a great audio-book. It would expand my knowledge of other cultures. I'll share it on FB too. Thanks for telling about another winning book, Carol.

Thanks Rosi and LInda for leaving comments. I understand about being buried in books, Rosi. LInda, you're in.