The League of Seven by Alan Gratz

*********
Readers of this blog are no strangers to book reviews by North Carolina author, Alan Gratz. He is well known for historical novels, like Prisoner B-3087 and Samurai Shortstop.  But he also writes contemporary books like his newly released, Code of Honor, (Scholastic, August 2015) and steampunk fantasies.

Alan’s love for creating complex worlds and populating them with characters who readers can relate to and learn from, shines through every page of this engaging book. 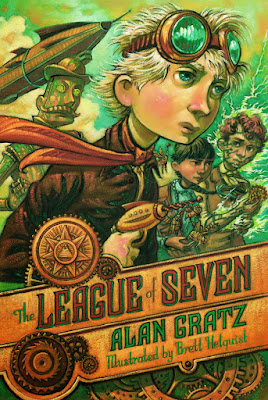 Without a word of backstory, Alan immerses the reader into this fantasy world, giving you just enough information that will make you want to keep reading.

The secret entrance to the headquarters of the Septemberist Society could only be reached by submarine. Twelve-year-old Archie Dent had been there a dozen times before and still he had no idea where it was. Manhatta? State Island? Breucklen? Queens County? For all he knew, the submarine they took to the group’s secret headquarters didn’t go to any of New Rome’s boroughs at all. It might turn right around from the Hudson River Submarine Landing in Jersey and head back to Hackensack territory. And asking didn’t help either. His mother and father didn’t know where it was, or they wouldn’t tell him.

“I’ll bet the Septemberist Society is under the big statue of Hiawatha in New Rome Harbor,” he told his parents as they wove their way through the crowd down to the submarine docks. “That would be so brass!”  (p. 1)

Introduction of protagonist with a voice. Check.

Introduction of a believable steampunk world based loosely on cities and states the reader is familiar with? Check.

Next comes the conflict: Enter the Mangleborn and their descendants, the Manglespawn. Monsters so horrific they can only be defeated by the superhuman powers of the League of Seven.

In the opening chapter Archie meets his first monster:

It was something else. Something black and shiny and big, bigger than Archie, with too many legs and too many eyes and a curled, segmented tail with a thick stinger at the end….It wasn’t a giant spider or a giant scorpion or—were those human hands under there?...Something unnatural. Something monstrous.
Something Manglespawn. (p. 20)

Archie quickly learns that his parents, along with several other members of the Septemberist council, have come under the Maglespawn’s control. His mission, set up within the first 25 pages, is to rescue his parents.

Of course not. Alan Gratz wouldn’t be the master storyteller that he is if there wasn’t also an interesting sidekick, Archie’s machine man Tik Tok servant, Mr. Rivets; as well as two other members of the new League of Seven. Archie meets Hachi, a fierce warrior with a vendetta to vindicate the death of her parents and Fergus, an electrical tinkerer with the supernatural ability to absorb and discharge lectricity. Together, the four travel up and down the east coast of the United Nations of America in a mammoth search for Archie’s parents.

The story includes great battle scenes, times when Archie is tested and uncovers huge truths about himself, and even tiny sparks of romance. But one of the things I enjoyed the most was seeing how much Alan enjoyed writing this book. I can imagine the look of glee on his face when he first imagined p-mail (messages delivered through pneumatic tubes via a series of tubes called the Inter-Net); p-mail hackers who send messages from a “Nigerian prince who needs a small sum of money transferred to him to free up a fortune in stolen diamonds… an old con [that] many people fall for.” (p. 128); and personal gramophones that are steampunk versions of iPods.

The League of Seven, first in the trilogy with the same name, won the 2015 SIBA Young Adult Award and will appeal to middle school, young adult, and boy and girl readers.  The second book in the series, The Dragon Lantern came out in June with equally fantastic illustrations by Brett Helquist.
Sorry, no giveaway this time. I’m saving my copy for my grandchildren. But you can look forward to hearing about The Dragon Lantern in a future review. Visit Alan’s website for ordering information from southern indie booksellers.

I enjoyed seeing you both at the Fall Conference.

Thanks for the post. I hadn't heard of this book, but I will definitely check it out.

Thanks LInda and Rosi for leaving comments. Rosi, your grandson would LOVE this book!!

Great Review, Carol. Alan is INDEED a MASTER STORYTELLER and you, dear friend, are an excellent reviewer.

Thanks, Sandra. As I study other author's books I learn the craft!

Great story, great review,and great disappointment (ha) that I don't have a chance to win this book. But I totally understand, Grandma!

Thanks for a great book review and highlighting what Alan is doing best, hooking us into his story world.

Thanks LInda and Vijaya. Yes, Alan is a great storyteller!