Congratulations to Myra Dunlap who won an autographed copy of AIM from last week's blog.

*****
Some books defy genres. Longbow Girl is one of them. It is well-researched historical fiction and also a meticulously crafted, time travel novel. No easy feat, but one that Linda Davies pulls off with aplomb. If you study this beautiful cover, you'll get a clue as to what this amazingly-plotted tale is about. 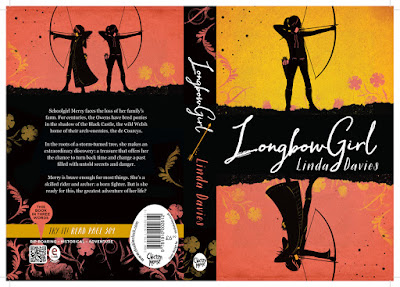 Longbow Girl, which takes place in Wales, spans twenty-one generations (or for those of you who are math-challenged like myself, 500 years.)

Fifteen-year-old Merry Owens is descended from a long line of longbow warriors. But she is unique: she is the first girl to master the bow. The opening chapters set up Merry's stubborn, smart, and loyal personality as well as her problem: unable to pay his bank debt, her father may have to sell their family land to their wealthy neighbors. This estate just happens to belong to her best friend--James DeCourcy's--parents, the Earl and Countess DeCourcy. The young people do not condone the rivalry between their families that spans generations, and instead, champion each other's dreams.

Merry will do anything to keep the land in her family. But how? Her dilemma is compounded when she finds an extremely rare and valuable copy of the Mabinogion, a collection of eleven stories collated from medieval Welsh manuscripts. While it is in her possession her life is threatened and she considers how to get rid of it to protect herself and her family.

The book speaks of a treasure near a waterfall in a riddle pool.  Risk-taker that she is, Merry follows the book's directions in order to try and find the treasure which could save her family from financial ruin. Her decision is full of high stakes danger as Merry finds a watery tunnel (later she names it the river of time) which brings her to a land that looks vaguely familiar. The land is filled with people that look like her family and the DeCourcys. Gradually, she realizes that she has traveled "500 years from home." When she discovers that her ancestor has been falsely imprisoned, she has no choice but to try and rescue him and save her family's legacy. If he dies, she reasons, she may never have been born!
This action-packed story is full of Merry's and James' gut-wrenching choices which hook the reader. Merry's survival and longbow skills are tested; James' physical prowess and ability to deceive his captors are tried; and both young people prove that their friendship can not only withstand immense challenges--but grows stronger as a result.

The novel is full of high action adventure, but Davies does not neglect to show both characters' internal struggles. Although writers are instructed to "show, not tell," Davies names feelings such as anger and relief. To be honest, that never bothered me. But there were some loose ends which I wondered about. What happens to their antagonist, the evil professor who follows Merry back through the tunnel. Does he get trapped in the time of the Tudors? Similarly, a wild stallion follows Merry into the 21st century. Why doesn't her father question his sudden appearance?

Since I listened to the audio version, this review is not as full of quotes as most of my book reviews are. But I jotted down this memorable line. Merry is facing capture and possible death and she thinks, "The 16th century was not a playground for the privileged children of the 21st."

At first, I was a little put off by Emily Wilden's Welsh accent. But fairly quickly I adjusted to her manner of speaking and when I finished listening to the performance, her voice stayed in my head for days. Ms. Wilden annunciated her words well and helped the reader form an emotional connection to the characters. Since I listen to audio books in the car, I often couldn't wait to be driving somewhere to hear what happened next to Merry or James. Listen to this excerpt and you will get a taste of Ms. Wilden's reading of Chapter 2. You will see how it adds authenticity to this Welsh tale.

This book will make a wonderful gift to a teen reader who likes fantasy--but make sure you listen to it yourself first! To enter this giveaway, leave me a comment on my blog by December 1. PLEASE leave me your email address if you are new to this blog. Continental U.S. mailing addresses only.

********
Here is the NaNoWriMo update from teen writer,  Sydney Kirsch. As of midnight on November 26 she had written 51,692 words. She said, "I've spent most of the week outlining scenes I still need to write in the middle and end of my story which has been so much fun. But I'm prepared to get it done now, and and I think my first draft will actually be complete by the end of the month!"

Next week Sydney will share more about her work and what she learned in NaNoWriMo 2016.
at November 28, 2016

Oooh, I know a teen who loves fantasy and archery. She'd love this!

This sounds intriguing and will put it on the list for later for my 8-year-old granddaughter!

Thanks LInda and Jacqueline; your names are in. But whoever wins this, you need to listen to it first before giving it away!

This sound simply terrific. I really would like to read it or listen to it. I don't usually do the audio book thing, but I am needing to learn to like them as I spend so much time in the car. Thanks for the chance.

500 years! That does sound like a major feat. I cannot imagine! Great peek inside, Carol. Thanks. And congrats to Sydney on NaNoWriMo accomplishment! WoW!

Sounds interesting. I tend to wander across genres a bit. I'd like to see one done well.

Thanks Joyce, Rosi, and Tom, for leaving comments. Yes--500 years is quite a bit of research, Joyce! And yes, Rosi- audio books are great in the car. Tom, please leave me your email address in case you win

This is a book I never would have known about except for your wonderful blog, Carol. Thank you for sharing the information about such an intriguing story.

Thanks, Bonnie. It's a great book. Working on your review and hope to get it up soon too.

Thanks for the interesting review, Carol. The does sound very intriguing.

You're in, Sarah. You would enjoy it, I'm sure!