Teaching Fiction, Using AIM as a Mentor Text, and a Giveaway!

As I mentioned two weeks ago, I recently completed teaching an eight-week class in writing fiction. I knew Joyce Hostetter's recent book, AIM, would appeal to both boys and girls and chose it as a mentor text for the class. Here are a few more reasons--from the perspective of my teen students--why you should read this book or purchase it for your favorite young reader. 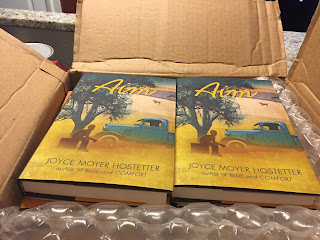 Using the worksheets linked below, we brainstormed a fictional character and put him in a setting. We thought about his internal and external goals, potential conflicts, and the various directions his story could go. The quotes from AIM are ones the students selected to demonstrate each story component.

Sydney K. chose this passage because she liked the key details which were included about Granddaddy:


Grandaddy's gray hair was flat on one side from sleeping on it. I nudged his leg with my knee. "I brung your supper."

"Thunderation! You fool. You woke me up." His eyelids slid shut again, and his mouth fell open like a trapdoor without a hook. A dried stream of tobacco snuff ran from the corner of his mouth and down onto his neck. p. 15

Alex M. commented that he was interested in how Junior's two aunts were portrayed:

"So there I was, with a piece of fudge in each hand, watching her and Aunt Lucille tiptoeing around each other. I tried to imagine them with Pop, playing together when they were all young'uns. But those two women eyeing each other didn't seem like the kind of people who could have been small and childlike once upon a time. For one thing, they are both tall. And big-boned. Right now, Aunt Lucille's face was more serious than Miss Hinkle's in the middle of a handwriting session. Lillian was smiling, but I could tell she was all pretend--just tying to buy something with that fudge of hers. p. 133-4

Students discussed how this line of dialogue from Junior's mother portrayed setting and character:


"After your granny died, Homer would sit on the neighbors' porches day in an day out, sniffing their cooking and inviting himself for dinner." p. 42

We talked about how settings need to be sensory and one of my students picked this section. It's a good example of using setting to show a character's conflicts:


I peeked through the small holly tree, and not far away was Ann Fay with Leroy. He had a finger over his lips, reminding her to be quiet. I could see they had their eyes on my squirrel!

The crunchy sound of their feet on the dry leaves took me way back, to when I was eight years old. And their white breath clouds in the cool air--it was like being there again, in the woods with Pop, learning to shoot squirrel for the first time. p. 59

"Sit down, Junior." She said it real low, but there was something in her voice that told me I better listen. Or else.

So I sat. But inside I was standing up. Inside I was marching to the back of the room and jerking that Dudley Catfish Walker up and showing him what a Democrat could do to a Republican. If he wanted a fight, I was a mind to let him have it.

Miss Hinkle tried to bring the discussion back to the economy and how, if we did got to war, we'd have to sacrifice on more luxuries here at home. That didn't help because Dudley and opinions on that too, and I spoke out and said his ideas were stupid so maybe he should just dry up, and Dudley said I was dumber than a box of rocks. p. 86


Dudley shook his head. "Just think about it," he said. "We won't be stealing because we're bringing it back. After all that woman has put us through, don't you think she owes us a little something?"

"There's nothing to think about," I said. And I meant it, too.

But after he left, I couldn't stop thinking about it. What a confounded stupid idea! I thought about it when I was doing odd jobs at the sawmill and when I was planting cotton for a farmer near the crossroads. p. 209-210

When we talked about the concept of antagonists, we considered why Dudley acted the way he did. The students readily agreed that the abuse he suffered as a child laid the groundwork for his anger and bullying.

WHAT I LEARNED FROM AIM

Selected quotes from my students:

"I learned that enemies can sometimes become friends." ~Grace W.

"Well-sketched and memorable characters don't have to be complicated. Mrs. Hostetter did a great job of portraying characters in just the right setting and characteristic dialogue; simply and effectively showing, not telling, their personalities." ~Olivia R.

"AIM taught me that people are molded into who they are by their life experiences. That each and every part of our lives makes us who we are." ~Abigail R.

"AIM gave me a great model in which to observe the elements that we studied and practiced in class.  I was able to see great examples of what the class as a whole is trying to teach us in terms of characterization, plot development, power words, writing tight, how to handle history and so forth.  Where as before I would have read the book and thought "what a nice book, interesting story."  Now I could really appreciate the craftmanship and all the work that went into making such an enjoyable story come to life.  I can really see how difficult good writing can be." -Kelila M.

"I thought AIM was a good picture to show that whatever habits we develop and tolerate now, can be passed down for generations. Junior was affected by his father who in turn, fought a lot with his mean father." - Caleb R.

For your last chance to win an autographed ARC of AIM from my blog, leave me a comment by Friday, November 25. Please leave me your email address if you are new to this blog. Share this post on social media or become a new follower and I'll enter your name twice. Make sure to tell me what you do.

Here's a favorite line: "... I just need someone who can read a map. I stumbled through the bedroom, hobbling on my good foot. And a horse. Hopping through the mountains wasn't exactly on my bucket list."

I would love an ARC of AIM but I'll buy the book anyway!

Kathy, I'll start the list with your name! I'm sure Joyce would love to autograph a copy for you!

This was so informative. I also believe as writers it makes us better critique partners to see these kinds of lessons. Thanks for sharing.

I know some grandchildren that would LOVE a copy of AIM after I read it. It would be very special to receive an autographed copy. Thanks for this opportunity.

Thanks, Gail. You're in twice too!

My daughters and I loved Blue. We would love a copy of Aim for great Christmas reading.

Thanks, Heather. You and your daughters will love AIM. Please leave me your email address in case you win!!

Wonderful post, Carol. It must have been a terrific class. Thanks for this. Please let someone else win. I have a copy of Aim and loved it as much as your students did.

Carol,
Fun exercises and lots of insights from your students. I'll share on Facebook. Hopefully, others will search out AIM too.

Thanks Rosi and LInda. It was great class and it was exciting to have them read AIM.

Carol, I love the insight that these students had about AIM! It seems that you had a wonderful, creative group of students! I'm sure they learned so much from you. These exercise ideas are fantastic!

Wish I'd been a member of your class, Carol. I had a creative writing class give me critiquing on the first 8 chapters of TERROR'S IDENTITY when I was on the 5th draft. What an insightful experience. You are a good teacher. Thanks for sharing and I'd love a copy of the book.

Thanks Sarah. I've already asked a few students to be beta readers for me! Your name is in the hat!

You are an amazing teacher and those kids are lucky to have you and Joyce's book sounds amazing as well, so I'm putting my name in the hat. Thank you.

Thanks, Vijaya. This class was a great blessing to me. The hat is filling up--but there's room for you!!

Thanks for your enlightening post! I love to read what you and Joyce write,