Tangled Lines: A Review and an Autographed Giveaway!

With the publication of TANGLED LINES (Seek, 2016), Bonnie Doerr completes her eco-mystery series that began with ISLAND STING (2010) and STAKEOUT (2012). All three middle grade books star "detectives" Kenzie Ryan and Angelo Sanchez figuring out an ecological crime that threatens their beloved Florida Keys. 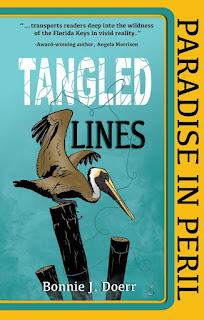 Since many of you tell me you appreciate it when I interweave book reviews with comments on craft, this review will focus on three basic elements: The Beginning, Middle, and End using materials Barbara O' Connor provided at the fall SCBWI-Carolinas regional conference.

O' Connor says that the story's setup should include:
In the first two pages of TANGLED the reader finds Kenzie gathering Florida Keys' newspapers and shoving them in the recycling bin under her stilt house. As she performs this chore, she sees a picture of a Brown Pelican.

In the photo, the pelican's pouch was raggedly sliced from its beak, hanging loose like a war-torn flag. The caption screamed Pelicans Brutally Slashed. (p. 2)

She runs inside, shoves the paper in front of her mother and says,


"This is sick." Kenzie's stomach churned. "It's inhuman. It's despicable!" .... A cinematic swirl of jagged knives, dripping blood, and murderous human eyes hijacked her brain. (p. 3)

Within a few pages Doerr has shown that Kenzie's story is set in the Florida Keys. Even without the cover and book illustrations, readers will guess that environmentally-sensitive Kenzie's new mission is to save injured pelicans. Kenzie's quick call to action sets the tone for the book.

O' Connor said that the setup should contain the catalyst (the event or action that starts the story) as well as a central question (what the problem is.) Do you see those elements in these brief snippets from TANGLED LINES? O' Connor mentioned that the setup should include relevant backstory. Doerr expertly intertwines the right amount of details from the previous two books without bogging down TANGLED.

As Kenzie tries to find out who is hurting the pelicans, she turns to her Cuban-American friend Angelo Sanchez, who helped her solve previous eco-mysteries. But they've entered high school and things have changed between them. Angelo is spending time with a different girl (Estefania) and there's another guy who Kenzie thinks about. Complications ensue!

Enter the middle of the book, which most writers agree, comprises about 50% of the story. O' Connor called this development and said it should include scenes that:


Kenzie talks to her friend Ana about Angelo's lack of figuring out who is harming the pelicans. Ana reminds Kenzie that Angelo's father's business depends on selling fish caught by local fisherman. Kenzie determined that the birds were often injured by fishermen because the birds stole their bait and snatched their catch.


"Ana, look. I get what you mean about Angelo and fisherman, but he said he wasn't interested because he had no time. I think Estefania Betancourt is the reason. Yeah, he has to work after school and weekends, but Christmas vacation starts in a week. He could make time then." (p. 75)


Angelo snoops around one of his father's fisherman's boats and finds a few suspicious items that worry him. Kenzie does a happy dance when he decides to join her on the pelican project. The story advances as the two follow clues and red herrings in their quest to figure out who is injuring the pelicans. Both Angelo and Kenzie discover parts of Angelo's past, adding more tangled lines to the story. They also begin to suspect illegal activity on one of the islands. In a flurry of excitement Kenzie reports to Angelo,

"Oh my gosh. I almost forgot to tell you. Donna at the Wildlife Center started keeping a chart of mile marker sections were injured pelicans are found. You'll never guess where they've found the most."

He was almost afraid to ask. "Where?"

"Mile markers 21-31. We're smack in the middle. There has to be a connection between abusing pelicans in Key West and abusing them around our islands. Something's going on. We have to figure it out and stop it." (p. 201)

O' Connor said that the climax of the story should:

I can't tell you how Doerr weaves together all the story lines, because I don't want to spoil this book for you. Let's just say there is high adventure on open water (including a kidnapping and an almost-concussion), Kenzie and Angelo capture the bad guy, the pelicans AND island are saved, and a sweet romance create the perfect ending.

But since this is the last book in the series, I'll share this snippet. Angelo fixes Kenzie's broken necklace and with trembling hands clasps it around her neck.

Angelo lifted the key pendant. "I'm sure glad your mom got this for you. Wish I could have bought it, though." His voice cracked. He hesitated, cleared his throat and continued. "Remember why I wanted you to have it?"

He made it sound like the right answer would be the key to solving a mystery, but a wrong answer would further complicate it. Like he was navigating uncharted waters.

Kenzie had no clue. They were in such a comfortable place with each other now. What would happen when she admitted it? She tensed and gulped, "No."

Angelo carefully released the pendant and lowered his head. "It's one of a kind." Raking his hair back with his fingers, he breathed deep and long. "Yep. One of a kind. Just like you."  (p. 375-6)

I challenge you to read TANGLED and figure out how many story lines are tangled and then untangled by the end of the book. I counted at least four. How many will you find?


For more information about Bonnie's books including curriculum resource material (she admits that the teacher in her doesn't know when to quit) and the inspiration behind each book, please visit her website.

For more information on this aspect of the writing craft see Beginnings, Middles, and Ends by Nancy Kress.

GIVEAWAY: You can enter this giveaway twice! Leave a comment today and I'll add your name to the list. Leave a comment on next week's blog when I interview Bonnie, and your name will go "in the hat" a second time. Random.org will pick a winner for this terrific classroom resource on January 12.

Happy New Year, Carol!
I'd love to win a copy of this book!

I'm not a teacher but this sounds like a very enjoyable story. Thank you for sharing!
Connie

Thanks Mary and Connie. You're both in!

Carol, I never expected dissection of my work to be so much fun! Can't thank you enough for putting me to the test. And via Barbara O'Connor's craft suggestions, no less. What an honor.

Thanks, Bonnie. Glad you liked how I reviewed your book! And of course, thanks to Barbara for letting me use her materials.

Thanks, Jillian. You're in!

Dear Carol,
Thanks for giving us snippets of Bonnie's new book along with reminders of essentials of good writing.

Dear Bonnie,
Thanks for writing a suspenseful book! It sounds exciting and heartwarming!

Thanks, Joan. Your grandkids would love this book! You're in!

This was great, Carol. Thank you for such an honor. And what a great book Bonnie has written!!

Thanks, Barbara. Glad you liked how the blog came out. You have much to share with the writing community!

Thanks for a helpful post. I've always written picture books because the idea of weaving different plot lines together terrifies me, but you demystify it.

So glad that these blog posts are helpful to you, Caroline. I learn the material all over again when I share it with others. YOu're in the giveaway!

Sounds interesting! I read book one, but not the second, so it looks like I've got some catching up to do!

Yes you do, Gretchen! Thanks for leaving a comment.

Congratulations on completing the series, Bonnie. Great review and writing lesson all in one, Carol. Thanks! Like Gretchen, I read the first book. More to go.

Fantastic review and I really like the way you combined it with a writing lesson. Bonnie's books are now on my list as a must read! Thank you!

Thanks LInda and Deb, for your comments. Glad you enjoyed the writing lesson and review. You'll enjoy Bonnie's books!

Your review of Tangled Lines is wonderful. I can't wait to read it.

Thanks, Sandra. You're in!

Thanks, Carol. Another useful post. Please let someone else win. I am buried in books.

"Buried in books." I understand the feeling, Rosi!