As promised last week, here is the follow-up interview with Bonnie Doerr, author of three eco-novels for middle grade students.

CAROL: When you wrote Island Sting, did you have any idea that there would be two more books?

BONNIE: Island Sting is a rework of Kenzie’s Key. The publisher of Kenzie's Key went out of business, but the original editor had envisioned an entire series. When the miracle of a new publisher picking up KK and tweaking occurred, I wasn’t sure what to expect, but I hoped at least two more books would be born. The only thing I had going for me was the right of first refusal. There’s much more to this publishing tale. It involves the publisher that picked up KK going away, an editor sticking with Island Sting, and then Stakeout through a new company, then that publishing company being sold and... Oh enough already, this just gets boring, doesn’t it? But, yes, I always had an idea of at least three books, though the featured animals and wildlife organizations were not always so obvious to me. So, imagine the joy when I held the third, Tangled Lines, in my hand!

CAROL: What's next? A fourth Kenzie and Angelo book?

BONNIE: As for another book, it will not be an additional Kenzie and Angelo story. Their story arc is complete. The story keeping me awake these days features a new locale with new characters who battle a different kind of environmental injustice.

CAROL: I can relate to a story keeping you up at night! Do you hear from teachers who are using your books in their classrooms?

BONNIE: Teachers are using my books, but few know about them because they are not published by one of the big five houses. Word is spreading, however. I was invited to participate in an environmental program at a NC coastal science center after a PTA purchased copies of Stakeout for an entire sixth grade class, and a high school librarian near Tampa, Florida, received funding to purchase classroom sets of all three books for her ninth graders and to host my visit next February. Bookmarks literary organization has been incredibly supportive of my work sponsoring many school visits through their Authors in Schools program. Each visit resulted in wider classroom usage of the books.

Most often a book is used to introduce the topic of endangered animals or, surprisingly, in sixth grades they’ve been discussed as a way to introduce research in writing units; a unique way to show how fiction requires research as well as nonfiction. More teachers are also finding them useful to support nature and conservation activities. Recently, at the YALSA Symposium in Pittsburgh, librarians were initially drawn to my books because they were described as contemporary, realistic literature that empowered teens. But upon learning more about the books, some also saw them as filling the niche of “hard to find” nature fiction for younger YA readers.

During school visits, teachers always seem interested in resources I’ve created for them on my website, but I honestly haven’t heard directly from anyone who’s used them. There’s little time for teachers to search out new ideas and less time to think of responding to an author about a particular lesson. It’s been interesting, though, to occasionally see one of my lessons on specific skill Internet resource pages, so educators must pick up one or two activities from time to time. Tangled Lines' project guide only recently available on my website is too new for any kind of response, so I have yet to get feedback on that.

CAROL: I'm glad to hear that some teachers are finding your books. But now is the $64,000 question...How many story lines ARE in Tangled?

BONNIE: I stopped counting at ten.

CAROL: Which shows you chose a perfect title. 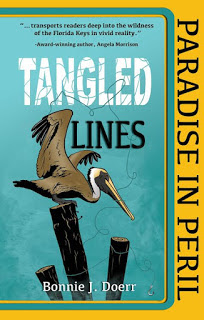 GIVEAWAY: Leave me a comment by Thursday, January 12 to enter the giveaway for an autographed copy of TANGLED. If you commented last week, you can add another entry to the hat! PLEASE leave your email address if I don't have it.

Bonnie reading a portion from Stakeout.
at January 09, 2017

The drama of publishing is probably equalled only by that of the film industry. Glad to see that Bonnie's novels found a new publisher! They sound quite interesting, something to read along with Hiaasen's Flush, Chomp, Hoot, and Scat. Great interview!

Thanks for your second comment, Jilanne. Yes, that's a good comparison with Hiassen's books!

This sounds perfect for students AND avid readers!
Thanks for sharing Bonnie's interview and for another chance to win!
Blessings!
Connie
cps1950(at)gmail(dot)com

Thanks for another interesting interview. Again, please let me pass on the drawing. Still buried. Happy New Year.

Thanks, Rosi. I understand!

Great interview! I love hearing peoples' publication stories. The business of publishing a books is so complicated and tangled, but I'm glad Bonnie has stuck with it and succeeded. She is an inspiration.

Thanks, Caroline. Another example of tangled story lines-how books eventually get published!

Caroline, your comment on the business of publishing is spot on. It's as tangled as the plot lines in Tangled Lines. Holy Mole! I'd never thought of it like that before. I'd never have stuck with it without friends and editors who believed in my work. But those occasional readers you hear from - well they make navigating the jungle worthwhile.

Jilanne, you're right about the comparison to Hiaasen. In truth, Carl was one of two major inspirations for me. (Mary Alice Monroe was the other.) As a point of interest, Hoot was released the same year as my first book.