Congratulations to Connie Saunders for winning REFUGEE. I haven't added it up, but I believe Connie gets the prize for winning the most books off my blog. Her secret? She always shares my posts on Twitter!

I love finding a book which make a setting so real to me that I look it up on a map. Couple that with a Southern young woman who impacted history and a book written with captivating, beautiful language, and I’m hooked. (Caveat: I listened to this as an audio book courtesy of Blackstone Audio so quotations might not be 100% accurate.) 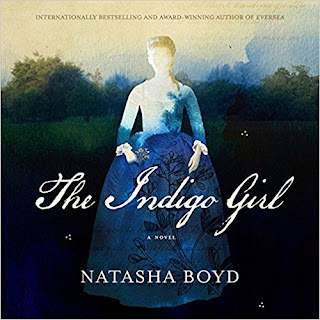 INDIGO GIRL by Natasha Boyd is the story of 16-year-old Eliza Lucas, who lived outside of Charles Town (Charleston), SC in 1739. A British subject, she spent her formative years in Antigua where her father was governor. He moved his family to South Carolina only to decide that he needed to return to Antigua to ensure his political career. With her older brother studying in England, Eliza’s father turns over the responsibility of running the planation to Eliza.

Eliza is smart, unconventional, and botanical. During a time when young women were groomed for marriage and nothing else, Eliza refuses to be boxed into conventional expectations. Despite her mother’s disapproval and the ridicule of her father’s overseer and neighboring planters, Eliza is determined to not allow her father’s debts to ruin their family.

As the manager of her father’s three tracts of land, Eliza is also in charge of their slaves. Eliza is predisposed not to treat them harshly but her understanding of their situation matures. Early in the book she thanks Quash, the black man who oversees the slaves. Then she thinks, “It's odd to be thanking someone who has no choice."

She dreams of being able to afford to pay her workers rather than be dependent on enslaved workers. This radical thought comes when a suitor confesses he wants to enslave Native Americans to work for him; she realizes he could never be her life companion. She feels small and powerless when her closest friend says Negroes are uneducated savages.

Her best friend in Antigua was a Negro named Ben. She taught him how to read and he passed along a love for plants that he learned from his grandmother. When Eliza decides that the plantation needs a cash crop to keep the family afloat, she picks indigo, a plant she saw in Antigua. But growing, harvesting, and converting indigo into a dye is a complicated process that no other coastal South Carolina planter has had success with. Eliza’s first crops fail and she desperately needs help. She knows Ben has the expertise she needs, but how is she going to find him?

Her father sends her a man to help her and to her shock and surprise, the man brings Ben too. Now a grown man with the promise of freedom dangling over his head, Ben remains aloof from Eliza. She’s crushed, confused, and stuck between childhood and womanhood. She wants to run back to be a child with her best friend. But she can’t. He is an educated slave who longs to be free.

Ben challenges her in ways no one else can. “Why have you not taught your slaves to read and write?”  “Why do you want indigo?” She’s angered at the blurring between master and slave and then realizes that if her indigo is successful it will be because of Ben’s knowledge. She’ll get rich but he’ll get nothing—not even his longed for freedom. Along the way Eliza learns of The Negro Act but faced with Ben’s challenge, she decides to teach the slave children how to read the Bible—something even her mother can’t object to.

Eliza’s dilemmas drive the book. By managing her father’s estate, she is seen as not very marriage-able. Without a husband, she feels as if she is chattel like her slaves. She bemoans her rashness when she speaks her mind to men--like to her father’s employee who tells her she is too intelligent to be a woman. Yet her need to ensure the indigo’s success to secure her family’s financial future and be a source of revenue for her if she never marries--as well as the nation’s need for a stable export--propels her forward.

A comprehensive author’s note shows the author’s inspiration for this well-researched book, including what was fact and what was fiction. Boyd’s desire to bring this forgotten pre-revolutionary figure to light is admirable and makes this a great book for both teens and adults. Beautifully narrated by Saskia Maaleveld, this audio book will captivate your imagination and keep you company for many hours.

Leave me a comment by October 5 for a chance to win this audio book. Share this on social media or start following my blog and I'll put your name in twice--just make sure you tell me what you do or tag me. You can find me on Twitter here, and on Facebook here. PLEASE leave your email address if I don't have it!

Celebrate Indigo Girl's book birthday tomorrow by meeting Natasha at Fiction Addiction in Greenville, SC on October 5. Check out Natasha's schedule for a signing near you--including Charlotte, Savannah, and Charleston.

And one last tidbit: Natasha writes about the compulsion she felt to write Indigo Girl here.

Desr Carol,
Wow! What a predicament Indigo Girl has to cope with. Thanks for sharing.

You're first in, Joan. This is not only a great read, but great example of raising the stakes!

That is good writing when the author raises the stakes!

I’m intrigued by Indigo Girl, Carol. I’m going to add this book to my list to read, but don’t put me in for the giveaway for the audio cd. Thanks for sharing!

You'll love this book, Clara. The stakes keep getting bigger and bigger. So well written.

Thanks for reviewing this intriguing story, Carol. Who wouldn't be drawn in by Indigo Girl's fortitude and spunk? Putting it on my list.

You will love this book, LInda! Your name is in the hat.

This sounds like a really intriguing story. Thanks for telling me about it. I'll pass on the giveaway. I am just buried.

thanks, Rosi. I understand the feeling!