The Wizard's Daughter: A Book Review and Autographed Giveaway

Congratulations to Danielle H. for winning The Smallest Tadpole's War in the Land of Mysterious Waters.

********
If you, or a teenager you know, is a fan of clean science fiction/fantasy, then The Wizard’s Daughter by Jeff Minerd, is a book you should consider. 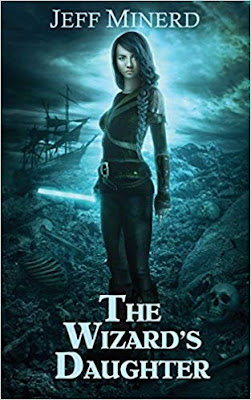 Minerd sets his three-book series, The Sky-Riders of Etherium in a world that is futuristic and yet also includes medieval/steam punk elements. The story opens with Brieze, the teenage protagonist, watching her mother jump off the edge of their floating island and into space. Brieze straps on her parachute pack and rescues her from impending death. In the process, Brieze learns that the man they are living with, the Wizard, has proposed to her mother. But, Patentia, can’t let go of the idea that Brieze’s father—her first love—still loves her and will come back for her.

With that, Brieze is thrust into a new normal and into her quest: to find her biological father, Kaishou Fujiwara, and to demand an explanation for why he abandoned her mother. She knows her journey to the Eastern Kingdoms will be fraught with dangers, but she is determined to not let anything stop her.

The reader meets the other point-of-view character, Tak, a warrior in his own right and Brieze’s romantic interest. (He is the star of the first book in the series, The Sailweaver's Son.) Tak tries to talk Brieze into allowing him to accompany her, but she refuses—a decision she regrets during the long and lonely flight.

The wizard, her adopted father, gives her a great surprise when he provides the airship she will need for her journey. Painted with a new pigment, the ship takes on the color of its environment. Delighted with the camouflage, Brieze names her airship, Devious. As a sky rider, Brieze “craved the weightless freedom of flying.” This powerful urge, along with Tak’s flying lessons, and her desire to confront her father propel her into a perilous journey and unknown future.

Minerd's world-building is admirable. I'm quite sure that I could never imagine the complexity of the worlds, strange creatures, and dangers which Brieze encounters. Here is an example that shows some of the world that Brieze navigates in search of clues about her father's disappearance.


She looked over the ledge. The clouds that covered the roots of the Wind's Teeth [dangerous, sharp mountains in which she had almost crashed] were only a few yards below her, looking like gray mist. She used the sturdy rope with the knots to lower the pack over the ledge, foot-by-foot down through the mist, toward the unseen ground below....

The glowing light stick on the pack dimmed as it descended through the fog....

When she planted both feet on the ground, they sank in a little, as they would in mud. Brieze took a few cautious steps. The ground supported her, but it was definitely soft. She hadn't expected that. She bent down and scooped up a handful of the whitish-colored stuff she was walking on. It was like dirt, but much finer and dryer. It flowed like water between her fingers...

"Liquid dirt," she said to herself. "Fascinating."

[That night at her campfire] Sand slithered and hissed as the wind pushed it about.

Something moved in the darkness. She heard scrabbling sounds and the faint clink of metal on metal. Sniffing. Lips smacking and chewing. Satisfied grunts. Something was eating the goat strips she'd scattered in the dark...She saw the gleam of their eyes as they drew closer to the fire. Big, bulbous eyes, spaced far apart and glimmering green with the light reflecting off their retinas. There were two pairs of eyes and strangely, a single eye bobbing and blinking all by itself.

I referred to the map in front of the book several times; it helped me picture where Brieze was traveling. The prologue and epilogue were slightly confusing. Both reference characters and dragons that are not shown in the book. I assume they are important to the series, but I would have liked to see how they factor into The Wizard's Daughter.  In addition, I was left hanging at the end of the book. I assume that is because the author wants the reader to read the final book which he is working on, The Dragonlord's Apprentice. I would have preferred a greater sense of completion of this particular story.

If you are interested in receiving an autographed copy of The Wizard's Daughter, please leave a comment with your email address if you are new to my blog. Giveaway ends March 7.

Thanks, Keturah. I'll start the list with your name!

You're in Connie, thanks.

I'm definitely interested. Thank you for the chance! dhammelef(at)gmail(dot)com

Nice to hear from you again, Danielle. You'll have to let me know how you found my blog!

Carol, thanks for sharing this review. This is not the genre I normally read, but I'm always so impressed and have such respect for authors of science fiction/fantasy like Minerd who can imagine and describe (in vivid detail) these other worlds and creatures!

Thanks for leaving a comment, Kathleen. this isn't a genre I normally read either, but you would enjoy this book. Your name is in the proverbial hat!

Thanks for the review. I will pass on the drawing. Not quite my cup of tea.