The Smallest Tadpole's War in the Land of Mysterious Waters: An Audio Book Review and Giveaway

Florida became a state in 1845 and was quickly thrust into the Civil War. The Smallest Tadpole’s War in the Land of Mysterious Waters bridges the years from 1843  to 1900. The main character, Thomas Franklin Swearingen, was author Diane Swearingen’s husband’s great-great-grandfather.

Thomas Swearingen, an uneducated farmer who settled northern Florida when it was home to untamed forests, black bear, Seminole ponies, and biting insects, went on to become a legislator, a drafter of the Florida constitution, and president pro-temp of the Florida senate. This is his story—and the story of Florida’s early years as a state.


The Smallest Tadpole is told from the perspective of Henry, Thomas’s adopted son. Henry recounts that his favorite book as a child was Thomas’s diary.  Although Diane Swearingen fabricated Thomas’s diary and letters, she used county and military records as well as Thomas’s papers that now reside in the Florida State archives.  Historical accuracy permeates each diary entry and the entire book.

Thomas left Georgia and settled in Wakulla County, Florida in the late 1840's. In 1855 when his best friend died, Thomas married his widow, Louise, and adopted Henry. In 1860, at the age of eleven, Henry became a man when Thomas left for the war. His boyhood days of fishing with Thomas in the Gulf of Mexico and camping out staring at the stars, were over. 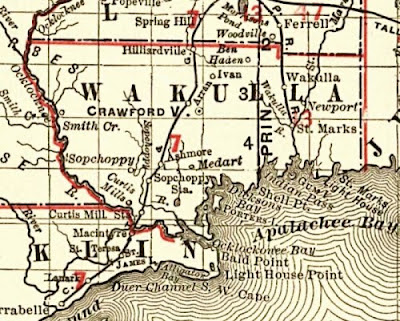 Henry remembers how Thomas, a prosperous businessman, had been invited to political rallies before the war. The local cotton farmers agreed that they shouldn't be taxed by the north. Although Thomas had been warned that slavery would remain in the South as long as it was a colony to the North, it was the unspoken issue at these rallies where secession was a huge topic. Although most of the farmers did not own slaves, (Florida's population was 140,000 in 1861; 63,000 were African Americans), wealthy cotton plantation owners held the purse strings and great political influence over the farmers. To speak against them was financial suicide. The political rallies became enlistment opportunities for the Confederate Army; the farmers were loyal to a way of life and to local economics rather than defenders of slavery.

Thomas was made a lieutenant in the Wakulla Guard because of his leadership and popularity in the county--not because of any prior military experience. (This verified the experience of Kate Dinsmore's great-grandfather. As the protagonist in Half Truths, I researched how her great-grandfather would have been made captain in Charlotte, NC under similar circumstances.)  With great pomp and ceremony, the Florida men left for war with families excited about the $100.00/month the soldiers would receive.

But the reality of war set in quickly with women left alone to care for their farms and children, while news of injuries and deaths trickled in from the front. Thomas's letters reported the realities of war and Swearingen's portrayal does not hold back from describing the smell of death, ears that ran from cannon fire, and the screams of dying men. It put faces on the 16,000 Florida soldiers who never returned home.

Henry's narrative of the war is sprinkled throughout with local stories of Wakulla County and his own enlistment prior to the war ending. There was not enough black cloth for all the widows to sew funeral attire. Carpetbaggers grabbed land because of taxes owed. The homeless and helpless were throughout the countryside.

Although Thomas returned home injured, he was encouraged to run as the Florida representative of Wakulla County and from there held several political offices. Throughout his career Thomas was anti-slavery.

This audio version available through Audible, is expertly narrated by Jim Seybert.

Thanks to Jim Seybert's generosity, I will provide a code for the winner to download this book from Audible's website. To enter, please leave me a comment by February 28 along with your email address if you are new to my blog.

I must admit that the title was misleading to me. I was thinking of a children's book for my granddaughter but instead, a book that I would love because of its historical detail. Thanks for sharing your review and giveaway.
Blessings!
Connie Saunders
cps1950(at)gmail(dot)com

I think this book will be fun to listen to and then share with my family too. dhammelef(at)yahoo(dot)com

Thanks Connie and Danielle. I'll start the giveaway list with your names!

I love history and this sounds like a great read/listen. Carol, we’ve discussed how my grandparents and great grandparents have lived through some interesting events in their lives and I often wonder about the impact on their everyday lives and choices they made.

You would love this book, Jo Lynn! Your name is on the list. Maybe it'll inspire you!

Fascinating. Thanks for telling me about it. I will pass on the giveaway since I recently won.

My kind of book! I love learning history through personal stories.

Yes, Gretchen-- it is your kind of book!! Your name is in.

My husband and I are hooked on audiobooks as well as history. This sounds like an interesting read/listen.

You both would enjoy this, Sandra!