American Road Trip: A YA Audio Book Review and Giveaway

Congratulations to Danielle Hammelef who won BREAD FOR WORDS from last week's blog. A word to all of those who also want to win books. Sometimes I run "specials." If you share my post on social media, you'll earn extra chances. That's why Danielle's library is growing. Look for these specials so yours can too!

I'm trying to figure out a good lead-in sentence for American Road Trip by Patrick Flores-Scott. But all I can think to say is, "This is a very good book that young adults should read." Totally unoriginal and unimaginative, but there's my opinion in a nutshell. I listened to this audio book, courtesy of Recorded Books. The narrator, Luis Moreno, portrayed the character's voices authentically. Don't believe me? Listen to this audio clip. 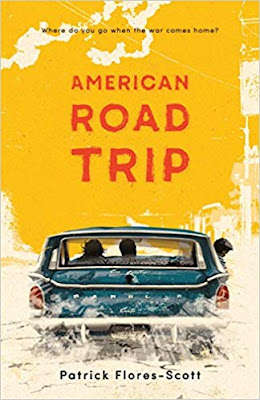 
Teodora ("T") Avila's family is falling apart. Ever since his oldest brother, Manuel, left for the Iraq War, (with his father's blessing, but not his mother's) nothing has been right. His parents lose their jobs and only his mother finds another one. Teodora's older sister Xochitl (pronounced Soe-cheel and nicknamed Xoch) is a fantastic singer who wants to hold their family together. Each family member thinks that when Manny comes back, everything will be better.

But, Manny comes home and it is clear that his presence is not the family medicine everyone hoped for. In fact, he has PTSD, refuses treatment, and turns to drugs and alcohol. T's life is miserable and he's close to flunking out his junior year. When he sees an old friend, Wendy, at the University of Washington ("U-Dub"), he tries to impress her by saying he plans to attend there.

Their budding romance (mostly through texts) inspires T to hit the books. He is accepted into the AVID program, and gets a job to pay for tutoring. But when Manny punches through a wall into T's bedroom, T escapes to his friend's house. "I'm done hoping for us, but not for me."

Xoch comes up with a plan. Under the pretense of helping Manny reconnect to good memories, she drives her brothers to see their maternal grandmother. Except T doesn't realize this is the beginning of a long road trip. Manny has his ups and downs, Xoch's old car breaks down several time, and T is furious that his summer plans to prepare for his senior year are ruined. The theme of lying to protect oneself or to get help for someone you love permeates the book.

Along the way, T learns family history that sheds light on his parents, sees Wendy and sparks fly, goes to a funeral for a distant cousin, hears of Manny's suicide attempt, and realizes how messed-up his brother is--and how he truly needs to help him.

Their road trip ends at Tio Ed's green chile farm in New Mexico. Tio Ed, a Vietnam veteran, understands what Manny is going through and gets him help from the VA and support from other local veterans.

Wendy ends up at the farm as T's tutor. Although there is clear sexual attraction, they discuss the slippery slope of sex and agree to be intentional; T follows through on his promise to "be a gentleman." They burn off sexual tension building a chile stand together and T discovers a passion for architecture.

Readers may object to T's occasional offensive language and the references to sex. I was impressed by their mutual decision to exercise restraint and wish other young adult books would follow this example.

The whole time he and Wendy are together, T fights his fear of failing and showing his "stupid self" to Wendy. When she does find out he lied to her back at U-Dub, he has a price to pay.

It turns out that everyone has a price to pay. Manny paid a enormous price in Iraq. Xoch decides to make a huge sacrifice for their family which inspires T to make a difficult decision. Although T’s transformation is most obvious, each member of the Avula family has a journey of their own. Who is the hero or heroine? Read the story and decide for yourself.

Leave me a comment by February 8 if you're interested in entering this giveaway. Remember! Leave me your email address if you are new to my blog.

Thanks for this review, Carol. I'm currently involved in developing a ministry to veterans with PTSD at our church. I will love to listen to this book!

This is a powerful book, Linda. You would love it and your name starts the list.

I haven't read or listened to any book with a character suffering from PTSD. I'm with you on non-married couples restraining from sex and am happy to have found a book in which the author doesn't just let the characters be sexually active--very refreshing. This sounds so emotional and I know I will see the world differently after this book and I always appreciate when an author can do this for me.

This story sounds really good & one I'm sure I'll enjoy. Thanks for the giveaway!
turtle6422 at gmail dot com

Thanks Danielle and Jana Leah. I think you both would enjoy this book.

Wow. There sure is a LOT going on in this book. Sounds very interesting. I will pass on the giveaway. Thanks for the review.