THE CURSE OF THE MUMMY: UNCOVERING TUTANKHAMUN'S TOMB

If you're like me and think that middle grade books are some of the best books available and if you like reading about history and ancient mysteries--then Candace Fleming's newest book, THE CURSE OF THE MUMMY (Scholastic, 2021) is for you--or for a young reader in your life. 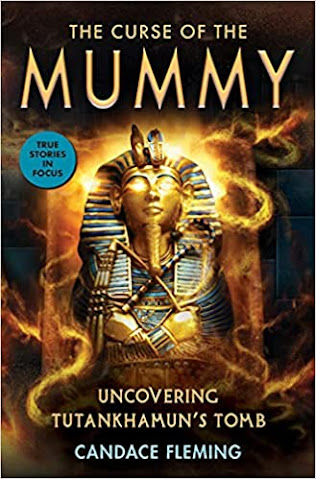 What reader can resist this opening that is printed in white on a black page:

"It was said...the boy king's tomb was cursed."

Those ominous words are followed by six curses associated with opening the tomb of Tutankhamun.

What kind of book is this?

Quickly, Candace Fleming shows you exactly what this well-researched book is: an exploration of how ancient Egyptians buried their kings and the ten years that it took to discover and clear out the tomb. From embalming procedures to the innumerable possessions that the deceased would need in the after life, to Carter's meticulous documentation, Fleming included details about it all.

But don't get me wrong. This is not my boring junior high textbook with lists of dates and facts to be memorized for a test. The Curse of the Mummy reads like a mystery as the reader is lured into wanting to know, "Who were the tomb robbers who carried off golden jewelry, jars of perfume, figurines, mummies, and other priceless treasures?" "Did they ever get caught?" "Were they scared of the mummy's curse?"

In 1906, 50 years after the Antiquities Service was created, an Englishman named Lord Carnarvon invested huge amounts of money to excavate portions of the Valley of the Kings. The evening after his first "real find"--a mummified cat--Carnarvon witnessed domestic chaos as his staff were convinced that the spirit of the dead cat had come back to haunt him. In the second "It was said..." section the reader may get goosebumps wondering along with Carnarvon, "If a cat could do this, imagine what the spirit of an angry pharaoh might do." 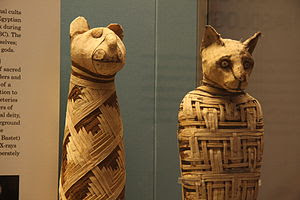 Egyptian mummies of animals in the British Museum.

Throughout the book, details about the excavation are interspersed with black pages (all written in white ink) that begin with "It was said..."  These pages tell stories about the curses (and rumors of curses) that were popular during the time period of the preceding chapters.

"Why did people get sick and die soon after they were near the pyramids?" "Why were some people tormented with Egyptian visions after looking inside the tomb's lid?"

Questions like these propel the reader through the book.

Using wonderfully descriptive language, Fleming allows readers to hear conversations between Carnarvon and Howard Carter, the now-famous archeologist who found King Tutankhamun's tomb and catalogued every item in it.  We can smell the scent of oils and perfumes that still lingered in the air inside the tomb and feel the incredible amazement when Carter and his team looked upon treasures that had been buried for over 3,000 years. 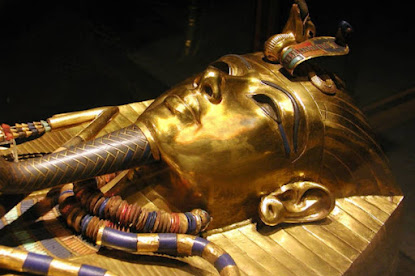 I follow several writing blogs and heard about The Curse of the Mummy on the Mixed-Up Files of Middle Grade Authors. After reading about Candace's visit to King Tutankhamun's tomb and the description of the book, I was hooked! 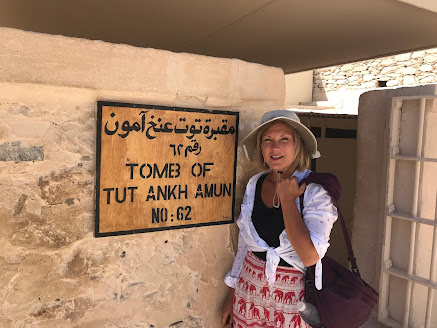 In addition to her comprehensive chronology of the excavation itself and the cultural context of archeological digs in Egypt, I was interested in Fleming's opinions about how these ancient artifacts were plundered. First, by grave robbers; second by European treasure hunters who carted away invaluable objects as small as jewelry and as large as monuments--to be sold or placed in museums. And then thirdly, by Carter himself.

This is her description of November 11, 1925 when Carter and his team unwrapped the mummy:

No one present seemed to care that removing the mummy's bandages meant permanently destroying it. No one seemed concerned that ruling through the boy king's human remains was indecent or a sacrilege. Even Carter, who took great care in conserving the tomb's objects, saw no reason why the mummy shouldn't be unwrapped. (p. 198)

So, what about the curses? Was Carter cursed as a result of opening the tomb and the way in which he handled King Tutankhamun's remains?

Of course, they weren't true. But, the superstition and myths surrounding finding the child-king make for a good story. And, there's a lot of lessons to be learned in this fast-paced book.

No giveaway this time; I'm saving this book for my granddaughter who at six-years-old has begun learning about ancient Egypt!

Congratulations to Danielle Hammelef who added another book to her picture book collection by winning LET'S POP, POP POPCORN from last week's blog.

Now, That is a back story to behold! thank you, Terri

You're welcome, Terri. It's a super book.

Egypt is fascinating and this book sounds wonderfully researched and written. Thank you for featuring it today!

YOU're welcome, Danielle. I hope you read this book!

I LOVE Candace Fleming's books. Her book on Lindbergh was amazing. I tried to get a review copy of this but missed out. I'm going to have to get my hands on a copy. It looks so good. Thanks for sharing your thoughts.