Nine curious children who grew up to become scientists. Nine adults who discovered new products, new species, and new ideas. These nine individuals are the backbone of Heather Montgomery's latest book, What's In Your Pocket?  (Charlesbridge, 2021). Illustrated by Maribel Lechuga, this STEM book will be an asset to any K-3 classroom.

When you explore the great outdoors and find something strange and wonderful, do you put it in your pocket?

Scientists collect specimens so they can observe the details of natural artifacts.

Immediately, young readers will be drawn into the opening pages of this book. The young girl who is pictured on the cover, is seen stooping down, examining a rock, and then pocketing it.

As she walks off, the reader turns the page and sees a field where young George is examining a seedpod.  He must have put it in his pocket because, 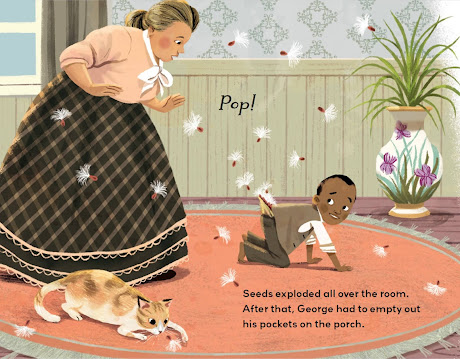 The section ends with a repeated refrain,

Nobody knew that George would grow up to be the famous scientist George Washington Carver....He discovered almost three hundred new uses for the peanut including soap, glue, and fuel...

In this charming way, children are also introduced to William Beebe who held eggs in his mouth while climbing down a tree... and became the first person to see glowing fish and other deep-sea animals alive in their habitat; to Valerie Jane who put wiggly worms under her pillow...and became the famous primatologist, Jane Goodall. 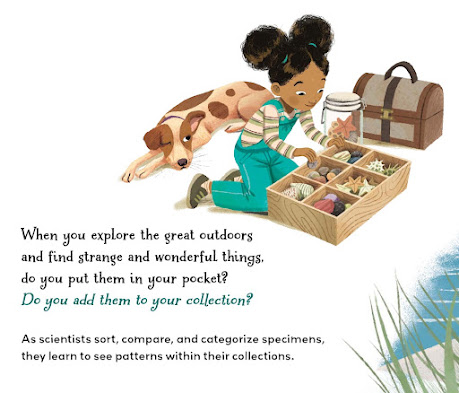 I enjoyed the juxtaposition of the little girl "narrator" as she explores and collects elements from nature, and the nine mini-biographies of scientists who loved the outdoors as children. The text is very child-friendly and I can practically hear Heather Montgomery speaking directly to the reader!
The last two pages are a wonderful spread of the animals seen in the book along with the little girl marveling at one of her discoveries. The text reads:

Throughout history, kids have found all
kinds of strange and wonderful things.
They've created collections.
They've made discoveries.
They've changed the world of science.
Every discovery started with just one thing.
One little thing that could fit in a pocket.
What's in your pocket?

Can't you just picture children checking what's inside their pockets after that last line?
BACK MATTER
I'm a back matter junkie and What's In Your Pocket is an example of one of the best. Four and a half pages are filled with "More About These (Grown-Up) Kids. One and a half pages are delightful notes from the illustrator and author. Readers hear about how nature inspired both Maribel Lechuga and Heather Montgomery and how they researched this book. (Artists and writers: Get ready to be impressed!) I particularly like how Heather included that she respects nature, that she respects the people she lives with by "making sure my artifacts are clean and (mostly) stink-free, and she respects herself. "I don't put my hands where my eyes can't see (like under a rock or log). Field guides and a bibliography complete the book.
AUTHOR INTERVIEW
CAROL: This is a longer picture book than most.  How did you and Charlesbridge determine the length? ​
HEATHER: Originally, I paced this manuscript to be 32 pages; fortunately, in an early discussion about the project, editor Alyssa Pusey suggested expanding it to 40 pages. At that point in 2018, she was looking for longer picture books. I was delighted. It allowed two full spreads for most of the scientists, gave extra space for backmatter, and made room for more of that luscious art.
CAROL: Closely tied to that first question—how did you pick which scientists to focus on? Were there others you wanted to feature who didn’t make it into the book?
​HEATHER: Finding just the right stories was the challenge. Researching full biographies, I developed a list of scientists and stories. But those biographies did not showcase enough diversity. I crossed names off my list to make room for others. And that required some creative research (like a Google survey sent to scientists around the world). Not only that, but the anecdotes had to convey the right mix of sweetness and skills. It took careful selection and sequencing to illustrate skill-building.
CAROL: I love the structure of the book where you show the scientist as a child and then the reader turns the page and finds out who they became as an adult. Did you indicate that was how you conceived the book when you submitted the manuscript?
​HEATHER: The pause of the page turn can be so powerful. From early on in this project I wanted to make use of the page turn to let readers predict what kind of scientist the young collector might become. It's like an entire biography condensed into two spreads. When I submitted my draft, I used numbers in brackets (i.e. [Page 4-5]) to suggest where page turns might fall. Not every editor wants that, so research before you submit!
GIVEAWAY
Leave a comment by Saturday, October 16 at 6 PM to enter the giveaway. For an extra chance, start following my blog and let me know that you did. U.S. postal addresses only. IF YOU ARE NEW TO MY BLOG, PLEASE LEAVE YOUR EMAIL ADDRESS!

What an amazing book. I love watching my grandchildren discover little stones, shells, and leaves. And they all end up in pockets. My one complaint is the lack of pockets on so many clothes for "grown-up" people. Another great find, Carol!

So lovely! What a wonderful and relatable concept. I see this in my daughter still and she is about to turn 14!

Lois, I totally agree about the "grown-up" clothes and refuse to buy pants that don't have pockets!

Carol, thank you for the lovely review!

I know what you mean, Rob. Thanks for leaving me a comment.

You're welcome, Heather. My pleasure!

I love Heather's books! Thanks for the great interview and giveaway!

Thank you Melissa. What is your email address?

Heather Montgomery is a master with words and hooking kids. This book will bring joy to collectors and scientists everywhere.

I love that this author had the idea of making a kid narrator to compliment the scientists featured first as kids themselves--I know so many readers will see themselves inside this book. I also very much enjoyed how the author purposefully searched for diverse scientists. I always was putting rocks, shells, pinecones (I'm sure my mom loved the sticky sap) and more into my pockets. Excellent post today!

Thanks Danielle and Joyce. It is a book that will resonate with kids and adults. Joyce, I need your email address to include your name in the giveaway!

It is as relatable an idea as it is well executed! I love the structure that reflects the process of collecting from where to put them to what to do with them then to look at what they found as a whole. There is also the second child-to-adult structure that reinforces the bigger theme of following your childhood interests to adulthood that makes our kid readers feel good about what they like to collect now and what that can mean for them. The fact that the cover and the selection of scientists both reflect a diverse cast is also great and needed! This is a special one to type up and dissect the same way Heather Montgomery, my wise teacher, taught me to do!

Thrilled to see this book as MY pockets are always filled and so hoping to share with my grandchildren, two who live in the Sonoran desert and three in DC on Capitol Hill. We always find pocket treasures no matter where we are. New to your blog too! Authorbarbaragowan@gmail.com.

This is SUCH a fabulous concept for a picture book. Just genius!

I look forward to reading yet another outstanding book by Heather Montgomery. How wonderful the Alyssa Pusey believed in creating WHAT'S IN YOUR POCKET? as a 40 page picture book along with 4 and a half pages of back matter.

I am new to your blog, Carol. Thank you for sharing the love of literacy. I will follow your blog.

Welcome o my blog, Suzy! Thanks for leaving a comment and for joining me here!

Thanks Katy--you're absolutely right! And welcome Barbara--Glad to have you join my blog readers!

What a fun peek at this book, which I can't wait to read. Heather has such a great way of speaking directly to kids and sharing her passion for science with them. (You don't need to put me in the giveaway.) Thanks for sharing this, both of you!

Thank you for stopping by Laura! I agree, Heather speaks so directly to kids!

Oh, my, this looks like such a good book! I always had rocks and leaves and such in my pockets when I was a kid. Yes, I'm sure a lot of scientists filled their pockets as youngsters. Thanks for an interesting interview and for telling me about this book. I really want to read it.

Heather hit another home run! Ive loved all of her books, and more important there are so many kids who do as well.

So fun to read all of your comments! Carol has created quite a community here. Happy reading (and book analyzing) everyone!

Such a clever format for a picture book about scientific discovery! Can’t wait to read this one!

This book looks great. And it's illustrated my Maribel Lechuga! She did such a great job with Ten Beautiful Things. It sounds like they gave her a lot of space here to make some great art. Looking forward to seeing it!

Heather Montgomery is one of my favorite writers and this may prove to be my favorite of her books. It sounds perfectly delightful. I cannot wait to share it with young children! So glad I discovered this blog, Carol. I just subscribed and look forward to future posts.

Thank you Carmela for your comment and for subscribing to my blog!

Thank you, Matt. I need your email address to enter your name!

Thanks Lori. Can you leave me your email address please?

Albus, I need your email address to enter your name. Thanks for commenting!

Very intriguing book. I think my granddaughter would love it.

Yvonne, I need your email address to include you in the giveaway. And yes, it's a great Grandma-granddaughter book.

This book sounds amazing. I started collecting rocks and seed pods as a kid, and still collect them to this day. I would love an opportunity to to win this book.