The Next Step: The Editorial Letter

A few weeks ago I posted my You're Almost in Labor! blog. I shared that the next step in my publishing journey was engaging Deborah Halverson to help get my "baby" ready to send to agents and/or publishers.

As I waited for her feedback and editorial letter, I got nervous. What if she didn't like HALF-TRUTHS? Or worse, what if she liked the concept but suggested a major overhaul? I've been there a few times and didn't want to go back.

When I told Deborah how I felt, she tried to reassure me. "Don’t feel worried. It’s a great story. My job is to help it to its best incarnation, so readers can get the most enjoyment from it. This is about moving it forward!"

My good friend Linda Phillips tried to reason with me. "You want Deborah to be tough; that’s what you paid her for, and it will only make it better.  And since this is a one-time deal, you want her to give you as many suggestions as possible and then you can spend the time making the corrections."

I knew Linda was right and I reread Deborah's email a few times. But still, "what if's" plagued me the whole night before I anticipated receiving Deborah's letter. I literally tossed and turned that night in bed.

But guess what? The next day, when I received Deborah's editorial letter, I teared up. Deborah not only deeply understood what I was trying to accomplish, but she also called my characters sweet and said it was easy to root for their dreams and for their friendship!

As I read through her letter I knew that every single one of her points were what she had promised--editorial suggestions that would move Half-Truths forward. 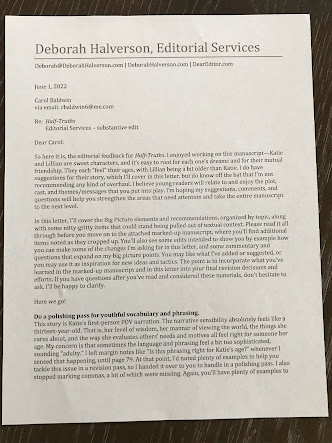 That night I couldn't sleep because I was so excited that her suggestions were ones I could implement!!

Some of you are readers and curious about the steps involved in writing and publishing a book. Others of you are also writers. For both groups of blog readers, I thought I'd share some of Deborah's points that resonated with me.

I was happy to hear that the way Kate sees the world was consistent for a thirteen-year-old. But when I started looking through the manuscript, I was surprised at the many examples of "adulty" language that Deborah found! Descriptions like "grim eyes" or "his furrowed brow" or an action like, "I inhale a whiff of lavender" all take readers out of a young teen's POV. It'll be fun to track down these words and translate them into more teen-like vocabulary.

One of the things I'd included in the manuscript were Kate's poems. For me, they were exercises in getting more in touch with Kate's thoughts and emotions. They had been my side writing technique, as Mary Jane Nirdlinger wrote about in a recent Carolinas-SCBWI blog. But as Deborah observed,

When I wailed to Linda that I didn't know how I could take out my beloved poems, Linda (who IS a poet and wasn't impressed with my poems but was too nice to say that) excitedly pointed out ways in which those poems could be recycled as narrative or -- maybe even articles which Kate writes. Stay tuned.

I was concerned I didn't have enough stakes in the story. In a stroke of genius, Deborah showed me how to empower Kate, give her more skin in the game, and solve a sub-plot point problem. Sorry, I don't have a quote to substantiate this third point. As they say, you'll have to read the book!
Deborah made several other observations which will strengthen the story. By the time you get to hold HALF-TRUTHS in your hand (as so many of you said you wanted to do-thank you!) those changes (and others) will be integrated into the final product.
I appreciate sharing my story-behind-my story with all of you. As Elliot Kurta said after I sent him the editorial letter, "Writing a book is a complicated business!"
****
Congratulations to Janet Sheets who won SOUNDS ALL AROUND.
at June 04, 2022

It is so exciting to see the letter that you got. She gets your story and it is good. Her suggestions seems sensible to me. I love knowing someone before their book is published. The behind-the-scenes part is fascinating, and I know it is nerve-wracking. Congratulations!
Gwen

Thanks, Gwen! As a former librarian and an avid reader, your support means a lot!

I don't blame you for worrying. How wonderful that she understood what you wanted out of your story and had suggestions to do just that!

So often when we hand over our words to others for critique, fear comes into play as we wait for the results. I'm glad the results reaffirmed your belief in your story and that you came out the other side with insights that felt right. Happy revisioning!

I’m honored to be so quotable, my friend. But mostly I’m excited that this point in time has finally arrived for you and Half Truths! Hooray!

You are honorable, LInda! Thanks for all your encouragement--and truth speaking--along the way!

You said that so well, Jilanne! I appreciate your support.

It's great fun for me to read about your writing and revision journey. I know I use too many "adultisms" as I try to portray a male protagonist who is intelligent. Getting the 13-year-old voice is challenging. Beth

Congratulations on getting such wonderful feedback, and thanks for sharing! It sounds like Half-truths is in pretty good shape and it won't take long to tweak it. Looking forward to your next post on your writing journey!

Thank you, Valerina! I appreciate your support. Working, working! But having fun too!

Getting a positive editorial letter really reaffirms you are on the right track. I hope you will post more about your writing journey. Thanks for featuring your post on MMGM.

It sure does, and thanks, Greg. I will!

This is a huge step for your book, Carol. Congrats on getting so many good suggestions and seeing your way forward. Thanks for sharing this.

Carol, so excited for you and rejoicing with you that this editor has done for you exactly what you needed and wanted! Onward!

thanks Rosi and whoever "unknown" is--Deborah's notes are just what I needed!

Dear Carol,
This is awesome! So happy for you.

You really received some excellent feedback. Her comments were really helpful -- especially her comments about the poet.

You're right about that, Patricia!