In April, Elliott Kurta reviewed Doreen Berger's science fiction middle-grade novel, The Captain's Daughters. In this post, he reviews the sequel and interviews the author. 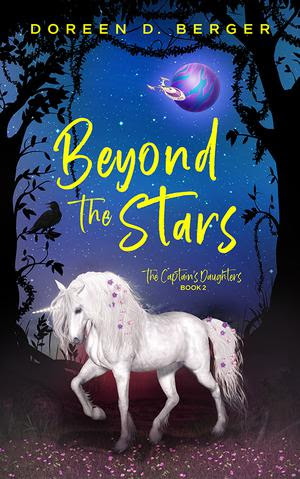 In Beyond the Stars by Doreen Berger, twin sisters, and troublemakers Robin and Diane are back, this time with a new friend. In this adventure, their father has asked them to welcome a new arrival to the Polaris, the starship he captains. The sisters quickly befriend their visitor, Jannel, who’s the young future ruler of Lasusia. She has been sent to the starship to wait out a mysterious and lethal virus that’s been spreading across her planet until a cure can be engineered. When the friends decide to take a day trip to the planet, an accident ends up stranding the three of them there. Now infected with the virus, Robin and Diane are in a race to get back to the Polaris before they’re left to the same fate as the rest of the planet.

As Diane and Robin catch the virus, they discover that it isn’t what it appears to be. With the fate of the planet resting on them, the girls will have to outwit a new enemy and make it back to the starship before the secret behind the disease dies along with them.

Combining science fiction with fantasy, Beyond the Stars is a more playful take on similar works like Star Wars or Star Trek, with an immersive, realistic universe and exciting action sequences that include strong emotional undertones. Robin and Diane, with their unique perspectives and mischievous minds, are the ideal protagonists to introduce kids to sci-fi. But while their adventures may appeal to elementary schoolers, the subject matter of the book is more appropriate for older middle schoolers. Beyond the Stars is more complicated than the prequel, The Captain’s Daughters, as it not only shows the sisters developing an interest in the boys aboard the Polaris but also struggling with their emotions about their father’s relationship with a woman. Additionally, Robin and Diane are kidnapped twice and infected with a lethal pathogen over the course of this story, which might upset younger readers. Still, the cheery protagonists and their antics keep this story upbeat despite all of the emotional scenes and challenges they face.

Robin and Diane make excellent tour guides of an imaginative, expansive galaxy, and are one of many unique characters. Seeing Doreen Berger’s characters interact is often entertaining, and many of the conversations help push the story forward. However, there’s often a general lack of contractions in most exchanges, leading to conversations that sound unrealistic.

All in all, Beyond the Stars, is the quintessential sci-fi novel for any mature middle-schooler or teen. Packed with laughter and jokes while still taking the reader on a riveting ride through the stars, this story will not disappoint. But despite all the new planets and fascinating alien species, Robin and Diane are what set this book apart from any other. The unlikely heroines are the defining features of The Captain’s Daughters series, capable of conveying shockingly authentic emotions that make even an impossible scenario, like being trapped in an alien world, seem real and relatable. Beyond the Stars may attract readers with a blend of adventure and alien worlds, but it’ll be Diane and Robin that makes them decide to keep reading. 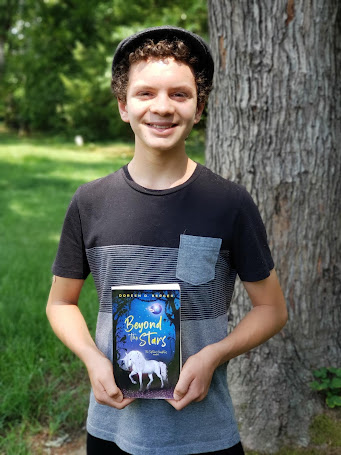 ELLIOTT: What inspired the plot of Beyond the Stars?

DOREEN: Diane and Robin are caring young girls who like to help people, so I came up with a plot that would allow them to do this. Believe it or not, the plot was conceived long before the COVID-19 pandemic and it did not influence the plot at all.

ELLIOTT: Do you have further plans for The Captain’s Daughters series?

DOREEN: Yes, I would like to write a third book! Ideas are floating around in my head!

ELLIOTT: What was your favorite part to write?

DOREEN: My favorite part of the book takes place on Masilon when Diane and Robin are lost in the forest and come upon the unicorn. I think it adds a bit of wonder and awe to the book.

ELLIOTT: Which scene was the hardest to write?

DOREEN: The hardest part to write was Diane’s anger toward her father and the confusion she and Robin felt about their father’s involvement with Joanna, a past love he reconnects with.

DOREEN: To be honest, I really wanted to keep them young, but in the long run I felt it would add more depth to their characters for them to mature and have new experiences.

ELLIOTT: Beyond the Stars features two fictional planets; Masilon and Lasusia. How did you come up with such original worlds, and what influenced the creation of both?

DOREEN: Both planets came from my imagination! Years of reading and watching science-fiction helped to pay a part in how I think about alien worlds and how they might differ from ours…and how similar they might be to ours.

ELLIOTT: How much of Beyond the Stars is based on real science? For example, the Polaris, an enormous starship that Diane and Robin’s father captains, is a remarkable example of some of the futuristic technology in Beyond the Stars. What sort of research did you do before designing the Polaris?

DOREEN: Again, most is from my imagination and what I would like to see on a starship of the future. I really don’t know how much of it is realistic, but it is certainly something I like to dream about! The great thing about writing futuristic science fiction is that anything is possible!

GIVEAWAY
Leave a comment with your email address by August 6 and I'll enter your name in the giveaway. U.S. addresses only. All comments must be approved before they are published. Be patient and you'll see yours published too! Congratulations to Claudia Friddell who won STELLA.
You'll find other great MG books on Greg Pattridge's MMGM blog. Check it out! 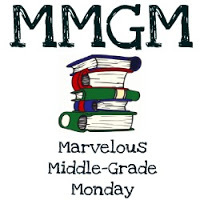 I love reading sci-fi and this review makes this book sound like a real page turner. The main characters sound so well done too.

Thanks Danielle. The giveaway starts with you!

Another great review! Sounds like my great granddaughter would enjoy this series. I love anything that has unicorns in the story. Have you read Keeper of the Lost Cities series -- main character is a girl, but plenty of boys in this series -- my absolute favorite fantasy! Disney Hyperion has bought the rights for a movie.

Another stellar review, Elliott! The interview was also well done and insightful. I have the first book on my radar and have added this one. Keep up the great work on your writing and thanks for being a past of MMGM. (No need to enter me in the giveaway as I am on a list to read the books.)

Thanks Greg and Patricia, for leaving such encouraging comments for Elliott! Patricia, I added your name to the giveaway.

Another wonderful review from Elliott and a terrific interview with lots of information. Thanks for such a great post. I will pass on the giveaway.

Thanks for another great review, Elliot, and I really enjoyed the interview. Unfortunately I am not eligible for the giveaway :( (probably just as well given the length of my TBR!).

Thanks, Valinora, for leaving a comment! Elliott and I appreciate that.

Another fun book to put on my list. Thanks for the interview, Elliot. I enjoyed reading it.

Thanks, Carol. I appreciate your support.

I am happy to announce that Annette Whipple, author, and speaker is Write2Ignite 's next Master Class teacher. Check out her wonderful b... 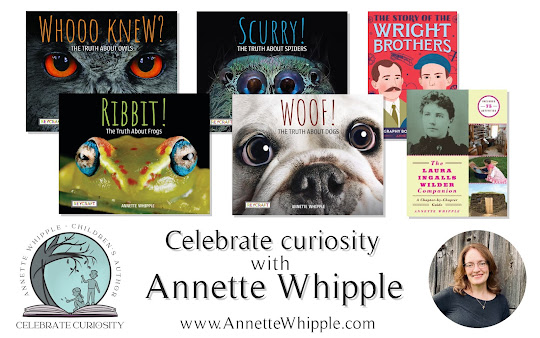