Congratulations to Becky Scharnhorst for winning A Tough Act to Follow and Acting Innocent and to Mel Hager for winning WONDERLAND. 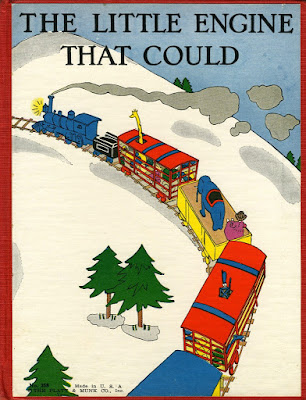 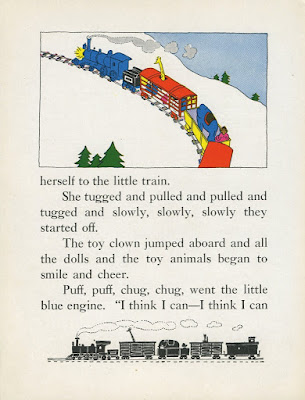 Fast forward 60 years. I’m a grandmother with dozens of articles and two non-fiction books under my belt. For the last ten years I’ve been working on my first young adult novel, Half-Truths. I have revised the story fourteen times; not including the hundreds of times I’ve rewritten scenes and chapters.

Did I know what I was getting into when I first started this project? Definitely not.

So, besides hearing the little blue engine in my head, what has kept me going for all these years? What keeps me chugging along from one revision to another?

Plus, a healthy dose of belief in my story.

Take a minute to list your definition of perseverance as it relates to your writing career. Here’s mine:

1. Not giving up on a reasonable goal.

2. Making sure that my goal is God-honoring and worth completing.

3. Not allowing myself to be distracted from that goal by other activities.

4. Being willing to sacrifice (time, ego, money, etc.) to complete my goal.

Now, consider what is the opposite of perseverance? In other words, what will keep you from being the little blue engine who climbs that "I'm published!' mountain?

Here are some obstacles I thought of:

1. Abandoning the idea because it takes too much time and effort.

2. Listening to self-doubts and fears.

3. Listening to the nay-sayers who mock the goal.

4. Not being willing to make changes suggested by serious, constructive feedback.

6. Not having the tools and abilities to reach your goal AND not trying to obtain them. (i.e., diligently practicing all types of writing, take classes, attend conferences, join a critique group)

7. Rejections from agents and/or publishers.

When I began my novel, I didn’t know what I didn’t know. But I had an idea that I loved: a story set in the early 50’s in Charlotte, North Carolina about the unlikely friendship between Kate Dinsmore, the granddaughter of a rich, society woman, and Lillian Harris, her grandmother’s teenage black help. Their friendship uncovers a century worth of secrets, including their shared ancestry.

Although I’d written two non-fiction books, when I began Half-Truths, I didn’t know how to write a novel. So, I did what you’re supposed to do: I read craft books, attended writing conferences, and received dozens of critiques. I also didn’t know much about African American or southern history. So, I read books (many of which are listed here) and interviewed African Americans who lived in Charlotte during the time period. Each book and interview took time, but they all enriched my work.

One of the influential books I listened to was Eyes on the Prize: America’s Civil Rights Years 1954-1965 by Juan Williams. Besides giving me a fuller understanding of the scope of the civil rights struggle, it also provided a meaningful example of perseverance.

Civil rights activists, including Martin Luther King, had their eyes on the prize of obtaining equal rights for blacks. Did they always know what they were getting into? Maybe not. Certainly some, like Dr. King, Medgar Evers, and the protestors who were beaten and imprisoned, ended up losing more than they’d anticipated. But did they believe in the equality they were working towards?

Without a doubt, they did.

I for one, am glad they persevered.

My need to persevere as a writer is minuscule compared to those who unfailingly fought for equality and persevered in the face of discrimination, danger, and death.

But, as I begin the next step of my publishing journey—finding an agent--I have a plan: I must persevere. I have no choice.

And I must believe in my story.

I'm looking forward to being able to repeat the little blue engine's refrain as she came down the mountain: 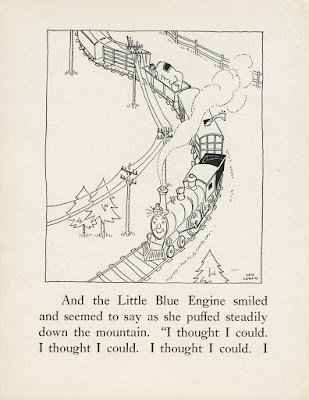 What about you? How will you persevere in meeting your writing goals in 2019?

If you are reading this blog and aren't a writer, I'd love to hear your stories of perseverance also!

Email ThisBlogThis!Share to TwitterShare to FacebookShare to Pinterest
Labels: books that inspire us as children, inspired by civil rights activists, Martin Luther King, perseverance, The Little Engine That Could, writing journey

I'm not a writer but wanted to post that I enjoyed your timely post today as we honor MLK. Thank you.

Perseverance! My, oh my! I went back to college to finish my degree when I was 35 years old! My kids were aged 5, 12, 16. My first two courses were basic college chemistry (I had a science based major and figured I needed to refresh that first) and a remedial algebra class ( the junior college wouldn’t even let me take college math because I failed the college’s pretest). My goal was to be a registered dietitian by age 40. Ended up taking me a little longer, but I never quit, even took summer classes because I was afraid if I stopped...well, then I would stop! During that time, the oldest daughter received her Bachelors degree and I received my M.S. in Nutririon and Dietetics when my son graduated from college.
Things that stand out in my memory: hours and many miles of commuting to Northern Illinois University, life being manageable until mid semester and then it was like treading water to stay afloat until semester end, my husband washed the kitchen floor for me once (he did lots of things for me, but I’ll never forget the floor washing), my daughter calling “Mom!” When she saw me on campus once and everyone turned to look, walking across the stage to receive my diploma and having my name announced along with my maiden name (a tribute to my parents who tried me to believe in education as important.
Perseverance/dogged determination got me through it all.

Thanks Linda and Jo Lynn. What a great story of perseverance, Jo Lynn! Love the "hello
Mom" part as well as Charlie washing the kitchen floor!

Never give up! You'll do it, Carol. I'm sure of it. As for me, I like to think that my perseverance to tell stories in the face of adversity shows my son how to go after the things that he wants.

Thanks, Jilanne. And that's a great reason to persevere !

This is such a great post-especially as I'm looking at the year ahead and trying to decide what I'd like to accomplish. We need to always make sure we are putting God first and honoring Him with what we do!

I love hearing about your writing journey! You're a great reminder to not give up, no matter how many drafts it takes!

Thanks, Helena! Great to hear from you and glad the post was useful.

What perfect timing, Carol. I was just sitting down to work on my latest revision of a novel I wrote at least six years ago. Like you, I have been through the discouragements and doubts, but I'm still in there because I believe in my story. Thank you for giving me the pep talk I needed this morning.

Thanks, Gretchen! I am glad you are working on your novel and that my blog post gave you a post. Keep on, keeping on!!!

Carol, your perseverance is inspiring. I'm excited to see each new train stop of your journey. I will continue to cheer you on! <3

I'm so glad you found it encouraging, Kathleen! And I love the train stop analogy. I hadn't thought of that!

Love this post, Carol! Perseverance is definitely something we both have in common!

Yes, Dorothy--as well as being sisters in Christ!! See you at "our table" one day!!

Early on I had this quote from a dear friend posted in my office.

"Never give up! If you do, you'll never know how close you came to realizing your dream!"

Now, it's back to revising the novel I started in the late 1990's! It WILL be done this year!

YEs, It will be done!

Keep on, keeping on Sandra!

Oh my, Carol! What a coincidence for me to read your post at this time. I am veering off in a new direction with my writing and just started drafting my own blog about the struggle, also with a reference to the Little Engine. Since I started publishing children’s books 5 years ago, my mantra has been to “Just Do It!” Leaving that genre for adult fiction feels right for mr but also super-scary. Thanks for sharing your journey!

Thanks, Cat. So glad it was helpful. And how funny that years later we are connected by the Little Engine!!

Wonderful post, Carol. That book was one of my favorites too! Still is. I can often be found muttering, I think I can, I think I can :) Never give up. But one thing I've learned is to also let it out into the world and move onto the next story...there are far too many who want to be let out!

I'm about to let my baby go--just a few more tweaks and it's out on submission!

That's so great to hear Carol!!! Crossing everything for Half Truths to fall into the right hands!!!

Thanks, Vijaya. You understand the journey!!