Two O'Dwyer and Grady Books and One Giveaway

Congratulations to Linda Townsend and Barbara Younger for winning copies of Run to the Light from last week's blog.

Eileen Heyes, a North Carolina author and writing instructor, sent me these two companion books. Based on her father's stories about his life in the movies during the depression, these books will appeal to readers in grades 4-7. Their fast pace and easy readability make them great choices for reluctant readers. 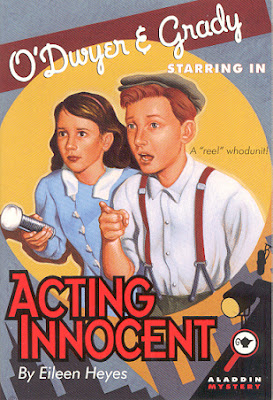 Billy O' Dwyer and Virginia Grady are eleven-year-old actors. For them, home is a movie studio and their days are filled with make-up, costumes, and re-takes--rather than with school. From the beginning the reader sees two kids who not only know how to act for the camera, but know how to put on an act for adults.

They are also super sleuths. When a movie actress is found dead and Billy's friend and mentor, Roscoe Muldoon, is declared to be the killer, Billy and Virginia decide to prove Roscoe's innocence. In a light and breezy style that moves the story along, the pair find clues, pursue red herrings, and are instrumental in finding the real murderer. 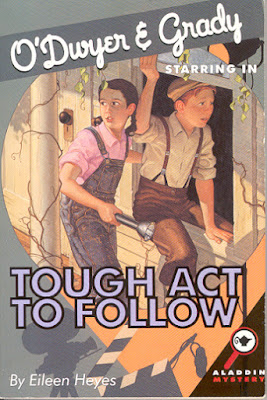 The partners are at it again. This time, they discover a skeleton while looking through an abandoned house for props for a skit. The mystery is not a whodunit like in Acting Innocent, but rather who is the rightful heir to the house and the treasure that the deceased owner (John Wilkinson) squirreled away?

The duo are divided. Virginia becomes convinced that Eddie Talbott who worked for Mr. Wilkinson because his rich, son, J.J, deserted him, should get the property.  Billy--who keeps wanting the investigation to be over and gets dragged in deeper by Virginia's love for sleuthing--feels sorry for J.J. who has been estranged from his father for several years.

On top of that, they're not even sure what the treasure--which Mr. Wilkinson wrote about in a poem--really is. The story includes fake wills, a dangerous boat chase, and of course, discovering the treasure.

The two young thespians provide enough drama to make this a page turner that both boys and girls will enjoy.

I am giving away both of these titles through Talking Story, the quarterly newsletter which Joyce Hostetter and I co-publish for educators and media specialists. Our winter issue is on Dormant Readers (also known as reluctant readers) and will come out next week. (Click here if you wish to subscribe). Leave me a comment here and I'll enter your name once. Leave a comment through the newsletter and I'll enter your name a second time. A winner will be drawn on January 21.
at January 07, 2019

Thanks for the great reviews! You reminded me how much fun I had researching family history to write these two books.

Glad to host you, Eileen! Some fortunate reader will end up with 2 super books!

These both sound like a lot of fun. Who wouldn't enjoy these mysteries? Thanks for your review.

You and Eileen have cooked up a great prize for readers who likes mysteries. I would like to ask that my name be left out of this drawing. I am tutoring a 2nd grader, but he's a little young for this and other family members are too old. Hope someone wins who is super excited!

Thanks for your comment, Linda. Next week's giveaway might be of interest to your 2nd grade student!

They sound like fun reads. I remember reading books of this type when I was a child.

I know one of your grands (or more!) will like these books!

You're in, Sarah! You'll love these!

I love the covers of these books! They look just like some that I would have read oh, so many years ago! Thanks for the chance to win!
Blessings,
Connie

Thanks, Connie. You're in!

Thanks, Rosi. You're in!

I have a 4th grader and a 5th grader who I think would really enjoy both of these! Thanks for sharing them with us!

Thanks, Becky, for persisting with my blog. You're in!