I hope you enjoyed your holiday as much as I did. Mine was full of family and good food; now I'm back into my writing routine including sharing more books with you. Sandra Warren won Miep and the Famous Diary and Voices: The Final Hours of Joan of Arc. Barbara Younger won Everyone Says Meow and Susan Rice won America, Here I Come!

I'll start the new year with a review of Lisa Fowler's debut middle grade book, Snakes and Stones (Sky Pony, 2016). I'm holding onto my copy so I can review Fowler's great use of dialect, narration, and voice, but see below for Lisa's generous offer. 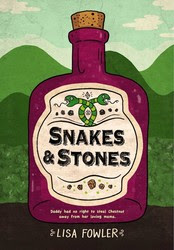 You may have heard how a book's setting can act like a character in a story. Although the setting for this book changes as twelve-year-old Chestnut Hill and her younger triplet siblings (Hazel, Filbert, and Macadamia) and their traveling salesman father go from southern town to southern town peddling his elixir, it also stays the same. It's 1921 and their old horse-drawn circus wagon is their home, storefront, and stage for their "show." Chestnut's job--which she hates--is to testify that the elixir has worked for her and to spot the doubters in the crowd.

When her family isn't working a crowd, Chestnut tries to keep order among her siblings, convince her father that selling his fake elixir is a lie, and somehow make it back to their mother--who will fix everything. All of this is told in Fowler's love-for-the-North Carolina-mountains voice. Chestnut's Southern narration helps create the setting for the book. Here's an example from the beginning:


I'm crouched in the corner of the wagon, huddled on top of the triplets the same way a mother hen would gather her brood up and under her wings for protection--way too much responsibility for an ordinary twelve-year-old in a dirty, torn dress, frumpled hair, and shoes with holes in them the size of Missouri. Especially a girl that's been snatched from her mama against her will. (p. 2)

Her father gets run out of one town after another and Chestnut devises a plan to help her mother find them. She tacks up flyers in each town with a picture of their wagon with the name of the elixir painted on the side, and the name of the town they're headed to. She's not proud of keeping a secret from her father, but rationalizes he's the one who taught her to lie.

Her desire to find her mama rules her day and night and leads her to a decision she regrets. Alone in a store, she sees a wide open cash register with more paper money than she can imagine. An internal dialogue ensues:


But you  need that money to buy a train ticket to get back to your mama. Girl being with her mama's not wrong. Girl going back to where she was when she got snatched away from her home's not wrong. Stealing's wrong but only if you don't have a good enough reason. (p. 115)

Suddenly, life gets a lot more complicated as Chestnut's guilt eats a hole in her gut. The family is joined by Abraham, an old friend of their father who worked the coal mines with him before they lost their jobs. He provides another perspective.


"Mama didn't do nothing. It was Daddy who stole us away. Mama went to town, and while she was in the store, Daddy run off with us."

"You sure 'bout dat?" Abraham asks with raised eyebrows and more questions than answers on his face.


Abraham reveals that he and her father were raised together in an orphanage. Slowly, Chestnut begins to see her father in a new light. When he is put in jail because he's falsely accused of stealing the money which Chestnut took, her life unravels.

Without including a spoiler, her mother's return isn't at all what Chestnut imagined. Truth is spoken between her and her father. Forgiveness is given and received. The reader is left with a sense of closure for a story that will resonate in hearts and minds after the book ends.

Lisa Fowler's apt use of similes and metaphors makes the book a pleasure to read. Descriptions like, "My face is as hot as a fresh-pulled log from a fire." (p. 129); "Once we're in the heart of town, Daddy hops from the wagon and weaves like a bobwhite in an open field, trying his best to see if anyone's watching." (p.66); "Everyone knows adults stick together like warts on the back of an old toad." (p. 181) inspire me as a writer and add to the authenticity of this middle grade historical fiction.

Lisa is giving away a personally autographed copy of this book. Please leave me a comment (with your email address) by 6 PM on January 4th to enter. Share this on social media (or follow my blog) and I'll enter your name twice.

This book has such a unique perspective--the life of the children of a snake oil salesman.

I'm curious if the father speaks like Abraham since they grew up in the same orphanage. That's a very strong dialect. Is it unique to a specific location? For instance, if Abraham is a coal miner, is that what coal miners sounded like? Or is that supposed the dialect of a black southerner? If so, did expert readers check for authenticity?

Good questions, Theresa. Abraham and the father speak differently. I'll ask Lisa Fowler to respond to your question. You're in the giveaway --thanks.

As a lover of historical fiction I am certainly drawn to your review. As I started reading it and saw that Chestnut thought that her mother would fix everything, I wondered if this would really happen; you later implied that this isn't the case.
Sounds like a great read for all of us!
Happy New Year!
Connie
cps1950(at)gmail(dot)com

Thank you for the chance to win a signed copy! I love reading middle grade and this book is going on my TBR. dhammelef(at)yahoo(dot)com I already follow your wonderful and informative blog and I shared on tumblr: https://yesreaderwriterpoetmusician.tumblr.com/post/189998841232/snakes-stones-a-middle-grade-review-and

Thanks Danielle and Connie. You're both loyal followers and you're in the giveaway--Danielle, thanks for sharing on Tumbler.

Thank you, Theresa, for your great questions which I’ll do my best to answer.
Abraham and Chestnut’s daddy did indeed spend time together in the same orphanage. Just how much time the reader is not told, simply that they were together in an orphanage in their younger years.
I love Abraham, and have always felt (spoiler alert) he’s the real hero of the story, helping Chestnut to see the world as it really is. His delightful speech pattern is indicative of the many wonderful folks I was privileged to spend time with growing up, and is as comfortable to me as the speech patterns of any of the folks native to Western North Carolina and the surrounding Great Smoky Mountains. I will tell you that prior to the publishing of Snakes and Stones my editor also had questions as to the authenticity of Abraham’s “voice.” I gave her the same answer that I have given you, that his was a speech pattern extremely familiar, and that I was being as authentic in replicating his pattern as I possibly could be. Keep in mind that the time in which the story takes place, and in which I grew up were very different times than the ones in which we now live. But that’s the great thing about historical fiction, isn’t it? It allows us - even in small ways - to preserve the rich heritage that makes this country so great. Thank you again for your questions. I hope I’ve answered them to your satisfaction and that you enjoy reading Snakes and Stones as much as I enjoyed writing it.

You know I can't resist good historical fiction, and this one sounds really good. Thanks for telling me about it. I will be looking for this one.

You always do such a great job of drawing me in and making me want to read whatever book you are reviewing. This one is no exception. What a unique premise! I’ll be requesting it from my library. I can’t wait to read what happens between Chestnut and her dad. Thanks for sharing this with us!

Thanks, Lisa, for your honest response to Theresa's question. This is a tricky business! And thanks Becky, for your compliment about my blog. I aim to pique a reader's interest and glad that I did just that for you! If you don't win the book, requesting it from the library is a great idea. That helps writers too.

Thanks for your detailed response, Lisa. I appreciate it. Linguistics has always fascinated me. And I know there's always a lot of discussion around using dialect respectfully and authentically.

I love this dialogue on my blog, Theresa and Lisa!

I love North Carolina mountain stories, and your reply about dialogue, Lisa, fits what I believe about preserving the heritage. Good job.

Gretchen, you will love this story! Happy to add your name to the list.

Thanks, Gretchen, and good luck!

This looks like a wonderful story for the middle grade students at my school. I'm always looking for books to read excerpts from to my 4th and 5th graders, to get them excited to read for themselves. And when there is a southern voice, I am particularly happy to use my southern voice. Would be a great addition to our school library!

You just made it in, Gwen. I was about to end the giveaway! I think your students will really enjoy it. Very authentic!

Great book! I adore Lisa Fowler's writing style. Her voice is like no other.