Bionic Beasts by Jolene Gutiérrez: A Giveaway and A Mini-Author Interview

In the last few weeks, I've featured picture books for young readers. Today, I'm happy to help launch Jolene Gutierrez's debut middle-grade nonfiction book, Bionic Beasts (Lerner Books, 2020) Since it's full of photographs, it's technically a picture book too--but this isn't a book for young readers. The challenging and informative text will be appreciated by students in grades 5-8; particularly by those who love animals and are possibly considering a career working with animals. 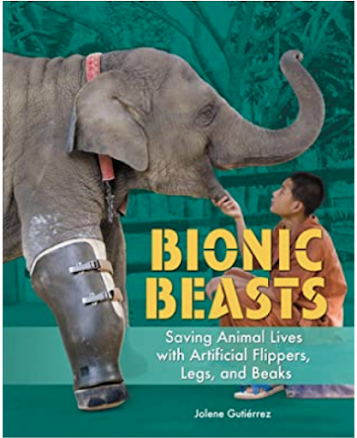 In the pages of this unique book, readers will meet remarkable animals and the doctors and students who used modern technology to enable them to live normal lives. Here are the five main characters: Lola, a Kemp ridley sea turtle with a missing flipper;  Mosha, an Asian elephant who stepped on a land mine; Cassidy, a three-legged German Shepherd; Vitória, a greylag goose who had lost most of her beak; and Pirate, a Berkshire-Tamworth pig who was born with a fused tarsal joint in his hock. All of the animals needed extraordinary veterinary intervention which they received.
Each section of the book includes facts about the animals, the patient's history, environmental dangers the animal faced, how their injury affected their body, and how prosthetists, orthotists, veterinarians, and engineering students developed materials, prostheses, and even a fake beak! Every section concludes with an activity that enhances the reader's comprehension.
Lola, an endangered turtle who lives in the Gulf of Mexico weighed less than an ounce when she was found on Mustang Island, Texas. She was fitted with a tracking device that was the size of a grain of rice.  Her right flipper had to be amputated leaving her unable to swim in a straight line. Students at Worcester Polytech Institute wanted to create a replacement flipper--and that's exactly what they did! Although Lola will always live in an aquarium, as a result of several determined college students, she can now gracefully swim and dive. 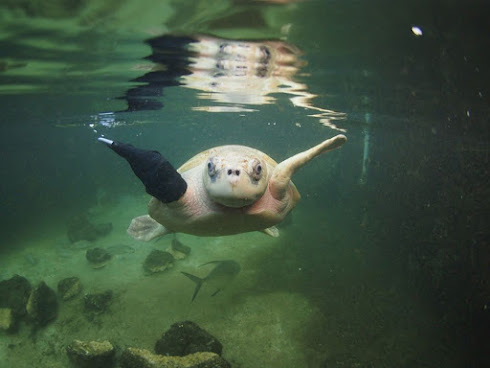 Mosha, as pictured on the front of the book, was fitted with a prosthesis--but she outgrew them thirteen times! As she grows, she needs to be fitted with a new prosthesis every six months. She lives in the Friends of the Asian Elephant hospital where she socializes with other elephants and her human caregiver. 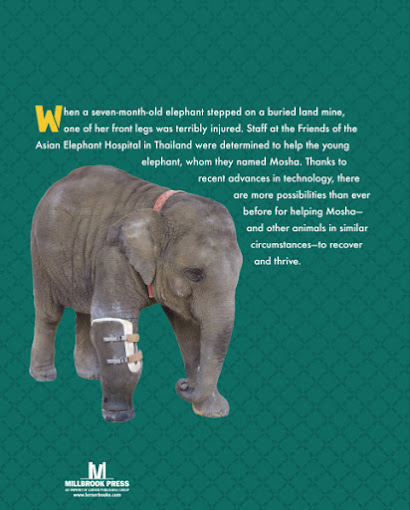 No one knew how the rescue dog, Cassidy, lost his leg. All that his prospective owner knew was that he wanted to save him from being euthanized. Although he gained weight and grew back his hair after moving in with his family, Cassidy struggled to walk. At first, Cassidy was fitted with a removable prosthetic leg but he kept kicking them off. Finally, he was fitted with a metal prosthesis that was implanted into his leg bone.  Osseointegration was not without risks. But the surgery, performed at North Carolina's State University College of Veterinary Medicine, was successful. The process of creating an endoprosthesis was complicated, but here was the final result:

Vitória, a greylag goose was found off the coast of Brazil in 2015. It was missing part of its beak and was brought to the Friends of the Sea where she was cared for by a biologist and environmental technologist. Although she learned to trust him, she couldn't feed properly and he sought the help of a veterinary team called Animal Avengers. They had to engineer a top and bottom beak so that Vitória could eat and preen. Using sophisticated software, the team created her new beak and attached it during a two-hour surgery.  That first beak was too heavy and using photogrammetry, the team created a prosthesis that was one third the original size. 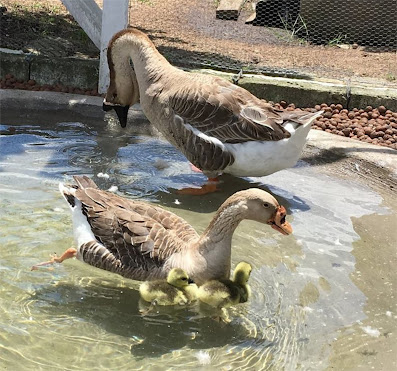 https://en.wikipedia.org/wiki/Victoria_(goose)
Here she is with her mate and goslings!
Pirate, a Berkshire-Tamworth pig, was born with a right-hand leg that was permanently bent at a 90 angle.  A veterinarian suggested that the piglet would need a hybrid orthosis-prosthesis to support his leg. As of a year ago, Pirate was 500 pounds and wearing his fourth device, designed by a man who had made orthosis for dogs and humans--but never for a pig! 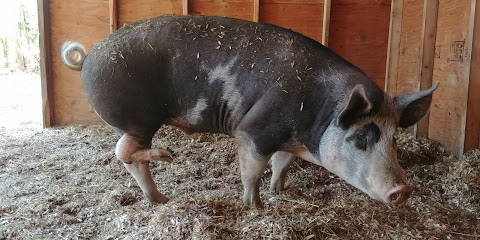 CAROL: How did you end up writing a book about bionic animals?
JOLENE: Carol Hinz, my editor at Lerner, put out a call for STEM picture books in the spring of 2018 (I heard it through my SCBWI chapter-Rocky Mountain). I submitted a < 1,000-word picture book titled BIONIC BEASTS to her, and she told me she loved it but wondered if I'd be willing to make it a middle grade with 5 chapters (plus an intro and conclusion) about 5 different animals. The book is now ~10,000 words and researching each chapter was like writing a separate book because I had to track down the people involved with the stories, they had to be willing to share their stories (some weren't), there had to be photos available for Lerner to use, etc.
I chose to write about animals being helped through technology because I grew up on a farm and in a community where injured animals, runts, etc. were routinely put down. I spent years of my childhood arguing, crying, and protesting that. This book is my way of honoring the kind-hearted, skilled people who have stepped up around the world to help animals who need their support. 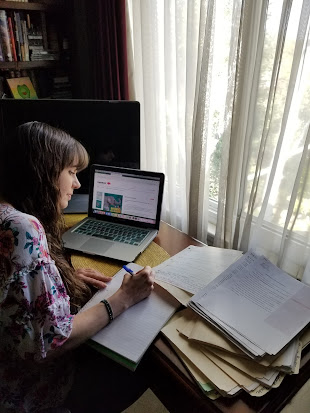 Jolene worked through piles of files papers as she sorted out her research.

Bionic Beasts will make a great curriculum resource for the 5-8th grade classroom or homeschool family. Please click here for a link to the teaching guide. The author provides information on technology, science, veterinary medicine, and environmental issues in a very accessible manner. The activities at the end of each chapter reinforce students' learning.
Here is a short video of one of my granddaughters building a robotic hand, the activity associated with Mosha.

Please leave a comment (and your email address if you are new to my blog) I will enter your name. Winner will be drawn on Ocober 9.
at October 07, 2020

Sounds like the perfect book for teaching and enjoyment. Children who love pets and intriguing facts will want to read it, even if they don't like to read! Thank you for sharing.
Connie
cps1950(at)gmail(dot)com

Oh I NEED this book for my 12-year-old granddaughter who wants to be a veterinarian. It sounds like a great teacher resource, too and I would have it on my shelf if I were still teaching. Thanks for the review, Carol

Thanks Connie, Nora, and LInda. YOu're all in!

Congratulations to Jolene on such a fabulous debut! Kids will love this.
And a shout out to Libbie for creating a bionic hand!
Enter me in the giveaway please.

Bionic Beasts seems like a very interesting book both for content and having photos for middle grade readers. Intriguing.

Thank you Joyce and Bridgett. YOur names are in!

I, too, grew up on a farm like that, and I don't think I've ever recovered. I'm so glad you wrote this book of your heart. That makes it even more poignant. I'm suggesting this book to my son's former elementary school librarian and to the SFPL. It doesn't look like they have it on order. Cheers!

I love nonfiction books like this--animals are my favorite topic. I read another similar book about an eagle that needed a new beak and the solution a scientist had was a 3-D printer. Just amazing. Thanks for the chance!

Looks like a great book for kids who want to work with animals.

Thank you Lois, Danielle, and Jilanne!

Oh what a fascinating topic. I know I'll enjoy sharing this with my nephew.
turtle6422 at gmail dot com

It is a GREAT book, Jana Leah!

My animal-loving grands will LOVE this book. It sounds fascinating!

Thanks for another GREAT REVIEW

Love the looks of this book, and know that my animal-loving middle graders will be excited for it to be part of our library.

Thank you all so much for your kind comments, and Carol, thank you for the most amazing blog post! I'm so grateful to you all for reading and Jilanne, thank you so much for asking the libraries/librarians in your life to order copies. <3 That means so much to me!!

My pleasure, JOlene. HOping for the best for this fantastic book!