Prisoner of Night and Fog--and a GIVEAWAY! 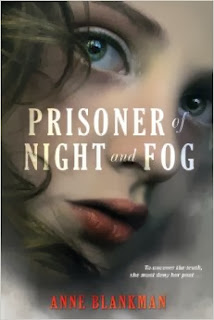 If Goodreads allowed more than 5 stars for a review I’d give Anne Blankman's debut novel, Prisoner of Night and Fog, a 6.

Blankman’s historical novel has it all: the underpinnings of extensive research, romance, mystery, beautiful language, rich characters, fast-pace and heart-pounding suspense, a terrific title and above all else—a great story.

Can you tell I loved this book?

Set in Munich, Germany in the early 1930's, this fictionalized account of the unlikely romance between Gretchen Muller, Adolf Hitler’s “pet” niece and Daniel Cohen, a handsome Jewish reporter, is a page-turner that will keep you awake at night.

Out of nowhere, Daniel interrupts Gretchen’s  “normal” with the information that her father’s death was not as a martyr as the Nazis have portrayed it. It was murder. When Gretchen sets out on a dangerous journey to discover the truth, her innocent reverence for Hitler (Uncle Dolf) is ripped away and she begins to see the evil underbelly of his schemes.

I don’t want to spoil this book for you so I’ll just share two favorite passages, from among many.

One of Gretchen's antagonists is her brother, Reinhard, who has mistreated her since childhood. When Gretchen discovers that her mother refuses to support her dream to attend a university and study to become a doctor in lieu of supporting Reinhard, she thinks:

"...The decision had been made. Reinhard had gotten his way, as he always did; they were forced to circle around him like dying planets, and he the sun whose magnetic pull directed their rotation  was the glowing orb that might blaze into uncontrollable brightness at any moment." (p. 79)

When Daniel confronts her naivety about not seeing how Hitler planned to exterminate the Jews she remembers,

"Uncle Dolf had promised their enemies would vanish into the night and fog. Just as in Goethe's famous poem Der Erlkonig, 'The Alder King.'

"She had recited the poem to Uncle Dolf as they sat in the parlor together last year, sipping apple-peel tea while the old ladies knitted, and he had smiled, for he loved the tale about the super-natural being  who attacked a boy held in his father's arms as they rode on horseback through the night-darkened countryside.
'My son, why do you hide your face so anxiously?'
'Father, do you not see the Alder king?
The Alder King with crown and train'
'My son, it's a wisp of fog.'" (pp. 179-80)

Joyce Hostetter and I are giving away an ARC of Prisoner of Night and Fog in this issue of Talking Story. Click on the link and you’ll find directions (under "Giveaways") for how to enter.  While you’re there, take a look around at the other resources we offer on the topic of Children and War.

Next week Anne will share some of her secrets of how she wove together Prisoner of Night and Fog.  I'll be giving away a second ARC courtesy of Tracey Adams at Adams Literary.

Just in case you need additional incentive to pre-order a book which I am convinced will be an award winner this year, here is the trailer:

I've got,the ARC sitting right here, and I,can WAIT to read it after Veronica's. So looking forward to it, especially after reading this!!!! :)

It's just too, too bad I can't enter my own contest. But I look forward to your interview with Anne. And I'll be buying a copy of this book.

Well, Joyce. I will be giving another ARC away next week. Stay tuned!

Wow. I can't wait to read this incredible sounding story. I loved the description, the sample of writing and the book trailer. I will also enjoy reading Anne's interview.
Thanks for sharing , Carol.

Oh, my, this one sounds terrific. It will definitely go on my TBR list right away.

Thanks Rosi and SHeri! Sheri, if you want to enter this week's giveaway you need to do it through the Talking Story newsletter. Or just wait until next week and enter then. You'll both love it!

Please enter my name in the book give away.

Can't wait to read this book by fellow OneFourKidLiter . Thanks for the enticing review, Carol.

Thanks Gail and LInda. You're in!

I love historical fiction! This book sounds so terrific. I'm glad you loved it, Carol!

Great review - and thank you!

Alyssa @ The Eater of Books!

Alyssa, I'll add your name to the list. and if you don't win this week, I'll be giving away another ARC on my next blog. Thanks for entering.

Yes, this sounds like a "must read." I recently won a book from another of your blog give aways; so I will pass on entering. Tough decision, but I want to be fair.

I wanted you and Joyce to know that this issue of Talking Story is great! Way to go, ladies.

Thanks, Linda for putting others first. And I'll forward your comment to Joyce. Make sure you forward Talking Story to your teacher/librarian friends too! :) Carol