Writing Resources Part III: Panster vs. Plotter and a Giveaway!

Congratulations to Vijaya Bodach who won James Scott Bell's book, The Art of War for Writers.

*******
I recently completed reading, My Brother's Shadow by Monica Schroeder. When I wrote to Monica and asked her if she would share a few nuggets of wisdom for my readers, she sent the following article which first appeared on writingteennovels.com. 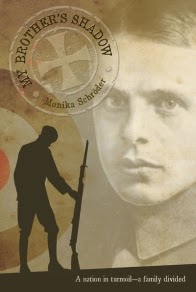 It has been said that there are those writers who plan and those who “fly by the seats of their pants.” I am part of the second group and before I began working on my novel, My Brother’s Shadow, I only had a rough idea of who Moritz, the main character, was and what would happen in the story.

I rewrote the beginning in past tense but couldn’t force Moritz to tell his story in hindsight, so I stuck to the immediacy of present tense. The story is set in 1918 Berlin. I needed to convey a lot of background information. It seemed such a daunting task to introduce the reader to starvation and despair in Berlin as well as the anticipation of military defeat without the omniscient perspective of third person POV.

In the first chapter I needed to set the stage, let Moritz introduce himself and his family, and find an intriguing ending to the chapter that would entice readers to go on. Moritz came to my rescue. As an apprentice in a print shop of a Berlin newspaper he could read the headlines of the paper he just helped print and thereby inform the readers of my novel of the state of affairs in Germany in October 1918.  The newspaper became a vehicle to disseminate information about the setting without interrupting the flow of the narrative. Moritz also meets Herr Goldman, a journalist with the paper who takes a liking to Moritz and ultimately helps him to fulfil his dream to become a reporter.  Moritz is able to tell the reader about the most pressing and newsworthy current events through his conversations with Herr Goldman. Apparently there was a way for me to write in first person, present tense and still give the reader a sense of the setting.

About halfway in, the story took an unexpected turn and once again I had trouble letting myself deviate from my original plan. Moritz had met a girl who had completely flummoxed him with her wit. Granted, it was not so unlikely that a 16-year old boy would take an interest in a girl but I had not anticipated a romance.

I had never expected to write about young love. Now here was Rebecca, the smart daughter of a Jewish bookseller who attended the same political meetings as Moritz’s mother and sister. After their first encounter on the train, it was clear that they had to meet again. Yet the book takes place in 1918, so they wouldn’t go “all the way.” I was able to braid his discovery of love together with the story of Moritz’s relationship with his brother, who returns from the trenches a maimed and bitter veteran. Rebecca’s presence even gave me the opportunity for a hopeful conclusion to leave readers satisfied after Moritz’s intense final confrontation with his brother.

Writing My Brother’s Shadow has taught me to trust the process along the way. A quote by E. L. Doctorow showed me that I am not alone with this approach: “Writing is like driving a car at night. You never see further than your headlights, but you can make the whole trip that way.”

I enjoy hearing other writers describe their journeys and find it interesting to compare them to my own. When I first started Half-Truths I was definitely a panster--I had no idea where I was going or what I was doing. Unlike Monika though, I had several years of false starts and finding my way. Somewhere between the second and third draft I realized I need an outline so that both girls could have their own stories.  Now, I can't operate without one! These roadmaps help me to see where I'm going and how to get there--but I still discover some surprises along the way.

I also experimented with point of view and tense until I settled on two protagonists, each written in first person and present tense. None of these decisions have been easy.
*****
To win an autographed copy of In My Brother's Shadow please leave me your name along with your email address if you are new to this blog. Let me know some of the difficult decisions you've had to make with your WIP and I'll enter your name twice. Hurry! I'm drawing a name on Thursday, February 5!
at February 02, 2015

I have enjoyed reading about the Monika's thought process writing this novel. I have never written a book but I have been involved in decisions concerning my work and it sometimes has been a long process.
Thanks for this giveaway.
Connie
cps1950@gmail.com

Yes, Connie, it is a long process. I'll start the giveaway list with your name--two times for your effort in decision making!

Thanks Carol for featuring Monica, a girl after my own heart. Try as I will, I can't seem to jump totally over into the plotter's camp. I love driving like Doctorow!

Carol,
I have written and rewritten a picture book manuscript that I still believe in. I took the PB Dummy Challenge from SCBWI-C and an agent critique was part of the course. I learned that my story is all over the place, but for some reason, I think I know where my focus should be now. I hope so. I'm getting closer!

You know I understand, LInda. I hope you keep plugging away!

Dear Carol, thanks for sharing Monika's thouht process and a part in which the book didn't seem to follow her original plan. I have written parts of a story in first person and in third person to help me decide which rang true for my story.

Good luck to you in writing and marketing your manuscript.

I've been there--done that, Joan. thanks for stopping by. I'll enter your name twice in this giveaway.

Leave my name out of the hat please. I already have Monika's book ... reading about her process was very enjoyable.

Thanks, Vijaya, for stopping by and commenting.

Writing historical nonfiction for years dictated that I be a planner. Not quite the same as a plotter, but close. What a sense of freedom came with my move back into writing fiction! I don't exactly write "by the seat of my pants," because planning comes naturally to me now. But in my first novel, a murder mystery, I just "knew" who was behind the murder. About a third of the way through, however, I found out I had been wrong. How exciting that day was!!

Janet, Thanks for your comment. I love surprises--even when I've plotted and planned. Or maybe because I have plotted!

Great article. It's interesting to me how much control our characters have in the writing process. Thanks for sharing this. The book sounds fascinating and although I'm trying not to enter contests for books since I have so many, I just can't resist this one. Please put my name in the hat.

Glad you enjoyed this, Rosi. Your name is in the hat!

Great post. I'm a pantser, though I have written myself into many many corners, so I try to plot.

I'd love too win a copy.

Thanks for stopping by, Robin. Your name is in twice!

Congratulations to the winners! I hope you'll enjoy the book. I think I am becoming more of a planner. Or perhaps, it is just my current sip that is causing my hair to turn grey and seems to need the corsage of an outline more than my other books. Sad thing is, that even with the attempted outline, it still feels like "driving in the dark."

Thanks again, Monika, for your informative post. I think we all have to find our way--and find out what works for our stories!

Carol, Sorry I am trying to catch up on blog posts from the past month. But I have loved your resource series. Thank you for sharing some great books. Also, enjoyed Monika's information about her writing style for My Brother's Shadow.