Wonder at the Edge of the World- and a Giveaway!

To be honest, at first I didn't think about historical fantasy being a genre until I read Wonder at the Edge of the World by Nicole Helget and was contemplating how I wanted to review it. But then I realized I've read many books with both historical and magical elements--although typically they take place prior to the 20th century. 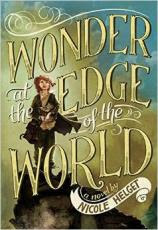 Set in Kansas right before the Civil War, this is the story of how a young girl, Hallelujah Wonder; and her best friend, Eustace, who is a slave, deliver a dangerous Medicine Head to the cold depths of Antarctica to prevent a Captain Greeney, a wicked Navy captain from using it to work evil.

In a nutshell, these are the historical and magical elements of this middle grade book that is a story of adventure, friendship, and sacrifice.

The reader gets a great glimpse into Hallelujah's (who prefers to be called Lu) character when she tells the reader that she intends to be "the first lady scientist in Kansas--maybe the only scientist at all in this sunbaked, throny-plant, tree-lonely, dirty-water, skinny-animal, dusty-air, grasshopper-happy, God-forsaken place." (p. 8,9) We also find out that her role model is her father who Captain Greeney murdered. He was not only a great explorer who discovered Antarctica, but he brought home a number of valuable artifacts. So valuable that they are hidden in a cave which only Lu and Eustace know about.

One of the artifacts, the Medicine Head that talks, can only be heard by certain individuals--including Lu. Bundled in a crate with the instructions, "KEEP COOL. DO NOT DESTROY!" Lu feels the head calling to her. When she can't resist touching it, she sees visions from the past; including images of Captain Greeney pursuing her father in order to possess the Medicine Head's power.

With Captain Greeney on her trail, but now knowing all of the Head's powers, Lu decides it's her job to get the Head to Antarctica--where it is cold and will never be destroyed.

At the same time, pre-Civil War unrest infiltrates Tolerone, her midwest town. A fight between the Abolitionists and slave owners leads to a devastating fire leaving Eustace temporarily without a master. Recognizing that this is a once in a lifetime opportunity to be free, Eustace leaves Kansas with Lu on her quest to take the Medicine Head to Antarctica.

Like I said, the story mixes fantasy with history and I enjoyed the historical parts the best--which shows you what kind of reader I am! I particularly appreciated how Lu describes the changes she sees in Eustace after leaving Kansas and arriving in New Bedford, Massachusetts where they hope to find passage to Antarctica:
"Eustace is walking funny. He moves through the lanes of New Bedford with a confidence I never saw in him at home." (p. 206)

Seeing Eustace's freedom through Lu's eyes tells the reader a lot about both characters:

I wonder if he's looking around and thinking about all the possibilities he has. All those things had had hoped for his life, about being a cowboy or a scientist, are suddenly possible. I feel happy for him. But I feel a bit of unhappiness, too. I know that at some point, our journey, successful or not, will be over, and Eustace and I will have to separate. (p. 218)

When Lu finally rids herself of the Medicine Head, she's no longer a prisoner to its whims. She has found her freedom; in the same way that Eustace has found his.

*******
To win a copy of this novel for yourself or for a middle grade reader, leave me a comment by 6 PM on Wednesday, July 29. If you want to increase your chance of winning, please share on Facebook or Twitter and let me know in your comment which you did.


I am a history buff and I especially love the Civil War era, so I think that I will also enjoy the historical aspect of this story better. Thanks for calling my attention to this book.
Connie
I shared on Twitter.
https://twitter.com/cps1950/status/625670239712346112

Thanks for the commentary and for the book give away, Carol. I've also shared your post on Facebook.

Thanks, Lisa. You're in twice!

Historical fantasy, huh? I can see it becoming a genre - something where fantasy bumps up against historical events. I've read some things like that before, but since it doesn't fit an existing genre these kinds of stories get swept off into the fantasy/science fiction category and are lost in the crowd. I know Bob Mayer writes some hard action/thriller stuff that has elements of fantasy. It might be a lucrative new genre to promote, especially since not many are strictly doing that kind of thing. If it comes right down to it a lot of the Christian future history things like the "Left Behind" books are sort of a future history/fantasy genre in themselves. Anyway, historical fantasy sounds like it would be fun to write.

I love Lu's voice. Also her full name, although I see why it would be shortened to Lu. Thanks Carol, for the heads up on this book.

thanks for commenting, Joyce!

Thanks Tom, for your comment. And yes, the Christian future history things are also part fantasy. Interesting observation! I'll add your name to the list.

Dear Carol,
I tweeted a link to this great blog post of yours and I also posted one to my Joan Y. Edwards Author page on Facebook.

It was fascinating to read about the story and about the genre - Historical Fantasy.

Thanks for always sharing interesting things.

Thanks , Joan. Your name is in three times!

Great contest. Thank for the opportunity.

Thanks Kristina, for posting on Twitter. Your name is in twice!

I love historical fiction. I also know Nicole from growing up in the same town. I am excited to read her new book.

Tonya- thanks for your comment. I forgot to remind folks to leave me their email address in case your name is pulled. I also will need Tom Kings' and Kristina's. Picking a winner this evening! Carol

Thanks Carol for introducing me to the historical fiction/fantasy genre. Sound like WONERS AT THE EDGE OF THE WORLD has just the right combination of the two.

Looks like you're catching up on your blog reading, Kathleen. Thanks for making my blog part of the places you visit!

Carol,
Too late for the contest, but not to late to comment on a unique book. I think this combination would appeal to young readers. Interesting. Terrific review.

Thanks, Linda. Hope you can check this book out at your local library!