Congratulations to Tonya Goettl who won Wonder at the Edge of the World in last week's giveaway. Stay tuned for another great giveaway coming up soon. But first, two posts about Alan Gratz's middle grade Holocaust book.

I'm going to tell you from the start this review contains spoilers. It's a story driven by a young boy's desire and need to survive. But of course, the spoiler is implied by the very nature of this book. Prisoner B-3087 by North Carolina author Alan Gratz, is based on the true story of Jack Greuner, an Holocaust survivor. 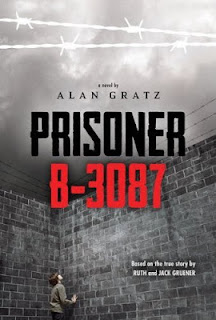 The book opens in 1939 in Kraków, Poland. Yanek Gruener (much later he changes his name to Jack) is ten-years-old and his father doesn't believe that Hitler's invasion of Poland will last for more than six months.

His family soon finds out how deadly wrong he is.

In magnificent prose that combines accurate details from Yanek's life with historical research, Alan Gratz has woven together a painful-but-true portrayal of a young boy's determination to survive which carried him through ten concentration camps in six horrific years.

Within three years the family goes from rationing; to losing jobs, their synagogue, and access to schools; to being sealed off within the walls of the ghetto. Life is horrible, but at least Yanek has his family around him. After his secret bar-mitzvah, he is terrified when the sick and elderly are killed. He thinks,


I was a man and I wanted to do something. Something to stop the Nazis. To save my family. I asked myself over and over again what I could do to help, but I had no answer. p.50

He argues that his family should not give in to the Nazi's demand to be "selected" and buys more time for them all. But one day he comes home and witnesses his parents being brutally herded away by the Nazi soldiers.

Yankee is sent to the Płaszów concentration camp and is amazed to find his Uncle Moshe who gives him survival instructions:


From now on, you have no name, no personality, no family, no friends. Do you understand? Nothing to identify you, nothing to care about. Not if you want to survive…We have only one purpose now: survive. Survive at all costs, Yanek. We cannot let these monsters tear us from the pages of the world. (pp. 68, 70)

As Yanek is packed into cattle cars and moved from one concentration camp to another he learns what he must do to survive:
Yanek clings to the smallest "comforts" in his pursuit of survival:


I stood at the water pump, scrubbing my body. It was bitterly cold out, but I didn't care. I would scrub my body, I decided, each and every morning, no matter how cold it was, no matter how tired I was. I was alive, and I meant to stay that way.

…I paid careful attention to where I had been tattooed. Too many others had let their tattoos get infected, and that had taken them to the camp surgeon. You didn't want to go to the camp surgeon. Ever. I even rubbed my teeth with my wet fingers--we had not toothbrushes or toothpaste, of course, but it felt important to remember what it was like to be human. (p. 136)

As the war ends, Yanek's will to survive does not:

The war had come to Dachau, and any moment a shell or a bomb might fall on our building and kill us all. So many times I had wished for a bomb to fall on me, to end my suffering, but now I prayed that no bomb would hit me. Not now, when I was so close to the end! If only I could survive a little longer, I thought, just a little longer-- (p. 242)

As I said in the beginning of this review, it is obvious that Yanek Gruener does survive. So, it's not a spoiler to quote the last lines of this memorable book:

I stepped on board the train and didn't look back. For nine years I had done everything I could to survive. Not it was time to live. (p.256)

Next week Alan shares his process of writing Prisoner B-3087 and what it has meant to him both personally and professionally. To whet your appetite, here is a video of Alan with Jack and his wife Ruth, that Scholastic created.

Next week Alan shares his process of writing Prisoner B-3087 and what it has meant to him both personally and professionally. To whet your appetite, here is a video of Alan with Jack and his wife Ruth, that Scholastic created.

Thanks Carol for featuring this important work by Alan Gratz. I can't wait to read it!

Thanks, Linda. It's a great book.

Gotta have a copy. Will Alan be signing copies at the SCBWI-C Fall Conference?

You will "enjoy" it, Linda. As much as we can enjoy books on the Holocaust.

This sounds like an amazing and important book. Thanks for the review. I will be looking for it.

Great post, Carol. Alan does a great job in the book and all his others. Really enjoyed the video.

Wow! This looks like a powerful story of a time none of us should ever forget.

Congratulations Alan! No wonder it's receiving such acclaim.

Thank you for posting this, Carol.

Thanks Deb and Sandra, for taking the time to read this post. Yes--the video is pretty cool, for sure!

What an incredibly haunting story that needed to be told! I look forward to reading it and even moreso because a fellow SCBWI Carolinas author :)

Thanks, Kathleen. I bet you can get a copy of this book--and Alan's autograph--at the conference!